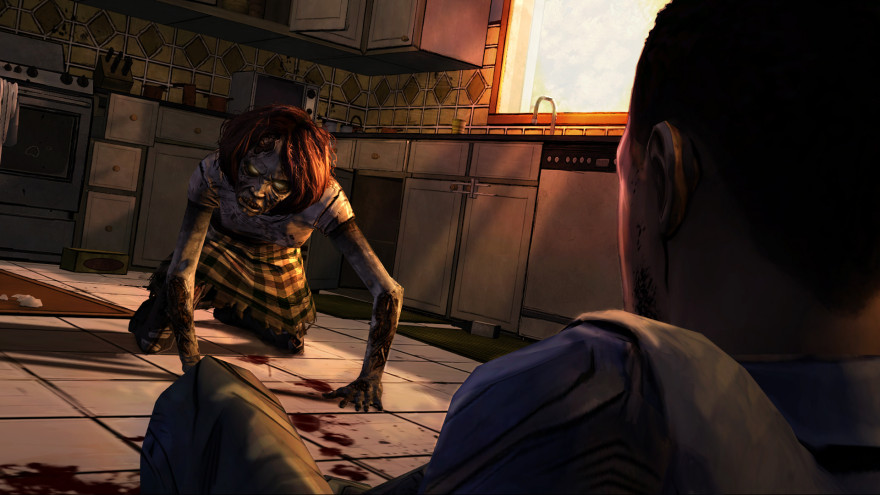 Scores have been a part of video games from the start. Pong kept track of which player won the most points against the other, and the arcade scene was founded in part on the prestige of high score rankings. Scores facilitate a competitive social atmosphere around the games that use them. Players quickly learn which in-game actions yield the most points, and exploit those formulas in hopes that their initials might climb up to the number one slot for all to see.

At a basic level, video games function as exchanges of mathematical values, making for mineable data aplenty. A selection of those figures are surfaced for players as “points” that accumulate for higher total scores, and act as an incentivizing force in gameplay. Scores don’t make sense for every game though, especially those with a more narrative mechanical focus. However, that doesn’t mean that there isn’t certain value that can be added to story-driven games by informing the players of particular strands of data.

The Walking Dead, for example, is a much-lauded zombie survival game which was released in five episodes over the course of several months last year. The game operates as a type of choose-your-own-adventure story, asking the player to make quick decisions about what to say from the provided dialogue options. One of The Walking Dead’s greatest successes is that every choice is a new dilemma, eschewing “good” and “bad” options in favor of choices that are all a matter of perspective. Early on in the game you have to choose between saving one character over another, and there’s no right answer. Neither character is more evil or virtuous than the other, yet you still have to choose. There is no score or upgrade system, either—just the decisions you make and the relationships you forge as a result.

At the end of each episode of The Walking Dead, you’re presented with the statistics that reveal the global percentages of players’ decisions from key points in the game. While most of the game’s choices weigh in around the 40-60% range, a few stats register outside the norm. When the results categorized me as average or in an overwhelming majority I felt justified in my actions without giving a second thought. However, the few times when I was in a significant minority—as at one turning point in episode 4—I dove back into my thought process to pick apart my logic in a desperate attempt to justify to why I did what I did.

Dmitri Williams, a USC professor and CEO of metrics and analytics company Ninja Metrics, explained my reaction to the stat screen as “the theory of social proof” in action. When presented with this kind of data “most people look at the actions of others and take that as proof of the way they’re supposed to act,” he told me.

The Walking Dead’s stat screen goes a step further, playing off the themes of “in” and “out” groups in its tense, zombie-filled narrative.

Turns out, most people express self-doubt or defensiveness when faced with data that places them on the fringes of the bell curve, and “that if you’re different from the herd, it feels unnatural.” So even though I’m not actively playing with other people, the decisions of other players end up framing my play experience as I reflect back upon it.

The stat screens in The Walking Dead turn the single-player game into a social experience. While the same could be said for the high score list in Frogger or any other old arcade game, The Walking Dead’s stat screen goes a step further, playing off the themes of “in” and “out” groups in its tense, zombie-filled narrative. Deciding when to side with the group and when to go against the majority mentality isn’t just a matter of wanting to fit in or not; it’s a matter of staying alive. At times, to be cast out of the group means certain death, but in others, the group’s survival depends on their opinion being swayed in an unpopular direction. In this way, The Walking Dead manages to avoid “scoring systems,” but still provides relevant data for players that extends the themes of the game into a social realm.

That said, there’s more to Telltale’s data collection than the social hooks.

The company actually tracks a ton of data points beyond those big decision markers, and designed the game to reflect upon them in some subtle ways. In fact, because The Walking Dead was released episodically, Telltale could examine data from early episodes to change aspects of later ones, allowing for the kind of tight iteration schedule usually reserved for competitive games with rolling balance issues.

“This is a game that analyzes itself,” Telltale CTO Kevin Bruner told us. “With The Walking Dead, we’ve implemented a back-end server system,” Bruner continued. “We have thousands of data points on what [players] did in certain circumstances that help inform our creative process.” This helps to make every player choice in the game feel meaningful.

For example, there’s a character named Ben in the game, a well-meaning high school kid who constantly screws up. Bruner indicated that despite Ben’s questionable value in a survivalist group, most players chose to treat him kindly and offer him a chance for redemption. Seeing this data roll in from episode 2, where Ben debuts, Telltale knew that if they were to put Ben’s life in danger with the option to save him or let him die, the choice would be a no-brainer in favor of saving him for an outstanding majority of people. Since a “no-brainer” isn’t an interesting platform for choice, Ben’s character was changed in subsequent episodes to make him more morally ambiguous. The data seems to indicate that this was a successful move on Telltale’s part.

The beauty of how The Walking Dead handles data is in how reciprocative and respectful it is both of player investment and the story the developers want to tell.

The Walking Dead proves that just because a game is single-player, story-focused, and non-competitive doesn’t mean it can’t also be a profoundly data-driven, social experience. The beauty of how The Walking Dead handles data is in how reciprocative and respectful it is both of player investment and the story the developers want to tell. While big data can all too easily be implemented as a tool to exploit users, goad them into buying stuff, or artificially extend a game experience, Telltale has sidestepped all of those pitfalls by integrating data feedback as part of their game’s creative vision and staying true to their players’ trust in the process. Zombie apocalypse or no, The Walking Dead reminds us of one thing: trust is everything.