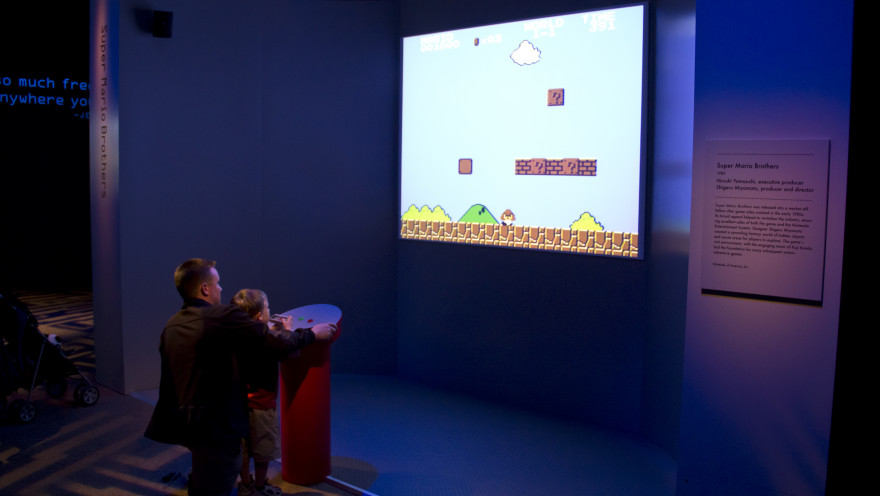 Since their birth as a science fair curiosity at Brookhaven National Laboratory in the late 1950s, video games have moved inexorably towards higher and more central cultural ground, much like film did in the first half of the 20th century. Games were confined at first to the lowbrow carnival of the arcade, but they soon spread to the middlebrow sphere of the living room, overran this private space, and burst out and upwards into the public spheres of art and academia. With prestigious universities like NYU and USC now offering graduate-level programs in game design, and major museums like MoMA, MAD, and SF MoMA beginning to acquire games and curate game exhibitions, preserving the early history of the medium appears more important than ever. But what exactly does it mean to preserve a digital game?

The answer is surprisingly simple: it means, first and foremost, preserving a record of how it was played and what it meant to its player community. Ensuring continued access to a playable version of the game through maintenance of the original hardware or emulation is less important—if it matters at all.

That, in any case, was the provocative argument Henry Lowood made at Pressing Restart, which recently brought preservationists, teachers, academics, and curators together at the NYU Poly MAGNET center for a day of “community discussions on video game preservation.” Lowood is no contrarian whippersnapper; as a curator at the Stanford Libraries, he has been professionally involved in game preservation efforts for well over a decade.

A game is not simply a piece of software.

In his talk, part of a panel on collection criteria for collecting institutions, Lowood decried the fallacy of the executable—the idea that game librarians in 2100 can sleep easy feeling they’ve done their job well so long as they can brainsync their patrons with fresh working copies of Diablo III, Bejeweled, or any other canonical game. The problem with this attitude, Lowood argued, is that a game is not simply a piece of software, but rather a historically specific site of shared experience.

It’s impossible to save the culture of a game, which is really the most important part.

Charles Pratt, who curates the annual No Quarter exhibition, is reluctant to take clear sides on a “really complicated” issue, but agrees with Lowood for blurbing purposes. “[When it comes to game preservation,] documentation is probably the most important thing,” he said. “We should preserve the apparatus of a game, but it’s impossible to save the culture of a game, which is really the most important part. With this restriction in mind, we should just try and save as much of the memories and events surrounding the game as possible.”

The value of this perspective comes into clearest focus when we think about MMOs. If we want our children to understand Everquest, should we make sure they can log onto an emulated server and kill some rats alongside a few other game history students? Or is it more important that they have access to footage of high-level play from the game’s heyday, as well as records of the game’s internet fan communities, not to mention the Everquest Widow controversies the game produced?

It’s not that the work we’re more accustomed to think of as game preservation—middle-aged electrical engineer guys hunting down obsolete CRT monitors to replace the originals in old arcade machines, hackers reverse-engineering SNES games into ROMs for us to take for granted on our Ouya emulators—has fallen out of favor in the institutional world of game preservation. These more traditional perspectives were well-represented at Pressing Restart.

JP Dyson of The Strong National Museum of Play, for instance, takes maintaining both the original hardware and software as his mandate, and likens game preservation to architectural preservation, with all the challenges and compromises that entails. Game preservation as idol worship, or radical nostalgia, or a nobly quixotic battle against the reality of the 4th dimension.

Clara Fernandez-Vara, a NYU- and MIT-affiliated game designer, talked about the value of emulation as a game design teaching tool. Though, like JP Dyson, she seemed to locate the authentic in the original physical object, her classroom experience has led her to stress a more pragmatic perspective. Playing through the whole game on the original hardware may be the ideal, but emulation not only delivers universal access to a fair approximation—Fernandez-Vara compared ROMs to facsimiles—but also converts old games from tape to CD using save states, a huge pedagogical win.

Dylan McKenzie, a game designer, curator, and a driving force behind the NYU Game Center Open Library, in many ways shares Fernandez-Vara’s pragmatic view of what it means to preserve a game and why we should bother.

“In the case of the NYU Game Center Open Library, the purpose of the collection is to enable game design education. We believe that in order to make great games our students need advanced, deep game literacy, so we’re preserving the ability of our students to develop that literacy. In order to become literate in 19th Century Russian Literature you should read books written by Russian authors from the 19th century. If you want to make psychological thriller movies watch Hitchcock films. If you want to push the boundaries of what’s possible with videogames you need to know what has already been done, and to do that you need to play games.”

For the majority of us, though, preserving the memory of games past doesn’t have the instrumental value that it does for game designers (though we do benefit from game designers knowing the history of their medium and making more original, sophisticated games as a result). But that’s not to say that it has no value at all, just that this value is more personal. Often, we most love and remember those games that remind us of a particular time in our life or a community that we used to belong to. Game preservation can help us understand ourselves and each other by preserving the memory of those communal experiences. At its best, it can help us be more empathetic, more connected to each other. Consider Generations, a game designed to last 250 years that Brice Roy presented at Pressing Restart. In this game, you and your descendants work together to build upwards, digging down into parts of the structure that your ancestors built to get the materials you need. Imagine seeing how your dad fucked up most of the levels just how you’d expect. Imagine seeing how he got level 36 just right. Imagine feeling like he was thinking of you when he did it.

Isn’t that worth preserving?