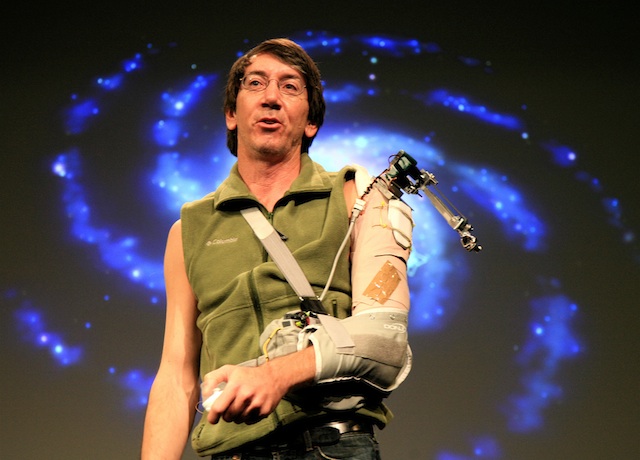 Will Wright’s reputation as an ingenious game designer was on fine display at the always wonderful Game Design Challenge at G.D.C. in San Francisco. His mind just processes information different than ours do. That’s why for the competition he dreamt up 10 Memories, a game about building your deepest memories the way you build a deck in Magic: The Gathering. And, oh yeah, it’s meant to communicate to aliens what humanity is.

But let me back up. The Game Design Challenge is an annual competition in which vanguard game developers come together to dream up radical prototypes, so the game exists in concept only, and you won’t be leaving a data record for space invaders any time soon. This year’s contest was themed around the idea that if only one game was to be left behind after human’s are extinct, what would it be?

And who better to ask than the prolific creator of The Sims, Spore, and SimCity, three games that encapsulate a wide scope of life on the planet. You could seal those three in a time capsule and call it a day, but then that would be cheating, and, granted, Wright realizes those simulations don’t represent love, hate, jealousy, prudishness, happiness, etc. He was inspired by seeing toys left on a child’s grave and the powerful emotions they evoked not only for the parent who left them there, but also for him.

A card game that created a collective consciousness of people’s memories, which would culminate in the data cloud.

Standing on stage in an aqua blue Oxford, Wright explained to an awed crowd his vision for a card game that created a collective consciousness of people’s memories, which would culminate in the data cloud created by our smart devices. The way it works is that players’ would rank their strongest, most-treasured emotions from one to ten; their first car, their first kiss, their wedding, whatever. He referred to this as “a personal memory deck.”

Then, you’d strategically ping-pong your memories with other players. One example he gave was similar to the Newlywed Game. He didn’t have the specifics nailed down, but it reminded me of a personal, emotional glass bead game. You’d exchange memories with others, empathize with them, learn about them. The memories would all pool together using some sort of fancy metrics and create a database that would, according to Wright, accurately represent what it meant to be human.

It’s a noble thought. The only problem I have with the idea is that I don’t believe that I could rank my dearest memories in any semblance of an accurate order. What matters most always seems to be shifting around, relevant to the mood I’m in and the situation. Near the end, Wright posed the question: “What is a deep way someone can envision what it’s like to be human?” I think the answer would have to consider that we are constantly, indefinitely changing.