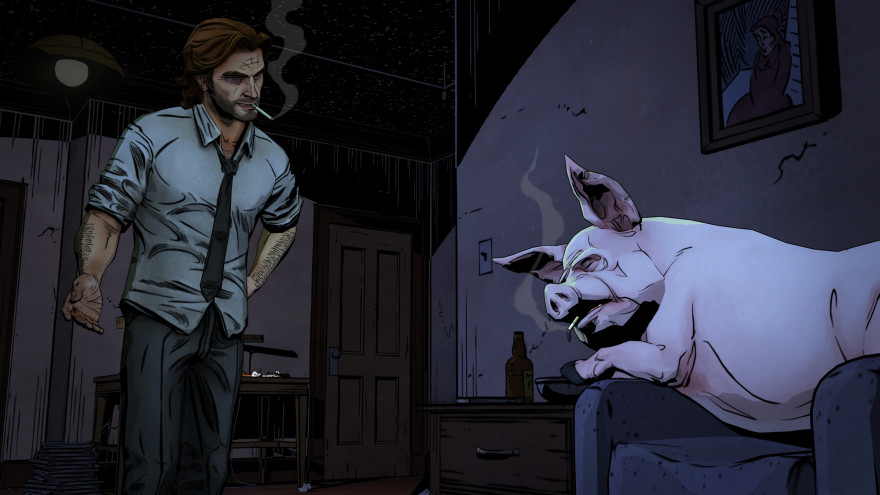 I am sitting in a hotel room near Madison Park, the lights are out, and I’m talking to a pig.

Or, rather, the pig is talking to me. We’re having a conversation about my life, specifically how I’m an uncharitable boor, destined to die alone. A cigarette dangles from his mouth and he asks for a sip of my whiskey. I down the whole thing and he saunters off in distain. “Kinda feels like a David Lynch movie, doesn’t it?” Pierre chimes in.

“Kinda feels like a David Lynch movie, doesn’t it?” Pierre chimes in.

He’s right. The strong color palette, the cel-shaded tones, and the sheer oddity of the very normal and “human” tête-à-tête with a pig make the experience feel plucked from Twin Peaks. I can almost see Log Lady entering from stage right. And to add to even the best of Lynchian contortions, it’s a videogame adaptation of a comic book series based on thousands of years of tall tales, myths, lore, and saga. I am the Big Bad Wolf in human form, I am a detective, and I inhabit the story-world known as Fables.

Created by Bill Willingham, Fables imagines the fate of modern fairy-tale characters. After being forced out of their Homeland, they repopulate Fabletown, a neighborhood nestled quietly in New York but hidden from modern-day New Yorkers. The gang’s all here: Cinderella, Beauty and the Beast, Snow White, and so on, all struggling to fit in without tearing each others’ throats out. The Wolf Among Us is the first videogame spin-off of the series, due out later this fall, and it follows the Bigby Wolf, a now-reformed Big Bad Wolf who serves as Fabletown’s sheriff.

Pierre—whose last name is Shorette—is the lead writer for Telltale on The Wolf Among Us. Like many of the team at Telltale who created the critically acclaimed Walking Dead game, Pierre loves television. In fact, The Wolf Among Us fits neatly in line with TV’s obsession with male anti-heroes. The Bigby Wolf is the inverse of Walter White: a man with a criminal past attempting to make good without too many moral lapses.

While Bigby is a detective, he’s more Sarah Linden from The Killing than Horatio Caine from CSI: Miami. Just as executive producer Veena Sud brilliantly stretched a single murder case on The Killing across two whole seasons, Shorette hopes The Wolf Among Us achieves the same type of granularity. “I think it’s more about bits and pieces,” he says. “It’s more about scene to scene.”

Specifically, there’s one sequence that’s rapt Pierre’s attention this year. It’s from the fourth episode of the first season of The Wire. More specifically, it’s the “Fuck” scene. McNulty and Bunk visit a crime scene to investigate a murder and in perhaps the greatest five minutes of American television, explore dozens of potential uses of the word “fuck.” It’s a hallmark of David Simon’s legendarily newsy terseness; it unravels the nature of deduction and inspiration. As the two Baltimore cops walk through every possible ballistic scenario, reconstructing the crime, a scene of retrospective portent and gloom unfurls. Things in subsequent seasons only complicated an already muddied picture. Life in Baltimore is not as neat as piecing together a crime on a network TV cop show.

(Note that the video is, to be clear, NSFW.)

That a single word could be so laden with meaning speaks only to why The Wire is so beloved. “It feels so good,” Pierre says of the scene. “It feels unique, and it mapped to what we’re trying to do.”

Needless to say, The Wolf Among Us isn’t quite so blue, but it’s close enough. In the first 20 minutes, there’s domestic violence, an ax to a man’s scalp, and a severed head on darkened footsteps. But Pierre and the writing team are focused less on holding your attention for hours on end, and more on creating distinct vignettes that will carry the player from sitting to sitting.

Games have always struggled with pacing, and even someone like me, who has played through dozens of amazingly slow titles, finds his attention drifting at times. We are constantly asking what’s next, what’s next, what’s next. And with a new generation of responsive game design on the horizon, in which biometric information could be pulled to make sure you’re always tuned in, finding space for silence and distance may prove to be a bigger challenge each day.

We need not always be in fifth gear.

Shorette enjoys the frenzy of Super Hexagon, but believes that players are learning to accept different types of experiences. We need not always be in fifth gear. The Walking Dead punctuated Lee’s often quotidian conversations with his co-survivors with moments of life-and-death violence and horror. With The Wolf Among Us, the stakes are lower. “There isn’t the constant threat of zombies banging on your door,” he says, “but there is a constant unease of not having a solid footing.”