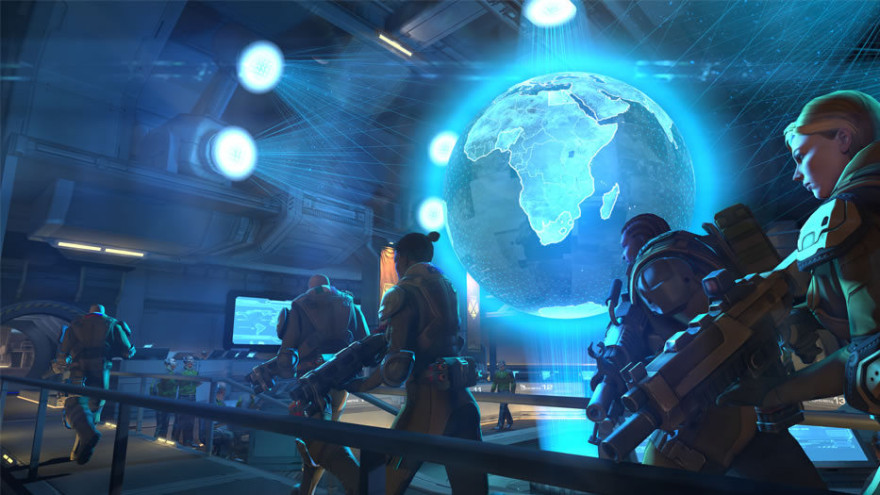 When I play a game I eventually have to sit back and ask, “Who am I?” Sometimes, the game preempts me and characters shout my name at me from early on, the game gives me the backstory before I’m even hungry for it (looking at you Killzone: Shadow Fall). Sometimes the game tries to hide it from me, complicate my identity for a big payoff down the road (eyeing you, BioShock).

And then sometimes, asking the question provides no good answer. Sometimes, that’s amazing.

She went from spraying lasers to almost exclusively making headshots.

For me, my first XCOM run will always be the story of Lt. Zarina Manana and Col. Hiroki Kimura. Manana was a recruit from South Africa and one of my best. She joined XCOM soon after the invasion and distinguished herself quickly, soaring through the ranks of my early game and eventually becoming an accomplished assault class soldier. Not long after, she became a regular on my main team. The game nicknamed her “Wednesday”, much to my bewilderment.

Kimura had been with me from the start. From the onset, I rarely took a team out into the field without him. He grew into a brilliant sniper, one of the best I’ve ever had in any playthrough. It made me incredibly happy when the game nicknamed him “Zero.”

Manana and Kimura soon became squadmates because they had become among the best at what they did. Even though the game tells me exactly how many battles they took part in (15 and 23, respectively) it feels like it was countless sorties and firefights. Through some miracle of programming, Manana became a critical hit wizard, something rare for assault-class soldiers. She went from spraying lasers to almost exclusively making headshots. So, of course, I kept putting her in more and more dangerous situations with Kimura always covering her through his shared line of sight ability.

Then, one day, on a routine mission to investigate a wreck, the unthinkable happened. I picked a good team to go out and investigate, wanting to end things quickly. As I always do, I had my troops carefully spread out and identify targets and then a combination of Kimura and themselves would kill the aliens. Just as I was about to breach the alien craft, a hulking meat tank called a “muton” burst through the hull and began to rain fire down on Manana. It did not take long for her to become critically injured, leaving me with precious few rounds to save her.

Normally, this would have been fine. I usually bring a support-class soldier with a medkit in case things get hairy and Kimura would surely kill the muton on his next turn. Except “Scotch,” my support man, was a full turn away. Then Kimura missed.

Though eventually I was able to save Manana, she was critically injured, something I found far easier to blame on Kimura than on myself. Both would be excluded from the next few missions, Manana because she was recuperating and Kimura because of me, a delusional XCOM commander.

I cared immensely for the soldiers because they had names and flags and they could die.

This is the magic of XCOM, but, more generally, it’s the magic of naming and permadeath. Kimura and Manana weren’t “friends.” The game never showed them socializing or even speaking to each other during a mission. They were barely even coworkers, simply digital pawns in my digital war to save digital humans. In fact, it’s not even as though Manana was my only or best assault unit. She simply had become my favorite. It’s true she was getting an abnormally high percentage of critical hits but my inclusion of her went beyond her utilitarian function. I liked her.

And who was I in this game? Though I was crucial to the game I was a nobody, literally with no body represented in the game. After I saved the game and quit for the night I realized the beauty of what had happened. I didn’t care about the “commander” that was supposed to be me. I didn’t care about any of the XCOM staff who talked too loudly or stereotypically. I cared immensely for the soldiers I was sending out into the field because they had names and flags and they could die. Some did die and their names adorn a small portion of base I think of as my personal hall of failure.

XCOM is a breath of fresh air in a landscape choked by games that work incredibly hard to convince you of your personal importance. They go on and on about how you are a hero of destiny whose songs will be sung for time eternal. Skyrim does an excellent job of constantly and consistently reminding you of how special you are, because apparently your mother did not. Any Legend of Zelda game is also very guilty of this by dropping the word “destiny” whenever possible and making sure that Link never loses screen time unless to develop the prophecy being invoked to make Link a person of destiny. Even the name “Link” is representative of the ploy to draw the player into this world and make her identify with this specific struggle.

We’ve been blessed with BFGs and magic powers for too long.

All of that helps to create self-important players who like to feel important—which is not necessarily a bad thing. Like any big trend or common practice there is a specific kind of joy that almost borders on schadenfreude in subverting that feeling of importance. However, as gamers we’ve been blessed with BFGs and magic powers for too long to know anything else. As humans we can’t do anything else but see the world from a forced first-person perspective. We will always be inclined to feel like the most important thing in the fictions we play in because without us the truth is that nothing would ever get done. But just because we’re necessary doesn’t mean we have to be important.

Still, games like XCOM are few and far between. It seemed like my desire to tell the stories of others might slip into dormancy. It was all too possible until the release of the expansion to XCOM: Enemy Unknown, Enemy Within. Enemy Within is pretty standard expansion fare: it rebalances the original game and introduces new units to your enemies while giving you something to counter them. This being XCOM, that something is the ability to completely transform your units via genetic or cybernetic enhancements, permanently.

Suddenly, I was paralyzed with new questions. In my new games I no longer have Manana or Kimura, something I’m glad for. I doubt I could have sent them to be altered and would have instead disgraced them by allowing them to slip into obscurity on my new teams. My new soldiers are certainly stronger and faster; they have to be to combat hulking-er, meatier tanks, but they’re also less human. They’re creations of science and technology, monsters that I’ve created. I still know their names and nationalities but now I also know that one day I will send some of them to be “enhanced.” I try not to become so attached.