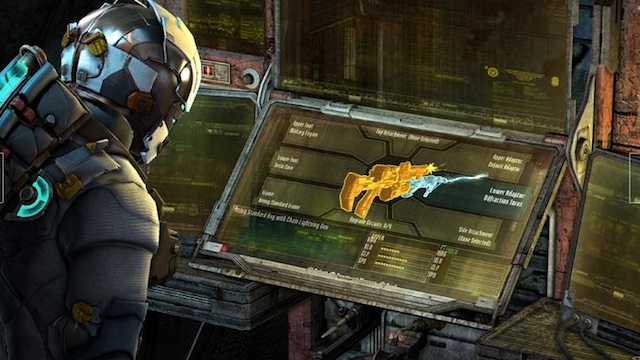 Here’s your weekly reminder that war is becoming uncannily similar to shooters.

The Germans have rolled out a sophisticated combat system known as Gladius, Latin for sword, which is not only scary-sounding, but uncomfortably videogame-esque. The initial batch of systems will let the good guys ferret out bad dudes in Afghanistan by creating a complex network that allows guns, gear, and even tanks to talk to each other on the battlefield. The communication system is exhaustive, linking into an operational loop more implements of war than I care to list here. But here’s a small sample: thermal imagers, monoculars, rifle scopes, infrared look-through devices, MG4 machine guns, AG36 grenade launchers, light anti-tank weapons, helmets, goggles, and clothing. Yes, from my understanding, that includes insulated underwear.

This apt and vital data is transmitted visually to the visors of soldiers equipped with GLaDOS, erm, Gladius, that is. It’s exactly like head’s-up-displays, a.k.a. HUDs, the invaluable overlays of information transposed in your field-of-view in your Call of Duties and Halos and other shooting games. (Just don’t expect for it to announce in a gravelly Clint Eastwood voice: Killing Spree!) According to Slate:

Anchored by a helmet mounted display (which doubles as night vision and augmented reality), a soldier can access maps, waypoints, “Blue Force Tracking” (good guys), and “Enemy Threat Reporting” and “Red Force Visualization” (bad guys). And you just know the next version will have all sorts of drone integration – bringing the eye in the sky into the helmet.

If you need further convincing that Gladius delivers the innovations of first-person shooters in real life, consider that the code name for this impressive tech was Infanterist der Zukunft, or “Future Soldier,” which ironically (or, perhaps, not so ironically) was the subtitle of 2012’s Ghost Recon game. Last spring, when I interviewed some of the guys from Red Storm Entertainment who made Ghost Recon: Future Soldier, they joked about how their game was more advanced than combat, but that no longer seems to be the case.

The game’s Authenticity Coordinator Travis Getz told me candidly, “In a way, yes, [videogames] are driving people’s expectations about what should be going on with military technology. I know from experience that a lot of military development installations are looking to games about where to go next.” And when anyone with the title of Authenticity Coordinator speaks candidly to you about weaponry, you say “yes sir” and believe it!

My conversation with those guys (who were really nice, I should add) concluded with the question: If the government called and said, “We’d like the Ghost Recon team to come work for us,” would you do it? And Travis, of course, answered yes. “[Games] are certainly a good place to look to inspire ideas,” he said. That the multi-billion dollar industry which grew out of our fun-loving pastime has inspired the development of high-tech war gadgets such as Gladius, well, it was a little disconcerting. But what can you do about it?