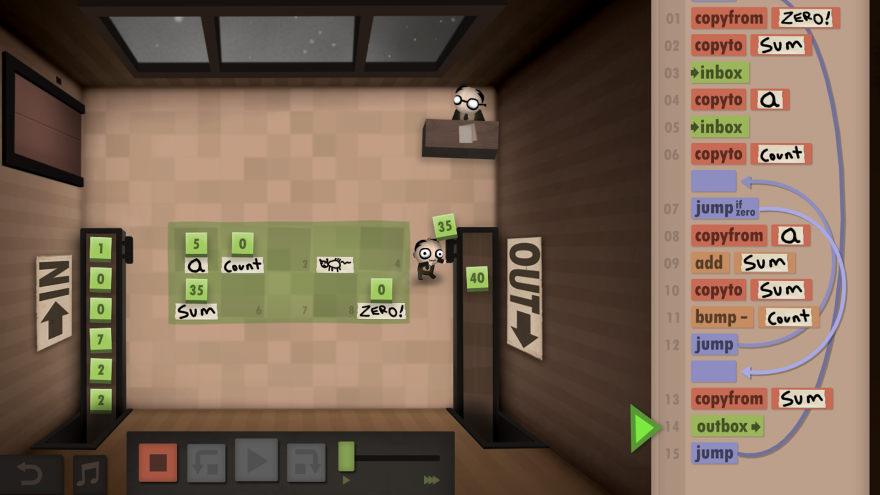 What will you do when the robots take your job? It’s only a matter of time until we’re all melted down and shoveled into vats as our flesh becomes a more valuable resource than our labor. So it’s about time you start planning ahead for your (f)unemployment. Your options are severely limited to 1) learn new skills and get another job, 2) live in poverty and die in a gutter, and 3) become an automated human.

the soul-sucking state of employment under uncaring corporations.

Sorry, what was that? An automated human? I know, I’ve never considered this as an option before now, but Tomorrow Corporation’s upcoming puzzle game Human Resource Machine is all about it. “Are you irrelevant in today’s modern workplace?” its website asks us. “Try automating your work,” it suggests. Genius. If we out-machine the machines surely they cannot take our jobs, right?

Let’s hear this idea out, then. It is as it sounds: human office workers are programmed to autonomously perform repetitive tasks. And if that doesn’t sound too dissimilar to your current job requirements then, hey, that’s probably the point. It’s certainly not beyond Tomorrow Corporation, the creators of the surprising and satirical Little Inferno, to make social commentary through a videogame, all be it an easy jab at the soul-sucking state of employment under uncaring corporations. Anyway, programming humans is what Human Resource Machine has you doing, over and over, as you try to meet the demands of your boss in order to get promoted up the floors of a drab skyscraper.

On each level of this tower you have a small office that contains one office worker, an inbox and an outbox, and a few slots on the floor that can store boxes to be used later. The idea is that this office is replication of a simple computer except its machine parts are, well, human.

Boxes arrive on the inbox’s treadmill and contain various data and functions. You can have the worker pick up and carry these boxes, one at a time, to the slots or the outbox in order to meet the demands of the instruction your boss issues, thus solving the puzzle. To do this, you’ll need to automate the action in your office worker by dragging-and-dropping commands in a sidebar on the right-side of the screen so they know what to do. You start with two commands but will progress until you have 11 in total, which Tomorrow Corporation says is “enough to simulate almost any computer algorithm in the world.”

each promotion is the same dull job only harder

From the distant glance we’re currently afforded, Human Resource Machine seems to be a game that goes towards teaching you how to program. But it also has grim implications in how it does this that reflect the current state of affairs for some office workers stuck in crappy data entry jobs and the like. You program your worker to steadily climb up the corporate ladder by performing monotonous work, which probably leaves them feeling rather empty. The motivation here is the promise of job promotion and a better life, but this falsities of this rear their ugly head when you realize that each promotion is the same dull job only harder, and each floor you ascend represents that a year in time has passed. At that rate, by the time you get anywhere near the top you’ll be at death’s door. And that’s only if you’re fortunate enough to employed for long enough to see that ill fate, as the ultimate threat here is that you’re laid off and replaced by a machine. Yeesh.

Knowing Tomorrow Corporation, and despite the studio considering this a small experiment, there’s probably more to Human Resource Machine than even that. We’ll get to find out when it comes out later this summer.

You can pre-order and find out more about Human Resource Machine on its website.