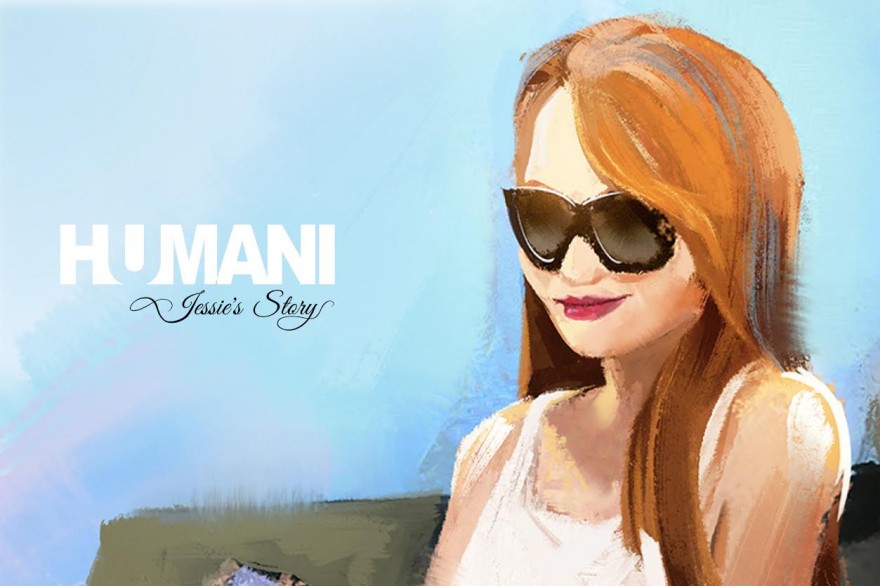 Jessie came into my life a couple of weeks ago. She was announced by her creators at PullString at the beginning of April as part of a conversation-based narrative game called Humani: Jessie’s Story, which you play on Facebook Messenger. You only need to say “hi” to meet Jessie, who is a 20-something girl who is not only experiencing a quarter-life crisis, but also looking for a job, a boyfriend, and a new apartment — all in the same day. You go along for the ride.

As Jessie gives you the lowdown on how to get to a job interview, how to find the best shared house, or how to escape from her friend’s boyfriend after invading his flat, you may feel like you’re simply helping one of your friends and not actually talking to a chat bot. Besides the fact that the conversations in Humani are very well written, using a popular messaging service like Facebook Messenger makes it feel remarkably closer to our everyday online chats.

Rod Humble, chief creative officer at PullString, says they are still interested in using other apps for the next releases. “Humani: Jessie’s Story represents our plan to offer future products to broader audiences on a variety of platforms,” he says. “In the future you can expect to see PullString conversation-based games on several messaging services and platforms, such as Skype, Slack and others.”

Humble goes on to say that PullString’s goal was always to create a new form of entertainment and bring conversation to as many digital and physical characters as possible. Humani: Jessie’s Story is both the latest reflection of that goal and also an important asset for chat bots and AI development. “I think this will become a commonplace in the same way as interacting with a computer is now,” says Humble. “If you buy into that concept —and more and more people are certainly starting to —then it seems obvious to me as an artist that we should use chat bots to create new kinds of art and storytelling.” Humble also believes that, “in many ways, this is a very ancient tradition that we have lost, the notion that you can guide and question the storyteller or even the hero within a story.” He adds that this is “a powerful tool which goes back to the Homeric tradition.”

they wished that Jessie could be their real friend

PullString knew, since the beginning of the project, that they wanted the experience to be “light and comedic.” Humble says part of that decision was “the desire to take advantage of the text/chat format itself, which lends itself to these types of exchanges.” It’s in approaching the narrative from this angle that led to Humani becoming an exploration of different types of characters and situations heavily based on the tropes of contemporary sitcoms and movies. “We settled on a young, urban woman having a quarter-life crisis and generally trying to make her way through the world,” says Humble. “You’ll see the basic absurdity of Jessie’s situations reflected in such sitcoms as New Girl (2011-present) and Broad City (2009-2011), in movies like Bridesmaids (2011), and embodied by actresses like Amy Schumer and Kristen Wiig. All of those served as an inspiration for the character of Jessie and the game experience itself.”

While Humani being located on Facebook Messenger achieves that feeling of it being part of our reality, PullString made concessions to make sure it didn’t feel too real. For instance, images are illustrations rather than photographs, and Jessie only has a fan page and not a personal profile on Facebook. The reason for this is that they wanted to take Jessie to “a fun, lighthearted place,” and are not looking for Jessie “to pass the Turing test or for people to think of her as a real person, but to immerse them into the life of a fascinating character during a particularly eventful day in her life.”

This means Jessie has limitations. She is not an open-world chatbot, although she has several possibilities when in her dialogue. If you don’t help her to choose between one option or the other, she will repeat the question until you make one . Also, sometimes she might ask for your advice on which word should she use for research or to complete a task, which can result in a sillier outcomes when, for example, you she asks for a slogan for “Butt.” Outside of this, Jessie has been designed only to tell a specific story and to “flex [PullString’s] storytelling muscles.”

Soon PullString will be making the platform used to create Humani available to other developers. Humble argues that, given the rapid emergence of chat bots, there will be a “thriving market for the PullString content authoring platform.” He says that in the past few months they have seen an explosion of interest for chat bots on communication and messaging services like Skype, Slack, and Facebook Messenger, with ends such as entertainment, customer care, and brand experiences. “Because we have spent the last four-plus years building and refining what at this point is the most advanced tool available, we feel we are in an ideal position to take advantage of the opportunity in the marketplace,” he says.

Meanwhile, Jessie has already been providing good laughs and some fine entertainment for those who enjoy her energetic personality. As a matter of fact, Humble says that some players have said they wished that Jessie could be their real friend. “There has also been an interesting reaction based on demographics,” he adds. “The language of texting turns out to be quite generational, so it is very natural for certain generations to interact by text. They are comfortable reacting to memes, emoticons, and Internet slang, which in itself is quite split by various demographics. In fact, I would suggest that Internet slang is the fastest evolving language in the world.”

You can play Humani: Jessie’s Story on your computer or mobile device, provided you have Facebook Messenger installed on it.