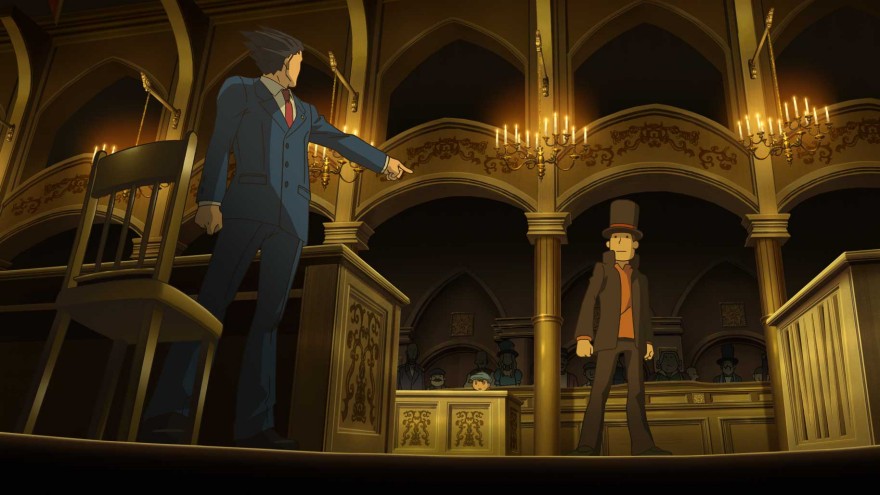 There’s something gloriously weird that sometimes occurs when two media franchises combine for a crossover story. While the antagonism implied in the title of Professor Layton vs. Phoenix Wright: Ace Attorney might bring to mind blockbuster (and inconsistently successful) calamity films like Freddy vs. Jason or Alien vs. Predator, Capcom and Level-5’s buddy flick of a portable console game actually has more in common with the more cooperative full-world mash-up of something like Who Framed Roger Rabbit?, in which characters from Disney and Warner Brothers (among other classic animation studios) shared the screen together—as if they had always existed side-by-side in a magical, brightly-colored world we had never glimpsed but somehow always knew was there.

As a play experience, the particular elements of the Professor Layton and Phoenix Wright visual novel franchises get along together as well as Layton and Wright do within the game’s story, with Layton’s archaeologist/gentleman detective investigation skills (and game mechanics) acting as the perfect complement to the comparatively more action-driven Ace Attorney trial scenes. The full-motion video scenes are expertly crafted (and may make a few players wish that the game was available as an anime film or miniseries instead of the visual novel talking heads format). The puzzles are challenging but largely forgiving of trial-and-error solutions, and the direct interaction between the player and non-player-characters in courtroom scenes is sufficiently dynamic to provide a welcome bit of accessibility to what can sometimes be an abstracted, indirect gameplay system. As a system built for story delivery, and as an imaginative space shared by two distinct creative words, everything just works beautifully. Which makes it all the more difficult as a player and a critic to try to confront the difficulties in some of the elements of the story the game chooses to use these systems to tell.

As a system built for story delivery, everything just works beautifully.

In their individual “prologues” at the beginning of Professor Layton vs. Phoenix Wright, Layton and Wright each encounter a mysterious girl named Espella who claims to be a refugee from a town whose entire history and future are contained in the pages of a magical book that Espella has managed to carry with her to London. Layton and Wright soon find themselves transported to this town, Labyrinthia, a medieval walled city where the residents claim that nothing outside the walls exists, that a man called The Storyteller dictates everything that happens, and where malevolent witches are a constant threat.

Soon, Espella is accused of witchcraft, and Wright and his assistant Maya find themselves defending Espella at her trial while Layton and his assistant Luke try to unravel the mystery of Labyrinthia and its history in order to save Espella and find a way back home. Both Layton and Wright are initially skeptical about the existence of magic, and struggle to acclimate to a world that prosecutes women as witches. The stakes, however, are made entirely clear when Wright is called into the courtroom and witnesses the end of the trial scheduled immediately before Espella’s. In a fully animated cinematic cutscene, the judge declares the accused guilty. As the accused, in abject terror, proclaims her innocence, the cage in which she is suspended transforms into a metal sarcophagus and is lowered into a pit, which explodes in flame as soon as the sarcophagus is entirely submerged.

This is an intense and disturbing scene, which lends urgency to the player’s efforts to exonerate Espella. In keeping with the logic of witch trials (and, to be fair, as is consistent with the Perry Mason trope of the defense lawyer as protagonist), it is not possible to simply prove through logic or burden of proof that Espella is not guilty. Labyrinthia is a world in which magic provides an explanation for the inexplicable, and the demand of the law is that the guilty party must be found and punished. Within these strictures, a woman accused of witchcraft can only be cleared if the true guilty party is discovered. As a result, while Phoenix Wright ostensibly serves as a counsel for the defense, the player in effect acts as a prosecutor, identifying and convicting the true witch in the room, watching her burn while Wright protests that this isn’t what he wanted, he didn’t have any other choice. And then doing it again.

It’s not unlike reading The Crucible from the other side, convinced all along that John Proctor and the others got what they deserved, punished for their ample sins regardless of whether witchcraft was among them. It is to declare that there cannot be an accusation without a guilty party, that every misdirected accusation is the result of conspiracy or mendacity, but not on the part of the system of authority.

All of this is exacerbated by the fashion in which magic and witchcraft are gendered within the game. It is a declared fact of Labyrinthian magical lore that only women can be witches, and it is revealed through testimony that being a witch is a condition of birth (not choice or training), of which one becomes aware in early childhood. Even so, witchcraft is described as evil, and when even a sympathetic character describes the performance of a magic act, she states that “at that moment I felt an evil presence awaken within me.”

It is a minor spoiler to reveal that one trial requires Wright to reveal that a character who has so far been presented as a man is in fact a woman. This action in any circumstances is a violation, but in the context of a Labyrinthian witch trial, where the character’s life as a man is depicted as a lie and treated in effect as well as in the words of the townspeople viewing the trial as evidence of the character deserving the fire, it is absolutely horrifying. Labyrinthia is a fantasy world, but the fact that there is no space within Labyrinthia to recognize this character as transgender instead of a woman pretending to be a man (likely for malicious purposes) is an indictment of too many of our fantasy worlds.

That there is no space to recognize this character as transgender is an indictment of too many of our fantasy worlds.

In the end, the game attempts to pull back the curtain with a certain amount of Scooby-Doo. The villain is unmasked, and things, as might be expected, turn out to not be exactly as they appeared. Puzzles are solved, lessons are learned, and nearly everyone gets a happy ending. This is a fantasy, after all. The problems that remain are problems of history and lack of recognition.

In 1431, a 19-year-old woman named Jeanne who had lead a successful campaign against the English at Orleans was burned at the stake as a witch. It is common knowledge that Joan of Arc was a mystic, who claimed to hear divine voices, and whose victories in battle marked an almost supernatural turn in fortune between the English and the French. It is less widely known that the most significant evidence held against Joan, the sign of her heresy and witchcraft, was that she wore men’s clothing and kept her hair cut short.