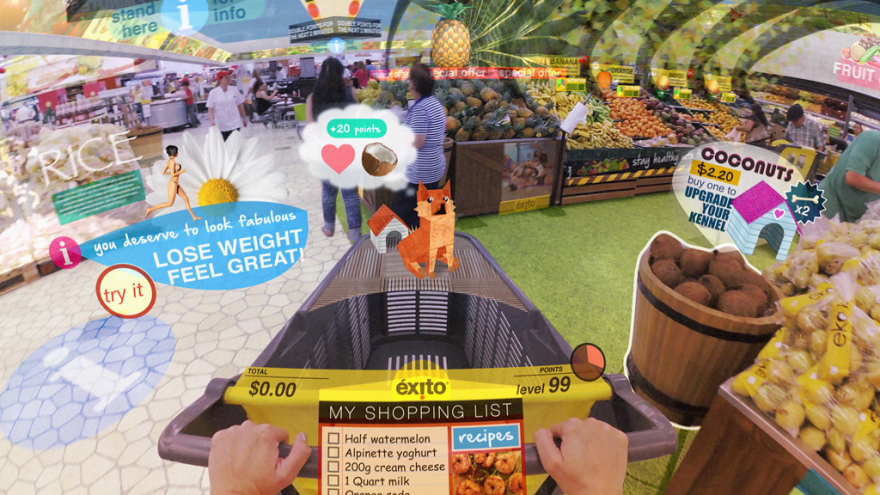 Augmented Reality (AR) is the mixing of the world as we know it with the digital world. Fittingly, it has long blended with videogames. In the popular rhythm game series Hatsune Miku: Project DIVA, if playing on a PlayStation Vita, the player can enable an AR Mode and carefully orchestrate where Miku and her Vocaloid pals are placed in the “real world.” But know this: Miku is not a person. She’s a purely digital pop star, and even plays live concerts as a projected hologram—what some might call the ultimate AR experience.

Alongside some odds and ends in miscellaneous Nintendo 3DS games, AR has felt more like a complement to technology and life as we know it, rather than integrating the two seamlessly. But in designer and filmmaker Keiichi Matsuda’s Kickstarter-funded short film Hyper-Reality, life itself is a game.

Matsuda’s long experimented with the wishy-washy premise of AR under his blanket series “Augmented (hyper)Reality.” Six years ago, Matsuda first embarked on this journey with two short films: Domestic Robocop and Augmented City 3D, two After-Effects laden videos showing the more questionable side of AR’s potential. It’s an AR-embodied future that obscures literally everything we see through our own eyes with digital candy.

In 2013, Matsuda launched a Kickstarter campaign for the cherry on top of the “Augmented (hyper)Reality” cake: Hyper-Reality, a Colombia-based short film about a middle-class AR user, and the dangers she faces when hacked by an unknown user. Recently, the short film was finally released to the public (following screenings and crowdfunding backers getting the opportunity to watch it first, of course). In Hyper-Reality, the digital and physical worlds have merged into a singular kaleidoscopic technicolored vision of reality, so much so that the brief shattering of the AR-induced world is incredibly jarring for the dependent user.

Hyper-Reality is our worst nightmares about AR fully realized

Hyper-Reality is a fever dream. It’s our worst nightmares about AR (and even, to another extent, virtual reality) fully realized. A future in which seedy advertisements plague our every vision within an AR “freemium” software. A future in which even the most mundane tasks in our daily lives are gamified by ever-accumulating points and prizes. Even points are often necessary to progress through even the most essential errands, such as grocery shopping. Taking on religion in a time of crises is celebrated through a pop-up “Level Up” banner, as if the film’s protagonist hadn’t just been robbed of her very identity via a hacker moments before. Matsuda’s AR-future is truly a terrifying one, but boy, it sure is pretty to look at.

You can watch Matsuda’s Hyper-Reality below, and read more about the project here.