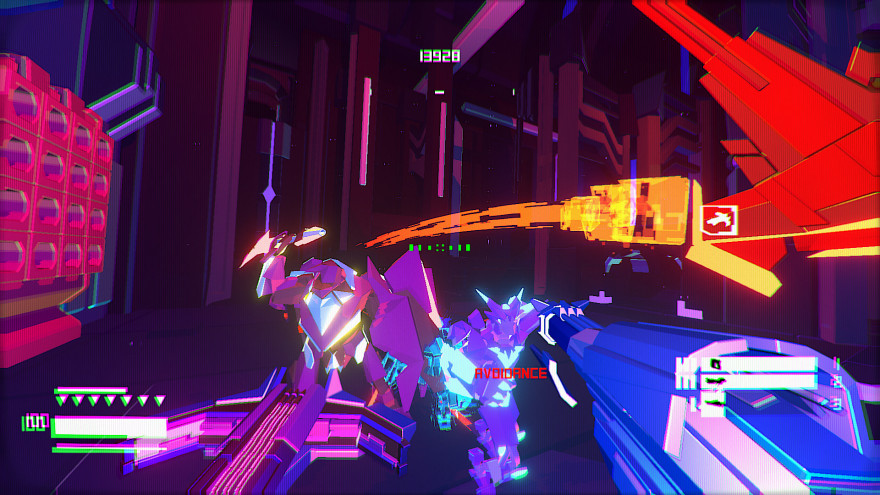 Beginning in the 20th century, modern design started being dominated by the saying “form follows function.” The idea was that when creating a building, car, or piece of software, pragmatism should come first, and style should be secondary. In Adult Swim’s upcoming game DESYNC, however, style is the function.

Taking inspiration from classic shooters like Quake (1996) and Unreal Tournament (1999), DESYNC is a deliberately unrealistic shooter set in a colorful neon world resembling the computer reality of the Tron films. Enemies are abstract collections of polygons and vectors, and players dual-wield guns and swords while jumping dozens of feet into the air and sprinting faster than Usain Bolt. This is all set to a dope electronic soundtrack, and the result is a Daft Punk-inspired fever dream that looks like a scene kid’s Christmas list. Most interesting, however, is how the game hopes to utilize this sensory overload to teach its players how to shoot good.


“A linchpin of all of Desync‘s design is creating synesthesia,” write the game’s developers in a recent entry over on their devlog. “This is most clearly reflected in the art-style.” They explain that because Desync is built to support a wide number of playstyles, it has an “overabundance of mechanics.” However, with its simple, clean world, the developers hope to help introduce players to its complexity not through plain text or extended tutorials, but through “a-ha moments” discovered naturally during play. “Desync has been built upon the idea of supplying simplicity/minimalism inside a shell of complexity,” they explain. “We’ve wanted everything in Desync to be somewhat abstract, hidden behind a layer of understanding that can only come through interacting with and even caring about the game’s systems.”

“A linchpin of all of Desync‘s design is creating synesthesia”

For instance, attacks in the games aren’t described using full sentences, instead simply listing the guns, enemy types, and traps involved to give players a clue as to what to do. Then, when they puzzle out how to make the attack work, the hope is that it will stick with them better than if the game had simply told them outright. “We only begrudgingly use human language at all,” write the developers. “Had the game been simpler, we’d create an alien language of glyphs, animations and icons to describe actions in the game,” similar to the recently released Hyper Light Drifter.

The result is a game that harkens back to the ‘80s, not just in its kitschy retro-VR look, but in its insistence that players just figure it out. As games have moved into 3D and become more complicated, tutorials and extended text teaching players how to play the game have only become more prevalent. This can be seen in the boot camp sessions at the beginning of many Call of Duty games, or in how the opening hours of Zelda games tend to be spent in a closed-off safe zone getting accustomed to how to play. With a touch of style and a good push out of the nest, though, DESYNC argues that even with all their complexity, modern games aren’t that much harder to understand than racing a light cycle in an ‘80s arcade cabinet.

DeSync is scheduled to release sometime in 2016. You can keep up with its development over on its devlog.