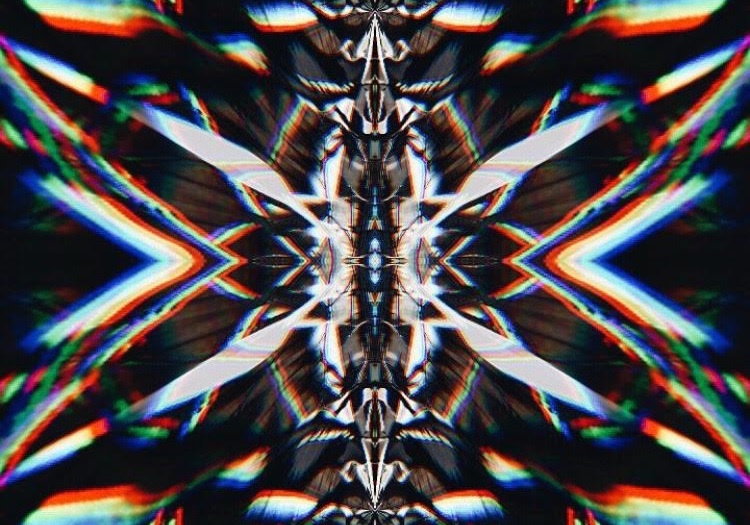 Allan Lavell has broken the fulcrum that holds reality together. Last year he gave us a way to turn any media or camera feed into glitched-out gifs—glitch art as easy as applying Instagram filters. He called it Glitch Wizard. But that was last year. Lavell has moved on since then. Get with the times, people. It’s all about Hyperspektiv now: his newly released “modern kaleidoscope” for iPhone. It’s fucking wild.

If Glitch Wizard was a way to distort reality then Hyperspektiv lets you leave it behind entirely. It has a range of FX for you to inject into your phone’s camera feed, turning landscapes into hypersurfaces of bleeding color and beautiful corruption. You essentially become a VJ—a video-based DJ—playing with an art tool straight out of William Gibson cyberpunk (one of the effects is even called “NEUROMANCER”). Where shit really begins to make your head spin (in the best way possible) is fine-tuning your selected FX, adding mirrors to multiply patterns, glitch edges, increasing gamma, warping the 2D image into a 3D shape. You can easily get carried away.

And it seems many people are. Since its arrival, Hyperspektiv has been used by a beatboxer who uses touch macro to turn his mouth-sounds into FX triggers. Fashion photographer Chris Shintani also captured model Carmella Rose using Hyperspektiv’s dimension filter. Panoramical creator Fernando Ramallo also played around with it, inviting us inside his entrails. Then there’s electronic musician Richard Devine, who has been making tiny looping music videos that explore the more abstract possibilities with the app.

In fact, it seems that Hyperspektiv has proven particularly popular among DJs and electronic musicians. And that comes as little surprise given that Lavell made Hyperspektiv in collaboration with Boreta and Grenier from the three-piece electronic music group The Glitch Mob. How this happened can be easily traced from Lavell’s work on Glitch Wizard. While looking to increase the outreach of Glitch Wizard (this was before it was released), Lavell noticed The Glitch Mob through the Glitché website, deciding to take their tour photo, run it through Glitch Wizard, and tweet it them. This was the result:

Turns out that The Glitch Mob loved what Lavell had done and so began a series of conversations with Boreta in particular. But it wasn’t until they met up at Game Developers Conference 2015 that they decided to ignite a collaboration on something fresh. Skip forward some months and Hyperspektiv was born.

Lavell says that what he wants people to do with Hyperspektiv, most of all, is to experiment. “Push the boundaries,” he says. “Both in what you shoot and how you shoot it.” After the beta testing produced some surprising results, Lavell knew he wouldn’t want to miss out on what people were doing with Hyperspektiv, hence he encourages people to use the #hyperspektiv tag to showcase their creations. It’s all over Twitter and Instagram, supplying a feed of mesmerizing images and short videos for you to get lost in.

Lavell also teased that Hyperspektiv is only the beginning. “The version of Hyperspektiv that we are releasing to consumers at this time is a distilled version of an even more powerful tool,” he says. “We’ve kept this internal for now —it was used to create the effects that you find in Hyperspektiv. Some of our beta testers have already felt out some of the feature set of this more powerful entity, and asked for them in their feedback.”

You can purchase Hyperspektiv for iPhone over on the App Store.