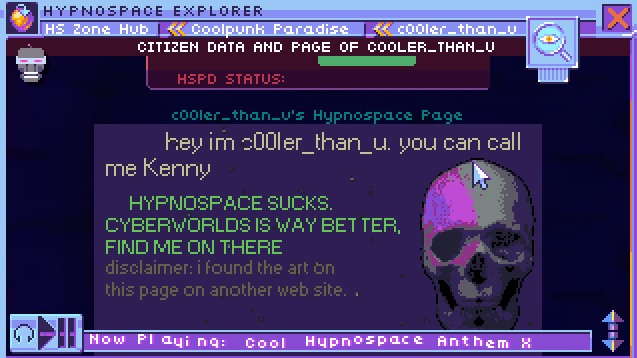 Scumbags on the internet causing trouble again? Dropsy (2015) creator Jay Tholen knows who to call—The Hypnospace Enforcers! Hypnospace Outlaw takes players to the literal information superhighway as internet defenders. “In said future, most people work for a powerful corporatocracy all day, and cruise the Hypnospace Highway while sleeping,” Tholen said. “There are competing virtual sleep worlds, but Hypnospace reigns supreme.”

In Hypnospace Outlaw, players are moderators of the Geocities-like future internet. They’re the Hypnospace Enforcers. Much of the design focuses on browsing a series of Hypnospace websites—dancing sprites and flashing text abound—and learning about the folks who inhabit the space. Identifying troublemakers is the main idea; early in the development, Tholen’s identified the Coolpunks as a particular problem. A bunch of “dumb kids” are trying to stage a mass migration to a Hypnospace competitor, and while that’s not technically illegal, talking smack about Hypnospace is.

The rules of Hypnospace shift with internet trends—so while talking shit on the provider will likely always be illegal, there’ll be a fine line for when using certain memes, past their prime, will become a chargeable offense. So what do defenders do when they’ve noticed someone breaking the rules? Hop into their digital cruisers and take those suckers down!

Each internet person has a vehicle that represents them on the literal information superhighway. “After you find a violator, you can track them down there and use a Ghostbusters-esque lasso mechanic to apprehend them,” Tholen said. Some vehicles are dangerous, though; players can be infected by adware and viruses on contact. Hackers and rogue AI will serve as “quasi-boss battles,” Tholen added.

There will be a lot to do in Hypnospace Outlaw, but it’s still mostly about the people for Tholen. “It’s similar to what I wanted to say with Dropsy in that it tries to emphasize the unique value of each person in spite of how other people may rank or filter them,” he said.

Hypnospace Outlaw doesn’t have a release date just yet, but it does have its very own website.