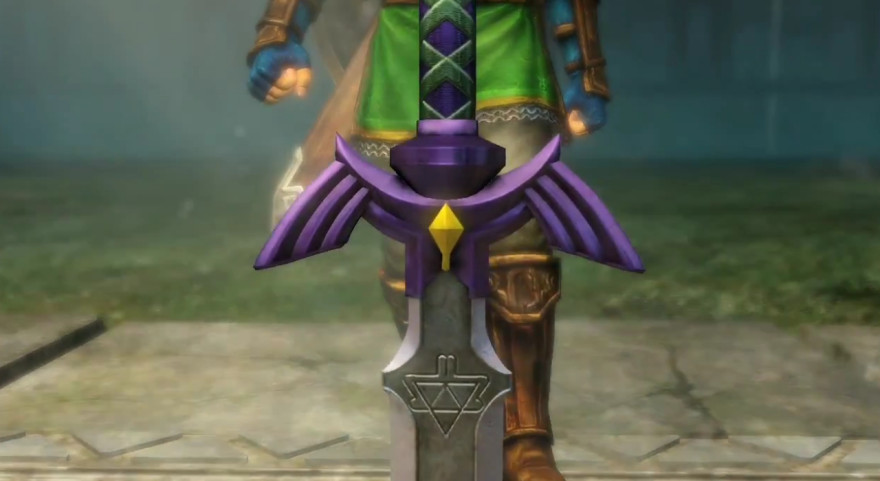 The Zelda franchise has seldom explored other genres beyond its own, eponymous style of adventure and puzzle-solving. Link’s Crossbow Training for Wii was a shooting gallery with clay pigeons masquerading as familiar enemies; it was also a clever enticement to purchase a plastic add-on to stick onto your Wii remote. 2007 seems so very long ago. But mostly each Legend of Zelda game is a smart variation on a formula comprising vast interconnecting regions to explore, dungeons-cum-riddles to solve using specific items, and a dose of pathos as you, the chosen one, sacrifice your life for the freedom of your people.

The kind of experience unique to a Zelda game has been honed over decades, like a sword etched from diamonds. Hyrule Warriors, made by subsidiaries of Koei Tecmo with Nintendo’s oversight, dulls that sharpness down to a fat stick, with which you might swing and hit hundreds of minions at once.

Link was never before about mass destruction. In fact, he never had to be “Link,” at all—each past Zelda title lets you name your character what you wish. Not so in Hyrule Warriors. These are characters to control, not avatars to embody. We can finally watch from a distance. But not everyone will like what they see.

Other cultural heroes are born and reborn for certain purposes. Batman in the 60s, with Adam West swatting at candy-colored actors while cartoon bubbles burst along the edge of your television, is not the same Batman as Christian Bale murmuring on the face of a sixty-foot IMAX screen. Yet they’re both Batman. Koei Tecmo and Nintendo have taken esteemed characters from a single, if malleable, universe, and thrown them into a different context altogether: That of the Warriors series, known in Japan as Musuo, where historical figures wage war across huge battlefields in melee combat. Your character somehow takes down scores of enemies at once. Ancient strategies written about in Sun Tzu’s The Art of War are simplified down into whose broad sword is biggest. This is not the Legend of Zelda we remember.

But that doesn’t stop Nintendo from reminding us. Aside from the standard story mode, there is a secondary playstyle called “Adventure Mode.” Choose this mode and the Title Screen reappears, this time with 8-bit music playing. A text screen follows, its story framed by pixelated foliage and lit torches. In fact, the entire map of this mode is taken from the overworld map in The Legend of Zelda for NES. Each overhead screen from the NES game becomes a square on a grid, and each holds a different task. Press start and the challenge plays out as the normal game But the window dressing is from 1986. Old-school items like candles or bombs can be earned. A mandatory update of the game even includes a bonus weapon: A giant Master sword, resized and painted to resemble the 8-bit original.

The loading screen for the entire game is NES Link fighting that projectile-spitting nuisance, Octorok. Once its spitted stone repels off your shield and loading completes, Link holds up the 8-bit Triforce. What was once an end-of-game climax is now a screensaver repeated every twenty minutes. Perhaps there is such a thing as too much nostalgia. What happens to old heroes when we lionize their past achievements ad nauseum?

This is why memorials to history are so often cold statues: An implicit acknowledgement of the past as frozen in time. Meanwhile, the bustling metropolis hurries by, walking by the poured concrete with nary a glance. Some stop to rub a boot or shoulder for luck. The bronze wears off over time, leaving a bare patch where those hands touch most frequently. The advantage of tangible memorials is also a disadvantage: What allows us to remember can also be worn away. Hyrule Warriors isn’t so much a living monument to the Zelda franchise as it is an incessant series of winks. After a while the gesture looks more like a tic.

There’s your typical story about a good-hearted entity soured by desire and darkness, somehow opening a portal in time that convenientally allows enemies from other Zelda games to mingle here. It’s your job to save Hyrule one more time.

Imagine a self-filling pinata. Imagine a hundred of them. Imagine them lumbering at you, wielding swords.

The point of the game is to slay hordes of monsters over and again. As you progress, the spectacle grows. Playing Hyrule Warriors feels like indulging in a birthday party gag gone on too long. This is action game-as-pinata. Hit things long enough and a hundred shiny objects spill forth. There is a hierarchy of opponents: Grunts, Keep Bosses, Messengers, Commanders, and more. Grunts, when defeated, just fade to grayscale and poof into nothing. Strike the fatal blow to a stronger enemy and they erupt in a shower of rupees and potion bottles and hearts. There is little effort taken to obscure the videogame machinations at work; more enemies spawn in front of you, ghosts turning corporeal.

Typical Zelda games succeed by layering complexities over one another at a gradual pace, so that the game at Hour 30 is almost nothing like the game at Hour 1. Hyrule Warriors is more of a straightforward slog. You’ll find bigger weapons and learn new combos (the execution of which is an additional button press, e.g. B-B-B versus B-B-B-B) but the way you play and your moment-to-moment goals remain similar throughout.

So I’m surprised when, by Hour 5, I’m feeling increasingly enamored. I expected boredom. But then I upgraded my Fire Rod and lay waste to dozens of skeletons with swirling columns of flame. A lumbering dinosaur creature swallows my bombs and lies down, exhausted with indigestion, a modern-day retake of that very first encounter with this same creature, named King Dodongo, in the NES original. I pummel on the rough mesozoic skin. The finishing blow zooms in for a slow-motion point of impact and a million rupees explode from this now-withering corpse. This is a good feeling. I come to want this feeling again and again.

A pinata is usually cracked open once and emptied. Imagine a self-filling pinata. Imagine a hundred of them. Imagine them lumbering at you, wielding swords. Imagine the satisfaction of perpetual release, these incessant explosions of constructed glory.

Pay too much attention and the power fantasy fades. I stand still amidst a battleground full of ax-holding goblins. They come up to me, moths to my flame, hovering. Occasionally one swings an ax. He misses. It takes twenty seconds for one to land an attack. I tap B-B-B-Y and destroy thirty with ease.

You also fight alongside other soldiers for Hyrule. Some are fellow Zelda franchise characters like Impa from Skyward Sword or Shiek from Ocarina of Time. You eventually get to play as them, each with new moves and powers, each with the same post-victory pose that plays after every hard fought battle, as if this were a magazine shoot and not a fight for a nation’s survival.

But most of this army are nameless armored knights. Capture a stronghold and hundreds will fall back to secure your position. These warriors are another illusion. Gathered shoulder to shoulder within the castle’s walls, they heave as one, two dozen bodies breathing in syncopation. I lose a battle and curse out-loud, blaming my defeat on their communal lamaze. This is not Medieval War Simulator. This is setting up all of your action figures on the carpet and knocking them over with a broomstick.

If you hold certain made-up heroes in higher regard than others, you may blanch at seeing them debased like this. But these heroes, like all others, are just toys in a bin. Play with them as you will.