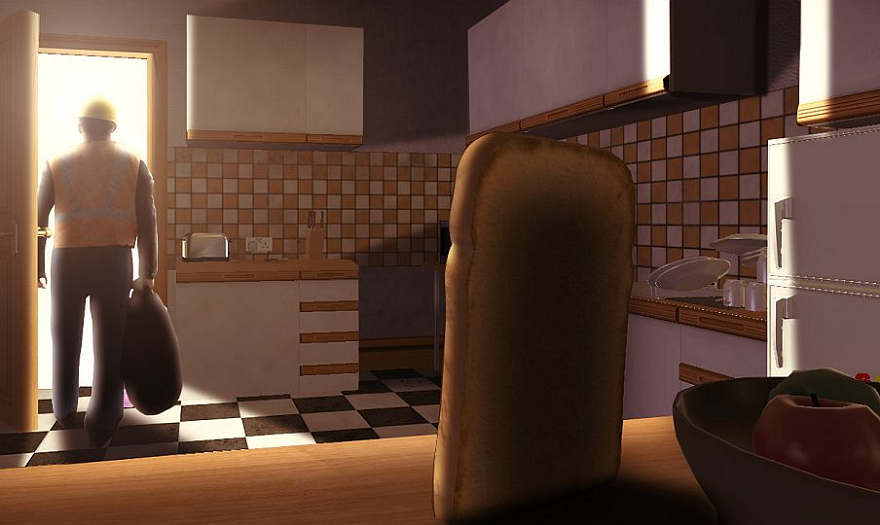 Title:
I am Bread

I awaken. I am Bread. I am a slice of bread, wedged in between the bulk of the loaf and that weird end piece your dad eats. I am determined to become toast, find a heat source so as to roast my buns and become a part of this balanced breakfast. I am Luxo Jr., the animated and curious Pixar office lamp that makes something you buy from Staples—an empathic character through its motion. I am that—I don’t know—goat, from Goat Simulator, bringer of destruction and schadenfreude. I am bread, and I am terrible at being bread.

Between me and the toaster is a kitchen. It isn’t full of deathtraps but it does have dirt, ants, dust. It has things that make me unappetizing. Glass somehow isn’t one of those things. I break a jar of strawberry jam open, and upon latching on to one of the shards, the kinetic energy of the game’s rubber-band physics launched me straight through the air, across the room, netting me an achievement and landing me into a litter box.

This was the most entertaining of my attempts. Your little slice of life has many limitations. You can only grapple your way around, like the squiddly-doos of Octodad and Mount Your Friends, but you also have limited grip. The floors and walls between you and that toaster feel bigger and more despicable and much dirtier.

Perfect timing, because I could no longer give a shit

I am Bread is hoping for the best of a couple worlds, tough and silly, white and whole wheat, rye and ciabatta. It wants to be a dope like its peers Amazing Frog, Octodad and Goat Simulator, giving you a playground of nonsense toys to break. The story revolves around accidentally driving the owner of the home to seek therapy. It also wants to be a daunting challenge, something daring to be sped-run. It hits that blend, but not without admitting to its mistakes instead of fixing them.

The dirtiness damage ramps up quickly; for an edible without a brain, you are asked to think fast. Your grip meter isn’t much more generous, making wall climbing feel not only routine but something you’d rather skip having to do. And there are a lot of walls to scale. The tough-love relationship between your movement and the camera angle helps no one’s patience. After failing to make my way to a toaster multiple times, a magical jar of marmalade appeared to cut me a break, it granted me invincibility and infinite grip. Perfect timing, because I could no longer give a shit.

I coated myself in a layer of grime, fish bones, egg shells and live bugs. I romped around in filth and smashed glass while skipping. I wanted to be the bug juice at summer camp, spat in and salted to see if the teen counselor would prove to be a chump. I returned to the litter box and sat in that thing like it was a Jacuzzi. I picked up a knife, and even if it meant sacrificing one of my little grippin’ hands, it was worth it. I wanted whoever was going to eat me to find me like that, ant-flavoured and ready to cut the bullshit.

The game gave me an E rating for the level. This is how I played most of the game. Trying. Failing. Lowered an escape rope from above and proceeding to crash the helicopter on purpose. Mysterious owner, I am going to smash all of the beer bottles on your nightstand. I am going to dump this bowling ball on your television set. I am the worst slice of bread you’ll ever meet. I am terrible.

There are other endearing modes: free roam, a destruction based one, Bagel Race. The story mode, where time, skill and cleanliness are all factors feel too tightly wound around a Madball. If something had given, something made a little more lax, then it would have felt more balanced. Instead it feels like an initial lurch, and something to return to for the bold or failed at again. Not the starting point.