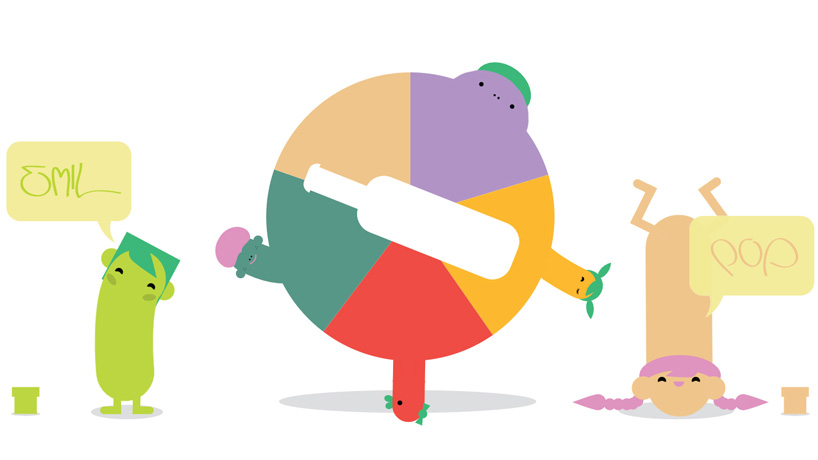 The first instruction tells you to do the unthinkable: Turn off your TV. What voodoo is this? But fret not. The Wii U GamePad’s 6.2” screen is all you’ll need, plus a few Wii Remotes lying around (and perhaps a frosty beverage). This is because the folks at KnapNok Games, developers of experimental games out of Copenhagen, wisely anchored their party-starter not around the glowing monolith hanging on the wall but around that which makes a party in the first place: The people. Now I just needed to find some.

The game only borrows the title from the kissing-game of your youth; here, you sit around the GamePad like you would a boardgame, using Wii Remotes and physical proximity to accomplish goofy goals (one challenge’s title: Squeezing the Orange). KnapNok has replaced button-pressing challenges with physical ones before—their game B.U.T.T.O.N. frequently devolves into all-out wrestling matches. Spin the Bottle is the next cannon-shot fired in their battle for local multiplayer, showing the world that human contact trumps long-distance headshots.

Before roping in an accomplice, I first tried playing Spin the Bottle: Bumpie’s Party by myself. Friends were out of town. A deadline loomed. Turns out a gathering of one is not really a party at all. (My middle-school aged invitations to a “party in my pants” notwithstanding.)

KnapNok has replaced button-pressing challenges with physical ones

But I wanted to test the games out a bit before a full-scale Bumpie-a-thon. I needed to know what to expect, to be a confident bottle-spinning Master of Ceremonies. So I asked my wife to enact an old dream deferred and play together, in an evening of What Might Have Been had we grown up in the same town and hung out in the same dimly lit basement while the parents slept.

She did not wish to play with me. Our marriage was barely a year old and already the bottle has ceased to spin.

So I took to the backwater of unsatisfied spouses everywhere: Craigslist. When I posted a message on the online classifieds website, inviting strangers to play Spin the Bottle, I was unsure where to place it. “Activity Partners” sounded germane, but implied an undesirable one-on-one intimacy. “Making Connections” felt too permanent; this was to be a short-term arrangement. Perhaps the “Etc.” category under Part-time Gigs? But no money was being offered. I took a chance and left the following message in Activity Partners, fingers-crossed:

Two adventurous souls replied. Bob wrote: “does your wife want to play too?” Mitch was more enthusiastic, saying, “This game sounds exciting haha.” But the lack of punctuation and proper capitalization put me off. Better judgement prevailed. I was not about to let strangers into my home for the sake of objective games criticism. (Plus my editor forbade me; we didn’t have the insurance to back up a worst-case scenario, i.e., burglary / mutilation, etc.) I was on my own.

I was also running out of time. My 13-year-old self would not have had this problem. To whisper “spin the bottle” around hormonally-charged teens is to sing the Siren’s song to land-starved sailors. They will be there. Amongst thirty-somethings, the phrase has less pull. I had to do something drastic. So I brought the Bottle to the Spinners. I packed up my Wii U and its controller, threw a few Wii Remotes in a totebag, and descended upon a casual gathering of friends, none the wiser to my plot.

Two hours into our laid-back Friday night, and as many bottles of Harpoon Ale, I asked the pivotal question: “Who wants to play Spin the Bottle with me?” Soon, the GamePad was on the coffee table in front us, a Wii Remote in each of our hands. Jason, Michael and Roman were ready to go.

You begin by spinning the titular object represented on the Wii U GamePad, now tri-sected by the other players’ names. Wherever it lands determines your partner for the next round. Then a giant arm descends, plucking one of sixteen game titles from a hat. (This number will grow over time; KnapNok has said they plan to add more games through DLC.) If you succeed, each player gets a flower. First person to three flowers wins.

The competition was, well, fierce isn’t the word. Understanding of our fate grew, though, and soon a halting acceptance turned to some kind of personal investment. Michael, a biomechanical engineer, spun first; the bottle pointed toward my in-game character, a human-like tube. Soon we were facing each other, opponents in a round of “Invisible Beach Tennis.” One thwacks their Wii Remote in the air, serving the ball. The other listens as the ball descends toward them, then swings to return the shot. You work together to string ten shots total before a counter counts down. (In an email, Dajana from Knapnok encouraged me to raise the difficulty, but we were not yet ready.) Michael and I swung our Remotes, the two onlookers following the invisible ball in the air between us. Victory. One flower each.

The next few games grew in euphemistic glory. Jason the Vegan and Roman the Lighting Expert played “Pump the Trolley.” Jason and I attempted to “Hide the Monkey.” Lucky for us, Roman’s and my wife were otherwise engaged for the evening and Jason’s girlfriend was in another city. When the hens are away, indeed.

The competition was, well, fierce isn’t the word.

I had two flowers now; one more and I was the winner. Devious choices began to be made. The next game was “Blind Dog.” I was instructed by the game to kneel on all fours, a blindfold covering my eyes. Michael was to sit on the floor in front of me. A Wii Remote, called a “bone,” was to be placed behind him; my objective was to grab the bone by listening to Michael’s verbal cues.

I closed my eyes (we were an honorable bunch) and scuttled forward to my partner’s halting orders. Ten quick seconds passed. My dog had found no bone. I opened my eyes to see that the Remote had been placed across the room, behind a chair, possibly under a box. I was set up. The game continued.

Roman spun and his bottle landed once more on Jason. Their challenge? “Slow Dance.” Each held their Remote behind the back of the other, in effect cradling another’s warm torso, stomach to stomach. The Remotes had to keep moving at a steady, even pace; Roman’s star tattoos glistened from the overhead fluorescent lights as he swayed, keeping time with Jason’s uncertain steps. Michael and I sat, content to watch instead of providing any obstacle to their embrace.

The timer counted down to zero and from the GamePad’s speakers came applause and the cheering of strange cartoon creatures in the shape of sausage. Roman had grown his third flower. He was the victor on this day. But as we shook hands, giggles still escaping our grown men lips, I daresay we four all left that living room as champions. Then we returned with a fresh cold beverage in hand and laughed some more.