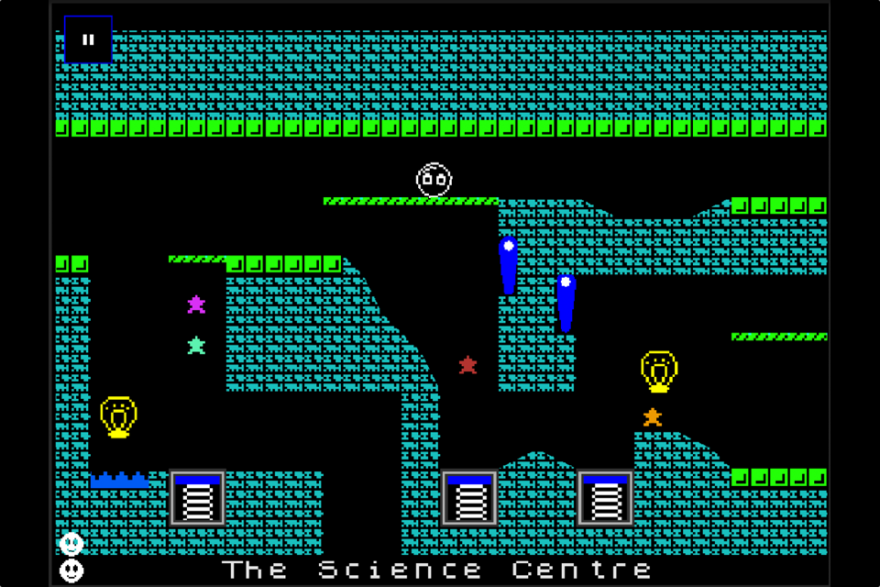 Title:
I Am Level

The first thing I notice about I Am Level is the way it looks. By this I mean that it looks like a poorly made NES game, all monochromatic characters, brazen color scheme, repeating four-­frame animations and solid black backgrounds. It looks, in short, a bit shitty.

Is that a fly or a bat, a kettle being poured out or a fish vomiting?

It does, however, look shitty in a very coherent and purposeful way, so I started to suspect that something more was afoot. Research revealed that it this in fact a very specific kind of shitty. Specifically, I Am Level is an homage to the ZX Spectrum, a pre­-NES videogame console that was almost exclusively sold in the UK, and in particular it’s an homage to the 1983 game Manic Miner (a game that, truly, looks a bit shitty). As in I am Level, every wall has a repeating, eye­strain-inducing pattern, and you can have great fun trying to figure what each monochromatic 10×10 chunk of pixels is meant to represent. Is that a fly or a bat, a kettle being poured out or a fish vomiting? It’s a lovingly authored sort of shitty.

You inhabit this world as a ball, and you navigate it by rotating your phone, which makes your ball start rolling to that side, as if the game-world was a physical object. Your other input is tapping the screen, which activates all of the many flippers, pistons and trap doors that populate the world. Thus you proceed, tipping your phone to align the ball to a jump pad and tapping the screen to make it—the ball—fly.

What this creates, then, is a game that looks like a platformer but feels and moves like pinball. You’ll spend your time waiting for the perfect angle to fire the ball, maintaining momentum, mastering an exact sequence of taps to send the ball precisely where you want it.

It gives the game an elegant rhythm—roll in, tap the screen, observe, form a plan, execute, roll out.

The tap-anywhere-to-activate-everything–system also works great as a planning tool, and I found myself stopping every time I entered a new level to quickly tap the screen and watch every moving part jump into action. It gives the game an elegant rhythm—roll in, tap the screen, observe, form a plan, execute, roll out. The rooms are connected, though, and when you start to backtrack through these levels to visit newly unlocked areas you get to feel the rush of mastery, soaring from screen to screen without ever losing momentum.

This, I am here to tell you, is an amazing feeling. It creates a sensation not rarely felt: something like setting a high score on an arcade cabinet in a dirty bar in the early 80s. So it’s strange when reality and inconsistencies creep in. The ball itself, you notice at some point, rotates a little too smoothly in the midst of all the low­-resolution ZX Spectrum aesthetic. The physics aren’t quite cohesive; there is no mid­air control, and, apart from the ball, nothing is affected by the rotation of the phone. Occasionally, crisp, high-­resolution effects burst out of the screen, completely out of place amidst all the garish blocks. This is the wrong kind of shitty.

There are dry Briticisms showered throughout: in “The Tea Rooms” flying teapots protect glowing little cups; a level populated by eternally pumping red syringes shouts “We Love the NHS!” in celebration of socialized health care; one particularly irritating owl is named “Doctor Hoo.” This helps solidify the tone of the game as that of an aging British gamer. But then there’s the layer of stuff that seems motivated by youthful enthusiasm and stupidity—pixelated interface elements that scale awkwardly; countless tallying of places you discovered and skins you unlocked every time you die; the trite, too-modern loading screens. It’s all a bit like a Skrillex drop in the middle of a Sex Pistols song. The great things are still great, though, and it all ends up being a matter of your tolerance of shit.