At this year’s No Quarter exhibition at NYU, amongst the flashier digital entries, Zach Gage debuted one of the strangest card games I’d ever seen. Titled Guts of Glory, it was turn-based eat em’ up that has you channeling the carnal powers of appetite to outconsume your opponents. At the time, it was just a prototype, but we’re happy to learn that Gage, who we interviewed last month at the Lincoln Center, has taken the game to Kickstarter for full-production. What wonders await the hungry?

The gameplay is simple:

In Guts of Glory, you compete to be the greatest eater in the world— not that there’s much competition (or world), but what’s left is fierce.

You start with an empty mouth and a full plate of delicious comestibles. Each turn, you must cram a new delicacy into your mouth. Then, you must chew (always chew your food!), swallowing anything that’s been masticated into submission. Some cards give you glory, bringing you closer to victory, while others bolster your abilities or wreak havoc on an opponent’s mouth. But beware! If you need to feed but have no room in your mouth, you’ll have to spew one of your precious cards at another competitor, along with the chance for extra glory.

One notable aside — the artwork. Gage is working with Jess Worby, a talented visual artist. The art direction decision is smart one. We love board games at Kill Screen, but more often than not, the style is severely lacking even if the mechanics are tight. This is common mistake with game designers — an over-appreciation for the mechanics without a mind for how the damn things look. Of course, what’s ultimately important is the blend of two, but Gage’s interest as a former artist and his knack for creating elegant systems is in full-form with Guts of Glory. 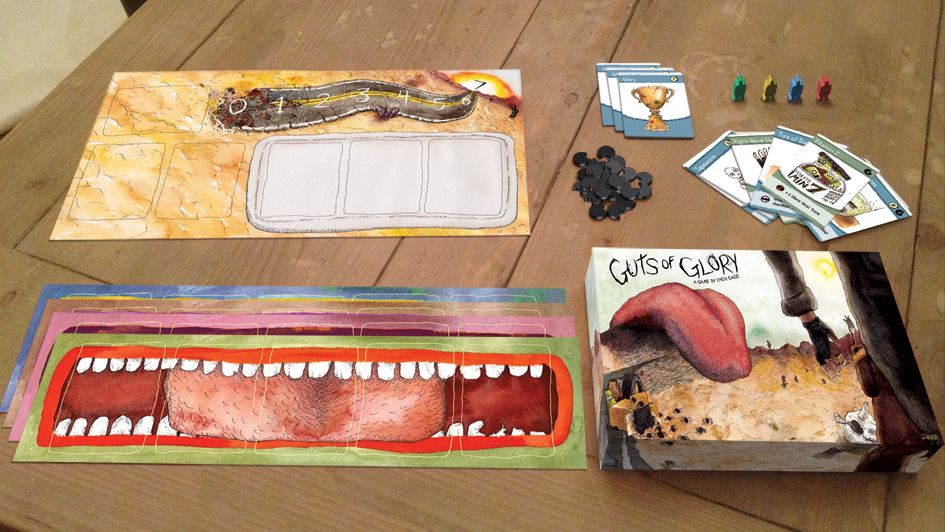