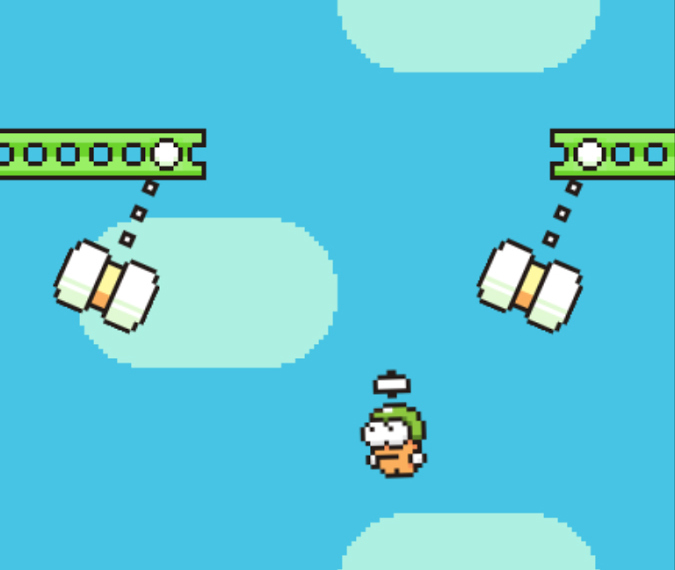 I thought I was ready for the ghost towns of Detroit. I recently visited the city for the first time, and, catching a taxi from the airport, I looked for signs of what I’d heard on the news since the collapse. We hit the outskirts, and I saw row after row of abandoned homes, desolate neighborhoods of low-income housing with views of the freeway, their windows all boarded up. Such widespread economic fallout is eerie. After awhile, I needed to look somewhere else, so I fired up Swing Copters, the new game from the designer of the fraught megahit Flappy Bird.

Games have always been a fruitful avenue for centering myself. A good game can change the channel when I’ve lost the remote. Swing Copters—with its simple premise and promise of challenge—might be able to hit the reset button, I thought.

But after just a few minutes, I was looking back out of the window. I play games for many different reasons, but in the most base interaction, I simply want a screen to distract me from reality. Games are reciprocal, and interaction with them codifies my thinking. Suddenly, I’m not focusing on external issues, and I’m able to re-enter reality without the baggage of my former disposition. But Swing Copters is a game of deliberate desolation. It posits an empty world, like the buildings I drove past in Detroit. The framework is familiar, but the lifelessness is disheartening. Detroit, of course, is more than just these buildings; it’s a place full of people and life and culture, beyond the facades and the popular narratives about it. But you could play Swing Copters for a decade and it would still be in a ghost town. It’s all the same. The first sad structure endlessly repeats.

Don’t get me wrong. Repetitive games can be brilliant. But repetition needs to be peppered with dynamism. Patterns change in Super Hexagon, levels get faster. So too does Tetris leverage speed and difficulty to build upon its initial premise. But in Swing Copters, there’s no such shift in design. Just you slowly slogging upwards towards infinitum. Play the game as long as you want, its not going to get any better.

It is an exercise built for monotony.

Back home, I decided to give the game another chance. I wanted to play it from a different state of mind. I played it for an hour, and got a high score of 30, unlocking avatar outfits that changed nothing about the game. I was awarded a bronze, silver and gold medal for my time. The fact that the game festoons the player with needless adornments speaks to the game’s knowing manipulation of false pretense, an unkeepable promise of reward for playing. I dislike this game not because it is hard or difficult to play, but because it isn’t even trying. It is an exercise built for monotony, and a high score is nothing more than a testament of your ability to endure the mundane. It’s a game built in a bankrupt world—depressed, and depressing.