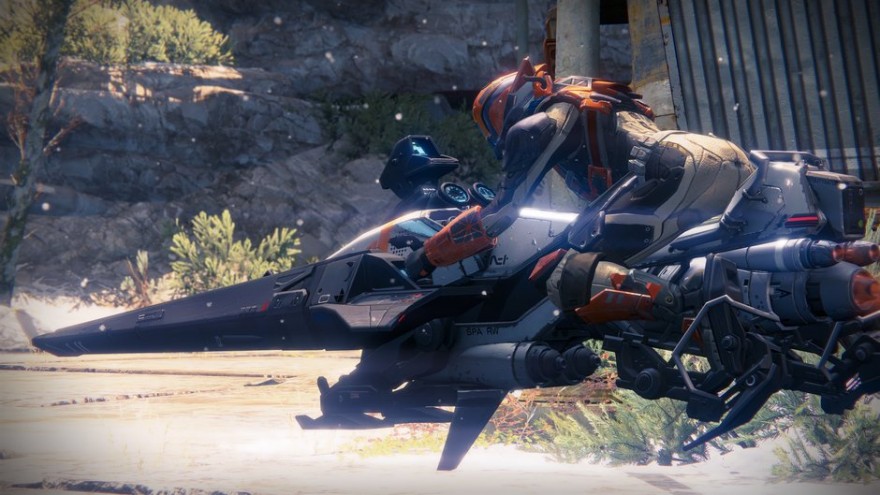 Destiny has wonderful laser shit. A mysterious woman disappears at one point in a web of purple energy, energy that vibrates and coalesces and then curdles, turning globular, like futuristic cottage cheese. Later, an enormous globe swirls with orange lines, then evaporates in red-orange mist. The fusion rifle lets you essentially vomit lightning on your enemies.

For many games and movies, such laser shit is a feint—something shiny to look at while the writing and direction churn out a reliable experience. This is not the case in Destiny, where the wonderful glowing laser shit is one instrument in a much larger orchestra. Because, it is clear from the opening pink expanse of sky, everything in Destiny is sumptuously designed—architectural design, product design, user experience design, audio design, hair design, font design, environmental design, and, yes, laser shit design—all working together, as good design does, toward a single end-goal. And that end-goal becomes clear within minutes: Bungie wants to make the biggest videogame ever. Not in size or sales or length, or at least not just those—but in spirit.

Sometimes, this largesse looks like, well, largeness. On Venus, for example, huge slabs of stone rise at right angles from the ground, floating up into the mustard yellow sky. We do not see where they end and we are not invited to find out; they soar past our vision as we engage wave upon wave of beady, red-eyed cyborgs, who die, wave upon wave, in bursts of wonderful yellow laser shit. But walk up to one of these slabs and just stare: moss climbs up one side, and the wind coming in off the sea has beaten away at the other side, exposing its metallic core. Patterns are embedded in the metal, tiny bleating lights. Many videogames switch weather patterns as if doing a magic trick, and it can, indeed, feel magical, watching storm clouds roll in over Los Santos. But Destiny’s ecological considerations are several orders more grand. The weather is not to impress you. The weather is because time exists.

This sense of a history-rich future is indebted to the artist Ralph McQuarrie, who designed much of the look and feel of the Star Wars universe, and who is credited with popularizing what’s called the “used future” aesthetic. Contrary to the gleaming hallways and perfect uniforms of, say, 50s sci-fi, McQuarrie’s vision was worn-in, dusty, bruised. Shit didn’t match. The wind swept across Tatooine and into Luke Skywalker’s hut, and it was this richness—even before we cared about Luke or his dad—that we invested in, just as we invest in Destiny’s worlds. This is helpful, because Destiny’s story, such as it is, is a mess. I finished the game without being clear who the antagonist or protagonist was—a rare feat of fussy, non-descript plotting. For story, look, instead, to the skies. Look to the architectural shift, from flooded basement to inky black office building. Look at the moss, which you can almost smell.

What else could you call a game of such scope?

There is so much visual information, arrayed in such painterly swaths, and Destiny is so absolute in its willingness to let me frame it as I wish, that I often felt I was missing important details. Attack ships swarmed, grass swayed. I wanted another TV stacked on top of mine, another one next to mine, to catch it all. I yearned, at times, for a cinematographer and an editor to make sense of this world, to help me see the right things. But if that were the case I’d only yearn for the inverse: to be let loose with a handheld camera in that world, to feel its dirt, to stare at its slabs of stone for minutes on end.

Stick a gun on the end of that camera, and you have Destiny. What else could you call a game of such scope? Star Wars, after all, is taken.

I’ve often wondered what sort of artwork it is that Bungie makes. They’ve fallen out of favor, in recent years; “playing Halo” is seen as the precursor to “playing Call of Duty”; it’s a world, we presume, of wrathful teenagers, of casual racism and corpse-humping. This is all true, but it’s also a shame. Bungie’s worlds have heart, they have color, they have coherence. (They have David Cross!)

They’re more Spielberg than Michael Bay, more Springsteen than Aerosmith. Most videogames aspire for Blade Runner or Terminator, but Bungie aims only at Star Wars. The Halo series, and now Destiny, have that rare flavor of the biggest in a medium earnestly trying to also be the best. The magnanimity feeds on itself: If Springsteen isn’t the biggest rock star on the planet, an album like Born to Run is just bluster. If Star Wars isn’t a smash hit, then that opening text crawl is just confusing. This confidence is a surprisingly rare quality in art, and it’s worth being a part of. It’s worth rooting for greatness.

I am, in other words, a Halo apologist, and a “poptimist,” and I always will be, because if not I have wasted my life. Up through ODST, I played every Halo game until a new Halo game came out, and I fell back into it pretty heavily when both Halo: Reach and Halo 4 came out. All of them represent different things to me—Halo 3 will always be synonymous with Weezy’s big mixtape run, my first summer in Chicago, a particularly bad restaurant job—and this was only possible because all of them were so long, so overstuffed, that they could define eras. At its hardest settings, a mission would take an afternoon, rolling from vista to vista, each battlefield a slow crawl. You’d brave the mouthbreathers online because there were so many different ways to brave them. Play out a war; play around with swords. Play a thing called Griffball.

But Destiny offers no such bounties. Instead it offers Bounties, tiny tasks to keep you busy. As big as it is, there’s not much else to do. You set your sights on that far-off, galactic horizon, and find yourself there a couple afternoons later. They tell you to become legend, and soon enough you are. And then what? You are shuttled into multiplayer, in which the architectural grace and narrative volatility of previous Bungie games has been replaced by a surprisingly cynical Call of Duty impression. You take on the Bounties that seem doable.

Destiny’s post-game content—in which we’re encouraged to repeatedly replay those levels for better gear, to then take on epic, multi-hour raids—is engineered to force everyone into the relationship I had with Halo for so long. It’s all or nothing; Destiny is your favorite videogame or gtfo. A steady trickle of new, excruciatingly difficult tasks are to lure us back, again and again, for years, until Destiny Strikes Back and we get to explore the caves of Neptune, or whatever. And, truly: who knows what Destiny might become over the next decade? Who knows where any of us will be in life? Where will you be in February 2017? Are you busy in early autumn 2023? Bungie has been thinking four-dimensionally for too long; Destiny asks us to be invested in the future of Destiny, because, presumably, it is our destiny.

Luke Skywalker had a destiny, too. The Emperor told him it was to take his father’s place. Yoda told him it was to kill his father. His father told him it was to die. They were all wrong. If I had my druthers, Bungie would’ve spent the past fifteen years iterating The Library from the first Halo game; I’d still be picking my way through hallway after hallway, hour after hour, nursing a terrible beer in my basement in college. What they’ve made instead is both bigger and smaller than that, but we’re being sold on the promise that, eventually, it might also be that. It might also be everything.

Today, of course, Destiny is a mess, but I sympathize with it. It contains multitudes, and I see the multitudes in it. Like Destiny, we all struggle with what came before us. We struggle to measure up to it, to change it, to learn from its mistakes. We want to be bigger than our parents, and in some ways, we always are. But ultimately we, too, are human. Like Luke, we can’t live up to others’ expectations; no one can be everything to everyone. What else could we call such failure but destiny?