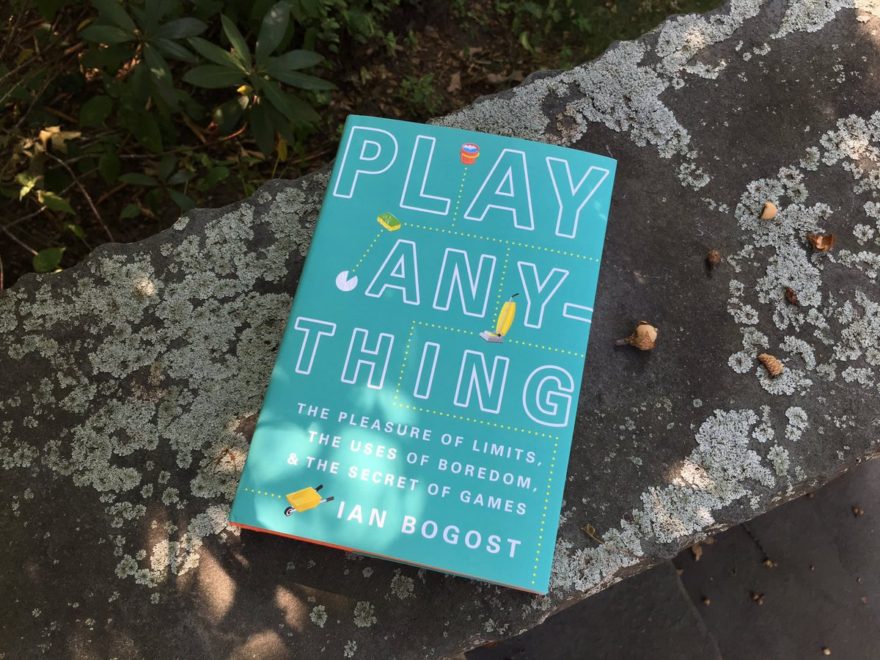 In the strata of books about videogames, I offer the following overly simplistic codification:

1. Books about a specific game or game developer

2. Books about a specific period of time in the history of games

3. Books about how videogames are art, dammit

And then there’s Ian Bogost’s new book Play Anything, which isn’t so much about games as distinct artifacts as it is about why games and play are an essential strategy for navigating the banality of the world.

Sometimes the experience of grocery shopping, of sitting in traffic, of attending meetings, can feel like an elaborate series of fetch-quests—a digression from the main story of our lives. Banality is, at its heart, absurd. What Bogost sees in situations like these is an opportunity to attune oneself towards the objects in one’s path, the multitude of factors that make up the restraints and limitations of the world, and appreciate them on their own terms.

we re-instill joy in the objects around us

The anecdotal linchpin on which the book rests is Bogost’s young daughter being pulled along by her father as they navigate a shopping mall. Rather than feel powerless and thwarted in the overcrowded space, she adapts, making a game of avoiding the grouted lines in the tiled floor. It’s an incredibly appealing premise; Bogost goes on to mine the spaces we usually think of as cultural dead zones for aesthetic, structural, and moral value. He intentionally conflates museums and Wal-Marts in what might, on the surface, seem like a flippant exercise, but with time comes to feel empowering, fresh, and engaged. Spaces that are easy to think of as intricate prisons of our own design can become the parameters for games of our design.

The philosophical and spiritual cousin of Play Anything is David Foster Wallace’s This is Water (2009), which Bogost references at several points in the book. In This Is Water, Wallace suggests that the path to mitigating banality while saturated with hypercommercial, irony-heavy experiences lies in developing a kind of sincere empathy with others. While Bogost maintains the value of sincerity, he breaks down the internality of constantly imagining what everyone else is experiencing, and suggests that instead we re-instill joy in the objects around us—that we move from mindfulness to worldfulness. That we contend with the world as it is, rather than with the world as it might exist in the minds of others.

At the heart of Bogost’s vernacular are assumptions about games and play that suffuse much of our writing about videogames, like escape from a diametrically opposed concept of ‘work,’ and the stratification of high and low art. The philosophical questions he examines—how to live and define oneself in relation to the world—are classic, old-school ontology in the context of our ubiquitous postmodern irony. But to place play and games so explicitly at the center of these question, and at a time when videogames have emerged as an important medium, makes these questions less abstract, makes Bogost’s solutions more readily applicable, and makes Play Anything an essential book for the readers of this site.

Find out more about Play Anything on its website.