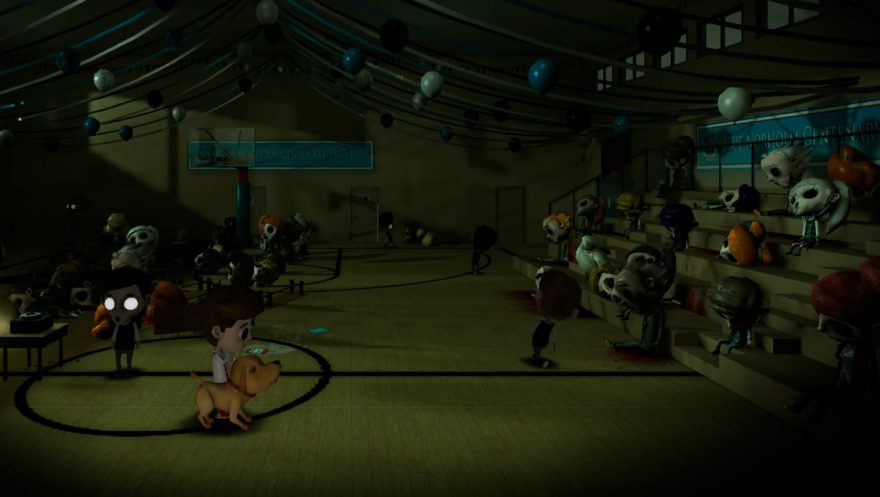 When you’re the “new kid” the first day of school can be extremely scary. I’ve been the new kid at a new school in a new town. You have to quickly figure out a large number things in a short amount of time. You’re trying to figure out the layout of not just the school but the town too. You are trying to memorize names and attach them to faces. Trying to desperately find someone to talk to, someone who maybe will be a friend. That first day of school in a new town as the new kid was terrifying. So, I can’t even imagine how much more challenging and scary a first day at school must be for a child who is blind.

Ian’s Eyes is about that very experience. Ian is a young boy arriving at a new school. Ian is blind, but luckily, he isn’t alone. He has a trusty and ever-loyal guide dog. And it’s this guide dog, not Ian, that the player will be controlling. Playing as a dog and helping a young kid was the initial idea that led the small team of Sindie Games to create Ian’s Eyes.

“We always wanted you to play as the dog,” Ana Coronado, the lead artist on Ian’s Eyes told me. But the team needed a reason why the boy needed the dog’s help. “We were thinking ‘what would make sense?’ and the natural idea was that the kid had to be blind and you the dog had to guide him.”


The reasoning behind setting Ian’s Eyes in a school came from Sindie Games being a smaller team and this being their first game. Exteriors are harder to create so the three person team decided to set the game somewhere that would be small and consist mostly of interiors. Setting the game in a school also led to the decision to set Ian’s Eyes during Ian’s first day of school. Unfortunately for Ian, his first day of school is filled with deadly zombies. And it’s up to you the player to help guide Ian through this nightmarish schoolhouse.

“You can bark, run, or use stealth”

One of the biggest challenges Sindie Games faced early on in development concerned the dog and what it would do. “At the beginning we had a bit of a struggle thinking of mechanics that were fun and realistic at the same time,” Coronado said. She also listed some of the mechanics that the dog is capable of in Ian’s Eyes: “You can bark, run, or use stealth. What the player has to do is to clear the way so Ian can pass safely.”

Depending on the situation, the player will use these options to keep zombies away from Ian. An example that Coronado described was having to bark and make a lot of noise to bring zombies to you and away from Ian. But while the player has different options for keeping Ian safe, Coronado clarified that violence isn’t an option. “There is no attacking in it, so the dog never fights against the zombies.”

Recently, Ian’s Eyes was successfully Greenlit on Steam and it now has a Steam Store page. The game won’t be out until later this year, but Ian’s Eyes is already getting lots of feedback from fans. Coronado says the team is happy and all of the support is “giving us the energy to keep working on Ian’s Eyes.”

Ian’s Eyes will be available later this year on Steam for PC. The team is hoping for more platforms in the future. You can also check out the Ian’s Eyes twitter account for updates on the game.