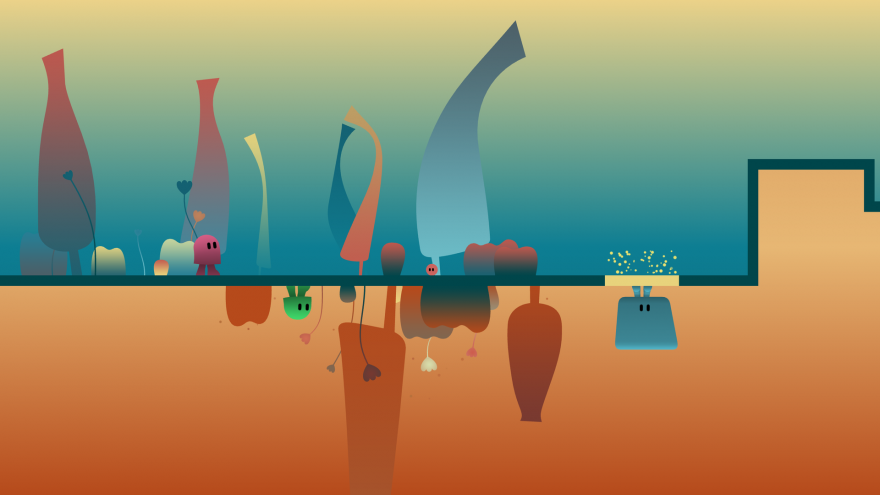 The only thing that could possibly spoil the elegant fluctuations of ibb and obb is you and your partner. Everything but each of your own temperaments and the limits of your combined lateral thinking can be predicted, calculated, and then performed—it’s physics in action. If there isn’t shared joy and eagerness when faced with the kind of adversity that tests the feasibility of your cooperation, everything starts to crumble. Laughter turns to groans; progress becomes repetition.

It makes sense if you see ibb and obb as a videogame that was designed to teach the lessons of esteemed English physician Isaac Newton. He said: “I can calculate the motion of heavenly bodies, but not the madness of people.” Simply put, relationships in physics are reliable, those between humans are not. There couldn’t possibly be a better way to communicate the conflict that sits behind every moment of ibb and obb than that.

ibb and obb teaches basic physics without the mumbling professor telling you to turn to page 36.

Each sidescrolling world is split in two across the middle (or thereabouts), and gravity is inverted on either side—going underneath means running upside-down—as if an enactment of ‘s notion that “to every action there is always an equal and opposite reaction.” Portals allow bodies to pass through the divide, but not all of them—some are color-coded allowing only ibb or obb through.

The opposing gravity isn’t the only difference between the top and bottom of the screen: Spiky enemies show their vulnerable underbellies, hues are reversed, and steep climbs become great drops. Yes, as if the axioms that inform the difficulties in a world without arms wasn’t challenge enough, the terrestrial contours are warped and jagged to inhibit progression, inviting you to stand on each other’s heads for greater jump height and to perform other, similarly cute acrobatics.

The bounce pads are the most satisfying tool for your cooperation. The force that is exerted on one side of these yellow pads is pushed through to the other and enacts upon anything stood upon it (See: Isaac’s Third Law of Motion).

So, when forced to split up, one of you can gain velocity by falling from a height and then landing on the bounce pad to propel your friend on the other side just as high into the air. If that wasn’t obvious enough, the vibrant flora of ibb and obb‘s halcyon worlds stretch out like fingers, inviting you to exceed their reaches.

As with the momentum-based puzzles of Portal, ibb and obb teaches basic physics without the mumbling professor telling you to turn to page 36. Each hill you climb, every bouncing enemy you defeat, all the times you trade forces through the opposing gravitational fields; they’re all mathematical achievements without the pain of solving algebra. Its beauty is in how it hides the numbers in favor of playing with kinetics. At first you’re taught the basics, while later parts of the game are equivalent to closed book exams, where darkness falls to hide the components of each sum, only to be illuminated by your combined luminosity (sticking together is always best).

Obviously, you’re not going to be able to conduct any lengthy calculations inside of ‘s Second Law of Motion after playing ibb and obb, but you will understand the founding principals. And let’s be honest, it’s much more entertaining than sitting through a lecture.

You can purchase ibb and obb on Steam and the Humble Store. It is also available on PlayStation 3.