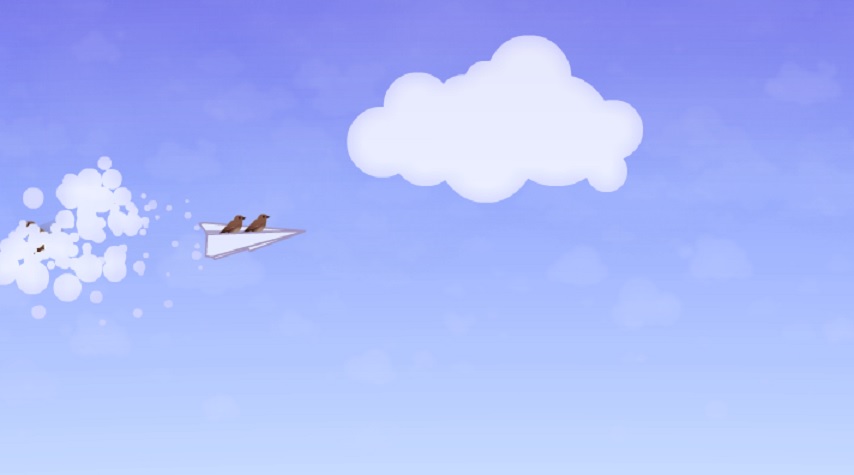 If Socrates did a Let’s Play of Icarus it would undoubtedly fail to entertain just about everybody these days. Granted, the Athenian philosopher wasn’t known for his videogame commentary (although I would love to see that!), but I’m theorizing based on his logical rejection of “akrasia” and how that would prevent him from progressing in the game at all.

Akrasia is acting on something that you know to be against your better judgement. Taking drugs for their psychic euphoria while completely aware of the negative effect they carry would be an example of an akratic action. Socrates didn’t believe in akrasia: “No one freely goes for bad things or things he believes to be bad.” Clearly, he never attended a bachelor party. Icarus, on the other hand, is a game that entirely relies upon the player defying Socrates’s belief.

like how an orgasm has a hold over the contortions of your body.

In Icarus, you play a paper airplane and, just like in the Greek myth the game is based on, you’re told by a wiser airplane (representing Icarus’s father Daedalus) that you shouldn’t fly too close to the water, nor should you approach the sun. The water is right below you, in plain sight, so this two-part warning raises a dangerous question in our “live fast, die young” mentality: How far up is the sun?

In recreating Icarus’s first and final flight, I became increasingly aware of my papery fragility, causing me to question the purpose of the birds and clouds that flew across the screen—is this world designed to hurt or comfort me? In encountering what I perceived to be near-death moments by flying directly into these other entities, I was surprised to find relief and joy in their peaceful interactions. This is what led to my relentless upwards pursuit of pleasure and the deathly conclusion of Icarus (both the game and the man of myth).

Akrasia has hit me in momentary and pure form outside of games before, but never inside. The rare times it has happened before always involves me walking along a path when a rush of endorphins explodes in my brain for whatever reason. I submit to it entirely, and it makes me want to just keep walking, maybe faster and faster, towards anything and everything (even traffic). I feel like something else in my head—perhaps the chemicals—is controlling my unstoppable forward motion, like how an orgasm has a hold over the contortions of your body.

It’s exactly this state of overwhelming ecstasy, realized as a paralyzed forward motion, that gripped me when flying into space—the stars, my graceful form, and heavenly chords all aligning—while playing Icarus. Predictably, not long after, the paper airplane burst into flames. It was the kind of suicidal coitus that the logical thinking Socrates could only ever dream about as he remains at the game’s starting position completely safe from harm.

There are at least two ways you can adapt a story into a videogame format: diegesis and imitation. Most videogame adaptations tend to retell a story through narration, which is diegesis—telling you the story—while gameplay falls into imitation as it shows you the story. Icarus goes a step further as it not only shows you what happened but has you directly re-enact it. I felt the joy of flight that Icarus did and just as foolishly met the same fate as him.

To me, it succinctly demonstrates the potential of videogames as a storytelling medium; beyond merely telling and showing, but in being able to recreate original feelings in us that inform our actions, almost like we’re unknowing puppets in a stage play. That may sound deceptive and restricting, but as far as adaptation is concerned it’s a powerful form of the practice.

You can play Icarus for free on itch.io and Newgrounds. Icarus was made for the Public Domain Jam.