The fighting game community has been having a strange summer. In June, Community Effort Orlando 2015 was wrapping up its semi-finals series for Ultimate Marvel vs. Capcom 3 when competitor Kenneth “K-Brad” Bradley felt his entrance to his match needed a flourish:

A day later, ESPN posted his video on their website. Suddenly the FGC found itself ushered into a spotlight larger than it was used to—at this moment the video had over 1.5 million views when also taking into account views from WorldStarHipHop. For comparison, “Evo Moment #37”, regarded by many to be the iconic viral video moment for the community, has been around for nearly a decade, and has just topped 2 million.

After EVO2015, WWE “Superstar” Xavier Woods, working under his non-WWE secret identity Austin Creed, released a video with community regulars Mike Ross and Ryan “gootecks” Gutierrez of CrossCounter.tv learning the basics of Capcom’s upcoming iteration of their flagship series, Street Figher V. It’s starting to seem like as the fighting game community grows, the braggadocious specter of professional wrestling is not far behind it.

K-Brad’s entrance at Community Effort Orlando 2015 and Xavier Woods’ surprise appearance, which received little to no fanfare from WWE’s corporate offices, are special mostly because nothing about these events are at all standard for the fighting game community. Also known as CEO, the tournament is heavily themed around professional wrestling. A wrestling ring serves as its main stage. All competitors must choose an entrance theme, despite the fact only a few 2% manage to make it to the ring. The trophy for each game is a title belt. No other tournament series, even the aforementioned global-wide Evolution Championship Series, has an identity that is as explicitly performative as CEO’s. As for Xavier Woods, very rarely do established television & film stars pay explicit homage to a videogame community—though it does happen.

The fighting game community (or FGC, among insiders) has always grappled with a staggered identity. The FGC actively distanced itself away from the large, established esports federations, like Major League Gaming. Capcom and other videogame publishers are only now acknowledging the FGC as legitimate. The FGC itself came to terms with including the Super Smash Bros. series at major tournaments after largely ignoring the game’s large competitive scene, the game’s lead designer even claiming it “not a fighting game.” The organizers of CEO are starting a “CEOtaku” tournament event to drum up support for players who excel in “anime fighters,” a subgenre of fighting games that branch off from the more mainstream games like Street Fighter and Mortal Kombat. Clearly, the identity of the FGC is still in flux.

Clearly, the identity of the FGC is still in flux

The formation of the fighting game community’s identity has been as tumultuous as any real person’s, yet it is interesting that the FGC’s widest exposure to the broader world was articulated through the lens of professional wrestling. A performance of spectacle, professional wrestling has been thought of by writers as a sort of male drag show—gestures of exaggerated masculinity are performed and put on display for the entire world to see. Sometimes, these masculine gestures are tied up with the performer’s actual identity: Stone Cold Steve Austin’s irreligious, beer-guzzling aggressive persona conflates with his exuberant atheism and past domestic abuse issues.

The point of professional wrestling, according to this thought, is to let the audience (and in some aspect the performer) judge what is and what is not correct behavior for men. The philosopher Judith Butler, who writes about gender and identity, meditates on how masculine and feminine identities are performances and that societies punish people for not performing those roles correctly. In her writings she notes that “to be female … has no meaning,” but one must “conform to [a] historical idea of ‘woman.’” Performing gender identity “serves a social policy of gender regulation and control,” and “…those who fail to do their gender right are regularly punished.” We can understand gender not as an essential quality but as a performance of stylized acts.

It may not seem like it at first, but gender is important to think about in fighting games. In a genre where gender is signaled in over-the-top and sometimes grotesque sexualized terms, gender construction is absolutely arbitrary when it comes to a fighting game’s mechanics; there is nothing inherently masculine or feminine about the quarter-circle-forward joystick motion of a fireball attack, neither the 360-degree motion required for command grabs. The only function gender characterization serves is for the player who has never played a fighting game in her life—with no concept of the game’s mechanics or rules, her character choice often boils down to “who looks cool.”

In some games, avatar choice does not change how most of the base game is played. But in fighting games, aesthetics of an avatar work as shorthand to signal how different a character can play. In Street Fighter II for example, the behemoth Russian wrestler Zangief forces the player into a slow, plodding avatar in a game where every other character moves much faster. However, if the player learns how to negotiate Zangief’s speed and perform the command grab with consistency, she becomes a dangerous opponent. The British paramilitary fighting machine Cammy grants the player a highly mobile, fast-striking character who forces opponents to play a highly technical defensive game. But, if the Cammy player is too overzealous with his performance, he can be punished by his opponents and suffer heavy damages. On the other hand, Ryu and Ken have similar clothes to match their similar playstyles—but only a player who has experience with both Ken and Ryu can spot the different nuances of how these two characters play.

These differences in approach can be thought of as varied “play styles.” Fighting game advice is often given in terms of “playing the game you want to play” and play style is very much a part of that dynamic. Experienced players already know what style fits them best through trial and error. New players, on the other hand, must learn how to perform the moves and play style engendered into their chosen identity if they want to win. A player may choose Ryu because she’s drawn to his aesthetic, but find the heavy fundamental game too stressful to perform with success. She is forced to make a difficult decision: learn a game which she finds tedious and difficult—the opposite of fun—or abandon the vessel she found so appealing to begin with.

But there is a certain joy found in fighting games when you find a character whose design not only appeals to you, but whose play style meshes with your own thought patterns so well that the character feels like a second skin. You effortlessly move with her, you kick with her, you throw down opponents with her and most importantly you win with her. Matches with other opponents become not a grueling, anxious ordeal but an empowering display of seamless communication with your character. Before long, you start to identify as your character—you become her.

Before long, you start to identify as your character

At a certain point you’ve figured out how to play your game with your character. You discover how the lessons you learned with her can be ported to other fighting games, mastering those techniques. You start playing more opponents—people with completely different foundations. New strategies and situations arise; even though you’ve played matches with these two characters thousands of times before, it’s still novel because the person embodying your opponent is bringing to the table his years of experience with fighting games, sometimes decades (Street Fighter turns 30 in 2017). Sometimes, you find yourself abandoning your characters because they simply are no longer viable—something “2D Fighting Game God” Daigo Umehara still grapples with when it comes to his original character Ryu.

Games are unique spaces of expression; very rarely do we have a space where we’re allowed to perform exactly how we want to perform, and very rarely does a framework seek to approve such individualistic expression on any term. Some games only give us the space to express our actions in equally simplistic terms accessible by all, or on terms so ambiguously complex they become prohibitive. Fighting games, though, give us a space to express ourselves in the individual identity of the fantastic, sometimes grotesque but always absurd and clearly legible. And even though a community is essentially built on a game about beating the crap out of each other, the space created could be one of a broad acceptance of multiple articulations. Professional wrestling in performance is a shocking expression of our violent capabilities, but in practice it becomes a safe space where wrestlers put their physical well being in the hands of their partner. The fighting game community may be a place of competitive friction in performance, but in practice could be an open stage to express the empowered ass-kickers we can be. 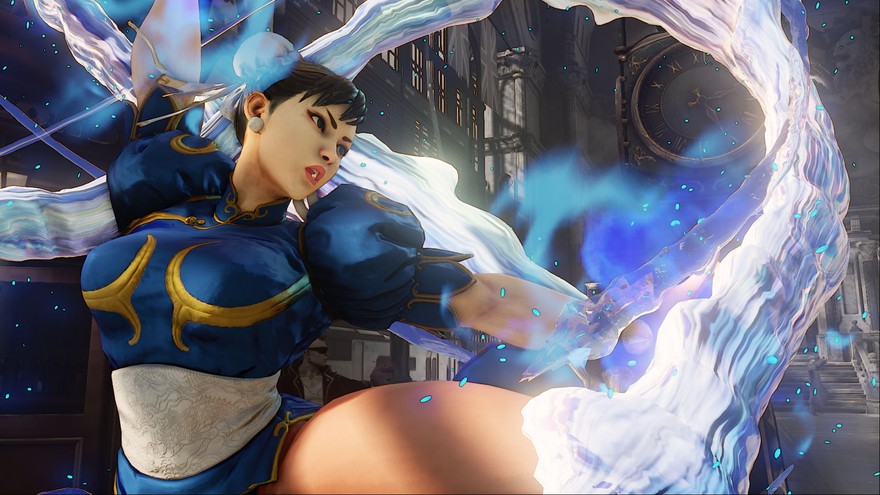