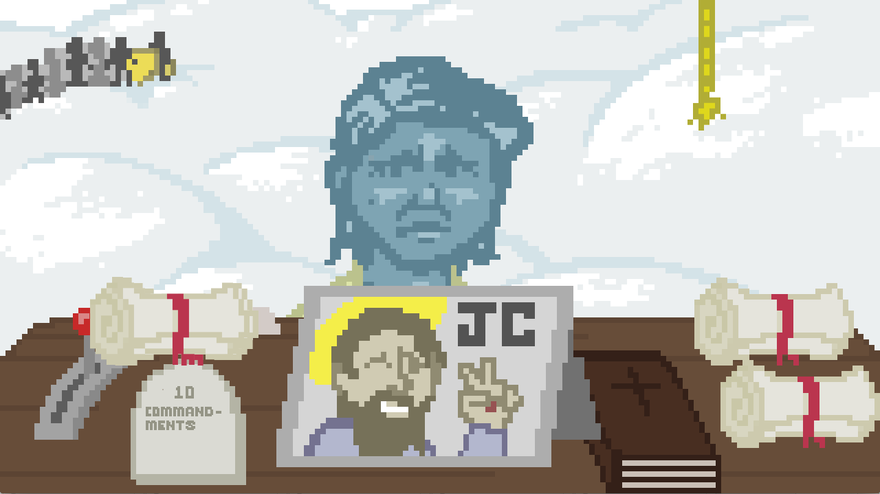 “Go to Heaven for the climate, Hell for the company.” – Mark Twain

Absolutism is absolutism, no matter how you slice it. Whether worshipping a God or a state, christianity or communism, absolute answers to complex questions often lead people down iffy moral territories.

Papers, Please extolled this truth in the context of communism. Forcing players to pass judgement on powerless immigrants, it revealed the inhumanity behind the bureaucratic state system—an educational (if not entirely unpredictable) takeaway for most players. But the religion-centric translation of Lucas Pope’s critically acclaimed game, entitled For the Love of God, shows just how absolutism can sneak into all corners of the human race’s philosophies.

In For the Love of God, your rule book is the Ten Commandments, the game: soul processing. The newly deceased await their judgement in a seemingly infinite and endless line leading up to the pearly gates (I can imagine the Bible camp dweebs being the over-prepared ones, with tents and TVs like it’s an Apple release day). Each person comes to your soul-processing desk with a scroll and their metaphorical heart in hand. The scroll acts like a cheat sheet of the person’s most notable moral qualities, while you act as the ultimate judge of this poor soul’s worth.

God’s absolutism makes for some awkward moral quandaries indeed in For the Love of God. At one point, I was forced to send a homeless man to hell for collecting stop signs because, technically, that’s against the whole Thou Shalt Not Steal bit or whatever. Next, I sent a dog abuser to heaven, because they don’t mention dog abuse in the Ten Commandments.

Like in Papers, Please, your job is to ensure the “right” people go to the “right” place, while the “wrong” people meet their rightful end too—whatever hellish existence you, the player, have doomed them to. Like Papers, Please, the qualifications that determine the “right” and “wrong” of the person start seeming pretty arbitrary, especially in the face of life’s endless complexities. But, unlike Papers, Please, at least you’re not being an asshole in the name of the dystopic state of Arstotzka. You’re being an asshole in the name of God (or, if you want to get all titular about it, for the love of God).

Yet this satirical revamp of Papers, Please certainly doesn’t condemn all christians or christianity. In fact, to some extent, it helps dispel some of the religion’s more harmful misunderstandings, like the fact that being gay is neither in the Ten Commandments nor ever really even described as a horrible sin in the Bible. Gay and LGBTQ souls fly up to heaven all the time in For the Love of God, and it feels nice to be the gatekeeper when you get to give just rewards to good people.

Reimagining heaven as a bureaucratic state proves oddly befitting in every way. Yaweh’s micromanaging style truly takes center stage in For the Love of God. Taking the whole “cleanliness is next to godliness” thing to heart, the big man upstairs constantly shames you for your horribly cluttered desk space. But who would blame him? The (most likely state-issued) snapshot of J. C. looking like a true brah’s brah at the front of your desk deserves all the visibility possible. I mean who could deny that smile and wink, even when it’s telling you a dog abuser should be sent to heaven?

You can take your heavenly seat in For the Love of God for free on PC, Mac, and Linux.