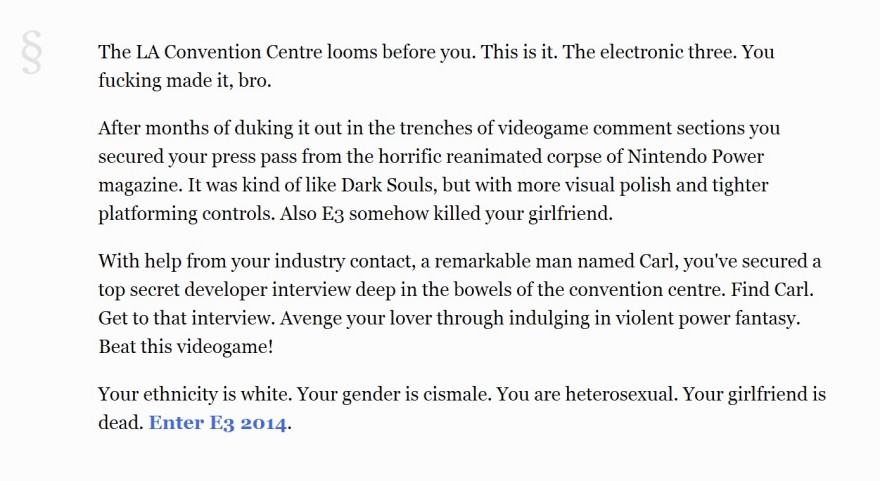 If you’re reading this it means that you somehow avoided the franchised jaws of the Electronic Entertainment Expo of 2014. Either that, or you’re still limp with recovery after being chewed up by the LA Convention Center’s acidic halls. You’re writhing amid the rugged shapes of your quilt, stopping briefly to stare emotionlessly at a tablet or a laptop, aren’t you?

If so, you might want to give Brendan Vance’s You Died Alone At E3 2014 a miss—it’s too soon for you to relive the horror. This biting parody is a text adventure that turns the grinning mass of corporate gaming culture on show last week against itself. It depicts a videogame power fantasy that follows the journey of a sham member of the gaming press (typically a white, cismale, and heterosexual hero) to avenge his girlfriend and also attend a top secret interview inside of E3 2014.

The entire convention is personified as a spectacularly rancid beast, inflated by its own self-importance. Its guts are a carnival of lavishly dressed gore and branded light beverages being pedalled to crowds of eager drones. The Microsoft and Sony booths chase each other across the ceiling with gnashing jaws. Ubisoft brought an elephant. You give the graphics of a man’s crushed head—his brain spilling onto the carpet—a 7.2 out of 10.

Brand loyalty is turned into a metaphorical horror: A grotesque description of a Mario statue slowly digesting an entire person from the legs up while they continue to fumble with a gamepad, uncaring for their gradual demise. It’s an absurd dark comedy that hyperbolizes and gives physical form to the rhetoric behind manufactured “console wars,” the marketing jargon around big budgets and new hardware, and the meaningless verbatim that is sometimes seen in press previews.

Brendan made You Died Alone At E3 2014 “in honor” of the grassroots digital convention IndiE3 that rapidly emerged last week. IndiE3 was created by a small collective of game creators that E3 ignores due to their lack of capital. It was for those who were tired of E3 and wanted to switch to another channel that showcased small games and alternative voices. (Full disclosure: my other site, Warp Door, had a stream showing off some of these games, and I appeared on a panel.)

Brendan’s witty and gross adventure is an incisive imitation of the ridiculousness and perniciousness of the dominant videogame culture that IndiE3 substituted for its own. Perhaps with more of this kind of parody, criticism, and alternatives, E3’s brand of gaming monoculture will start to dissipate.