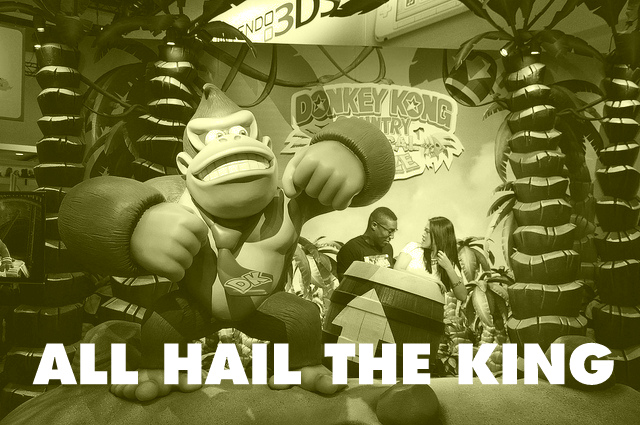 I’m stuck in traffic, listening to David Bowie, heading south on I-93 through an underground highway below Boston known as “The Big Dig.” It was the most expensive highway project in America’s history. Completion took ten years too long, cost billions more than promised. Finally, once it was finished, cement plates fell from the ceiling and crushed a car and the woman inside; a contractor used cheap glue to shave a few dollars off their receipts.

And so it’s without no small level of trepidation I steer my Mazda 3 hatchback into the sewer blackness underneath Beantown. Game creators likely feel a similar reluctance as we embark on a new generation of hardware. Sony and Microsoft have unveiled their next home consoles, each capable of bigger experiences, requiring larger investment.

Nintendo’s appeal for our time is already out in the open; after early enthusiasm, the Wii U has stalled with anemic sales and a trickle of games. Many expect it to crumble, its cheap glue the use of underpowered components and an overambitious controller that causes confusion. I’m on my way to test the foundation: specifically, to a Best Buy in Dedham, MA, where Nintendo is showing four unreleased Wii U games to the public just days after announcing them at E3.

Nintendo needn’t toot their horn as loud as their competitors because they simply don’t have to.

And so it was against this perplexing and loud fanfare that we find Nintendo, one of the world’s oldest makers of play. After Sony and Microsoft sounded the “Next-Gen” trumpets from their press conference pedestals, Nintendo instead showed a pre-recorded video, announcing a slew of new games coming to Wii U, followed by an in-person play and Q&A session for the media. The initial reaction from fans and critics alike was subdued. Ben Kuchera of The PA Report wrote that “Nintendo’s limp attempt to divert attention from itself hardly warrants a mention,” while the article’s title said the company from Kyoto “barely bothered to show up.”

Kuchera is right about one thing. Nintendo needn’t toot their horn as loud as their competitors because they simply don’t have to. They have billions in cash from the Wii and DS era. They’ve sold hardware at a profit for generations. And at a time when exclusives are rarer than unanimous votes in Congress, they wield a treasure trove of characters and worlds only available on their platforms. And yet the doomsayers proliferate.

The response comes from unmet expectations, a misunderstanding between what is and what should be. The next ballyhooed free-roaming Mario wasn’t the next paradigm-shift a la Mario 64 or Mario Galaxy; instead Super Mario 3D World builds off of 2011’s Super Mario 3D Land, a brilliant chimera of past styles that showcased their 3DS handheld. Mario Kart 8, the next iteration of the uber-popular series, adds anti-gravity and mobius strip tracks, referenced in its title. But this, too, follows in the footsteps of Mario Kart 7, a 3DS game.

The console can become a supplement, or extension, of something begun elsewhere.

Twenty years ago, Nintendo’s big new titles would start on console and shift to portables. Raise your hand if you’ve played a watered-down Game Boy port just because you loved the full-blooded console version and were hungry for a taste on the road. With technology getting smaller and more efficient, handhelds and smartphones now have the juice to compete. The console can become a supplement, or extension, of something begun elsewhere.

One of the Wii U’s features, Off-TV Play, even slings its content entirely onto the controller’s screen, providing a handheld experience at home (and freeing the Telly to watch the NBA Finals). Everything is moving away from the one big screen and into your hands. The prolific Leigh Alexander wrote eloquently about this very phenomenon, questioning Microsoft’s focus on The One Big Screen. Certainly Nintendo agrees, whose commitments stand in direct opposition to its hardware competitors while continuing to cut their shackles from TV’s influence, going so far as to take inspiration from their own TV-less system for marquee titles.

But intellectual posturing about the House of Nintendo pales in comparison to actual in-person experience. I was about to get some as I drove across town to not only play these games but test the waters of support. Would the store be empty of fans? Do people actually care anymore about Nintendo?

In my car, Bowie’s 2002 album Heathen plays as I approach the store. Every song feels redolent with meaning—”Slip Away, Slow Burn”—every lyric a metaphor for Mario. “Nothing has changed,” Bowie sings on album opener “Sunday.” “Everything has changed.”

The next open slot isn’t until 8:42pm. Four hours from now.

The store is quiet. It’s 4:30pm on Wednesday, one of two days Nintendo will be showing off special E3 demos across the country. Then I spot them: green caps crowded in the back corner. Luigi hats. I approach them and spy a single station, surrounded by two dozen or so people, watching a teen play Legend of Zelda: Wind Waker HD. I linger and observe before inquiring about a line. “There’s the sign-up sheet,” a stocky Asian twenty-something tells me, pointing to a table littered with rolled-up Mario Kart finish line flags. The next open slot isn’t until 8:42pm. Four hours from now. I last attended E3 in 2011; there, the lines were expected, a part of my fishy suspicion that this was an outdated mode for showcasing entertainment. Here, 2983 miles away, the wait was worse. Demand for Mario lives.

My mind flashes to the 90-minute drive to get here, burrowing through an underground deathtrap and burning $4/gallon petrol. I see a bumper sticker: “Republicans / Democrats: Same Shit, Different Piles.” Bowie’s singing about unwarranted adulation; “I bet you laugh out loud at me,” he cries. I think about Microsoft and Master Chief, a hero hidden behind reflective chrome. I think about Sony and the huge whooping applause given to them by hundreds of journalists for the staged equivalent of a schoolyard taunt.

I consider Nintendo’s own intentional myopia, and how they keep giving us what they want to give us, and we keep thinking we don’t want it, and how that “we” is the same hundred or so bespeckled dudes and how the Wii sold almost 100 million systems and is somehow considered a joke.  I consider how Nintendo started life as a playing card company, founded in 1889, selling toys and amusement throughout the decades. Over a century later, Sony and Microsoft were selling TVs and office software.

You never know how badly you want a cat-suit until you’re the only one not in a cat-suit.

Yesterday, across the country in a small showroom, Yoshiaki Koizumi, producer on Super Mario 3D World, wore cat ears on his head and meowed at the press. His game features a new “Cat Suit” power-up which transforms Mario into a fuzzy feline capable of climbing walls and pouncing Goombas with claws. Later, they teased an announcement only to reveal that the trainer from Wii Fit will be a playable character in the new Smash Bros. In the same year investors and analysts have called for their demise, and a year after their first financial loss in three decades, Nintendo is messing around, pulling summer camp pranks while the adult counselors are away. The same mischievous spirit spills from their games.

Back in Dedham, a charitable man-child named Lucas allows me and two other unlucky on-lookers the chance to join him in Super Mario 3D World. We scramble through candy-colored gauntlets. We board a swimming dragon and lean together, canoe-style, through bubbling rapids. Onscreen, Lucas’ Mario grabs a ringing bell and transforms into Cat Mario. The others grab their own power-ups but mine slides into the void, leaving my Toad normal, just a running mushroom head with a squeaky voice. Let me say this: You never know how badly you want a cat-suit until you’re the only one not in a cat-suit. (Bowie has a song about that, too.)

Nobody knows if the Wii U will be a success, or if the Xbox One and PlayStation 4 will trounce Nintendo with their heavy, expensive machinery. But too many are discounting the power of the familiar, unexpected whim. I left behind a gaggle of green-hatted fans awaiting their turn at the controls. Driving home I headed west, away from Boston and the Big Dig’s underground Cat’s Cradle of cement, instead taking back roads through smaller towns. The trip took longer, but I didn’t mind. Something about white clouds in a blue sky makes you optimistic for the future.