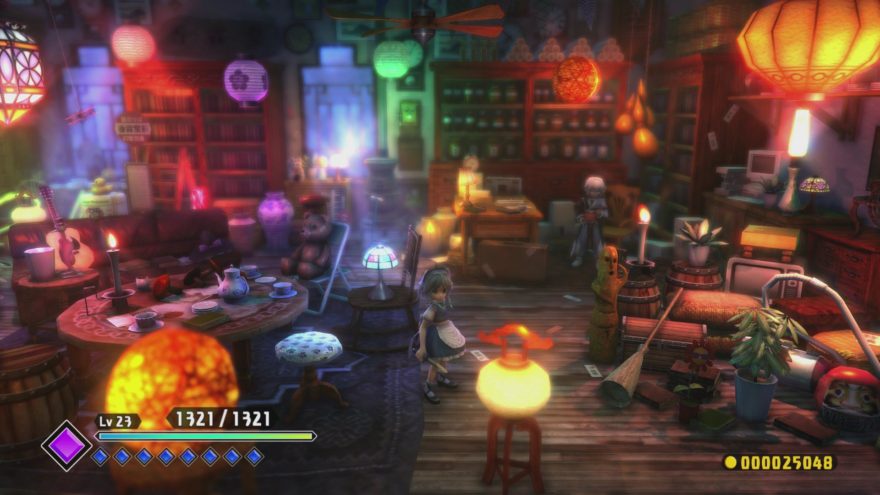 Being bored sucks. There’s many ways that we find ways to cure our boredom: videogames, books, music, watching a decent show or movie. For the 500-year-old vampire Remilia Scarlet, those petty activities are far below her. Her boredom is on a whole other level, one the likes of which her maid companion Sakuya Izayoi has never seen before. Luckily, there’s a neighboring monster that’s terrorizing the countryside near her manor, the adequately titled Scarlet Devil Mansion. Finally, the excitement she deserves. That is, until the beast destroys her home, and then it’s just a case of revenge.

That’s the basic plot for the new XSEED-localized action-adventure Touhou: Scarlet Curiosity (developed by Ankake Spa), just one of many fangames crafted in the bustling The Touhou Project community. The Touhou Project didn’t get its start in action-adventure flurry. In fact, it emerged from something quite the opposite: danmaku games, probably more familiarly known as the bullet-hell genre (typically 2D games where gleaming projectiles coat most of the screen).

I first learned about The Touhou Project a few years ago. I’m kinda ashamed to admit that, since that’s a mere dent in the two decades that Touhou has been around, its first game popping up sometime in 1996 in Japan. Touhou’s a weird series, emerging as a cult-favorite bullet-hell title originally by developer ZUN, who independently programmed, musically scored, and created graphics for his first games. Then the series took on a life of its own through doujin culture—where fans created their own iterations of Touhou. With ZUN’s blessing, spin-off games, music, cosplay, and anything else that people could create donning the Touhou name came into existence. Of course, doujin games are hard to come by on major platforms like the PlayStation 4, and official localizations of them are even more rare. But recently, all that has changed.

In comes Touhou: Scarlet Curiosity, the second Touhou game to make its way westward with an official localization this year. The first Touhou game to receive a western release came last year through Playism, but it wasn’t translated by any means. Earlier in September, NIS America published Touhou Genso Rondo: Bullet Ballet, which is not only a mouthful to say, but also a shoot-‘em-up-fighting game hybrid of sorts. Touhou: Scarlet Curiosity is the latest effort in ZUN and Sony’s Play! Doujin distribution plan, created in an effort to bring fangames to PlayStation 4.

As I said, Touhou: Scarlet Curiosity isn’t your atypical, bullet-screen blanketing Touhou experience. For that, you’d have to look elsewhere, like to ZUN’s own games. Yet, it does share glimmers of similarities (which makes sense, still bearing the Touhou name and all). Its boss fights still star incredibly charming characters (and both Remilia and Sakuya—Scarlet Curiosity’s two playable characters—have been bosses in past mainline Touhou games). Battles still see you narrowly dodging glowing spheres. Though being a 3D game, you have the option to simply leap over the orbs (which, honestly, offers its own challenges and strategies).

Touhou: Scarlet Curiosity isn’t too hard of a game, at least in the hours I’ve played of it destroying all fairies, wolves, giant centipedes, and other folks and critters that cross my path. That might be where it feels the least like a Touhou game, which are known for their punishing difficulty. But really, Scarlet Curiosity isn’t trying to emulate the immensely hard difficulty of the games that inspired it. Instead, it’s paying homage to the colorful, endearing characters that the series has always had to offer. The sometimes-whiny sass of Remilia. The stoic but devoted demeanor of Sakuya. And everything else in between. Plus, I’ve always wanted to be a knife-wielding maid with a cute frilly outfit. Now with Touhou: Scarlet Curiosity, all of us in the West have a chance to don the guise of a vampire or a maid, and visit the remarkable land of Gensokyo. Given how rare that is, it’d be a shame to squander the opportunity.

Touhou: Scarlet Curiosity is available now on PlayStation 4 for $19.99.