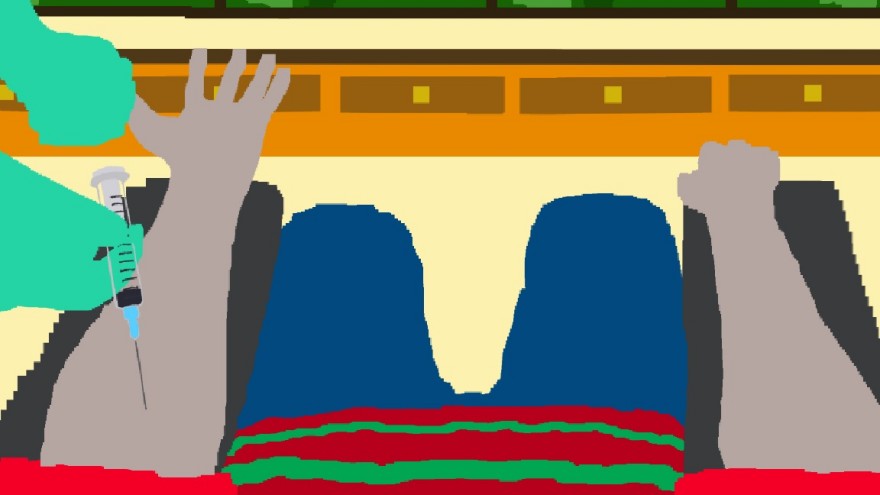 Pardon me, but let’s start this out with a personal question: Have you been tested for HIV? If you’re aged between 13 and 64 years old then it’s recommended by the Centers for Disease Control and Prevention (CDC) that you get tested for it at least once. Time’s a-tickin’.

If you’re a little frightened about your physical health right now, that’s good—it means you want to look after yourself and those around you. Do yourself one better and check out I’m Positive—it should prove more persuasive than I, being a free interactive narrative about a guy called Tim as he contracts, gets tested for, and lives with HIV.

my parents had the idea—as with many others—that HIV and AIDS was a “gay disease.”

The mini-games have you subscribe to the necessary actions in the process of being diagnosed with HIV. You swab your lower and upper gums to get the results from a personal testing kit. You have blood drawn from your arm at the clinic (and can choose to see the needle penetrate the skin, or stare out the window). Afterwards, you go through the daily ritual of taking a pill to keep HIV down so that it doesn’t develop into AIDS.

But the most effective part of the game for me is delivered in its passages of texts. These are conversations with the nurse at the clinic, whom you can ask questions about HIV and AIDS: how you might have contracted it, what it does to your body, the many stigmas surrounding it that prevent people from getting tested, and the medication required to keep it at bay. Just being able to ask someone these questions and get knowledgeable answers without judgement was, for me, a relief and an eye-opener.

While growing up, my parents had the idea—as with many others—that HIV and AIDS was a “gay disease.” And they passed this idea on to me (it’s not, of course; we’re all at risk). The difference was that they’re heterosexual and I’m pansexual. I had always suspected that I wasn’t straight, and so this belief held by my parents had manifested in my mind as something horrific lingering over my secret. I feared that if I had committed to a gay relationship of any kind that I’d immediately contract the disease. Likewise, if I decided to be tested for HIV, then I feared that the decision would out my sexuality before I was ready.

That’s all in the past for me now, it exists only as a teenager’s many qualms with the world, but I’ve no doubt that there are others out there right now with the same mindset as I had. And so the importance of I’m Positive as an accessible conduit for relieving these fears, and educating people, cannot be understated in my eyes. And the team that made it seem to think the same way.

“We want to encourage people to get tested, reduce the stigma, and increase knowledge about HIV,” they write on the game’s website. It also reveals there that I’m Positive was originally created for the CDC & Games for Health Game Jam 2014, and was selected as one of the top five winners. Further, it will be tested by the CDC for its efficacy some time in 2015. So, perhaps we could see it being used as an official tool used to educate hundreds if not thousands of people about HIV in the future.

It’s done its job for me, at least. I’m getting myself down to a clinic as soon as possible, still slightly nervous, but much more at ease with the whole process of being tested for HIV. And all thanks to a videogame, of all things.