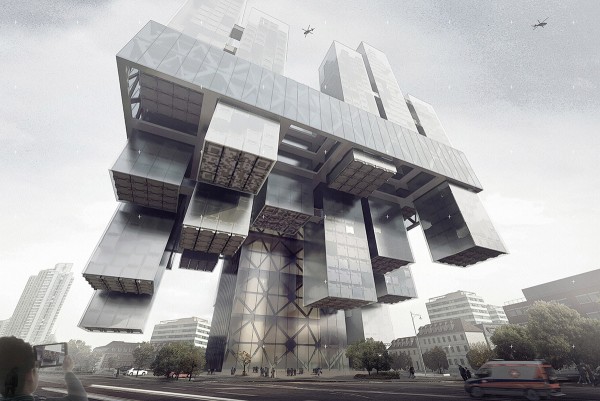 An architecture journal announces a competition to design hypothetical skyscrapers. Anyone can enter. 489 teams do. What could possibly go wrong? Here, then, are the 3 winners and 21 honorable mentions from eVolo’s 2016 Skyscraper Competition. One might even argue that it’s a glowing success.

Sure, the winner of this skyscraper competition, Yitan Sun and Jianshi Wu’s “New York Horizon” is actually a subterranean structure, but who among us could possibly get hung up on such ontological pedantry?

And sure, “New York Horizon” would create new and exciting public spaces by dropping Central Park below street level thereby making it all but impossible to just walk right in, but just think about the extra square footage (80 times more than the Empire State Building) and rock climbing opportunities! Oh, and whatever you do, don’t think of what’ll happen when sea levels rise. So much not to think about.

What’s a skyscraper anyhow? If your architectural sensibilities have been weaned on city- or tower-building games like the upcoming Block’hood, you might just say it’s a stack of things—boxes that perform discrete functions—and call it a day. That rhetorical shrug, it should be noted, is basically a Bjarke Ingels pitch: Here are all these functions that have been stacked in an interesting manner, and maybe twisted a bit.

Up to a point, this truism is…well…true. All buildings are, in a sense, stacks of things that eventually take on some larger form. Therein lies the appeal of Lego architecture, or its Minecraft (2011) equivalent, or even the venerable city-building game; there is meaning and beauty in artful stacking. There is, moreover, more to architecture than this stacking metaphor, which is why videogame architecture isn’t exactly the real world.

And yet, look at this and try to say it doesn’t feel videogamey:

Look at Paolo Venturella and Cosimo Scotucci’s honorable mention “Global Cooling Skyscraper” and try not to notice that it could be drawn from Simon Stålenhag’s Tales from the Loop:

A skyscraper is just a stack of things, so let’s just call it a day.