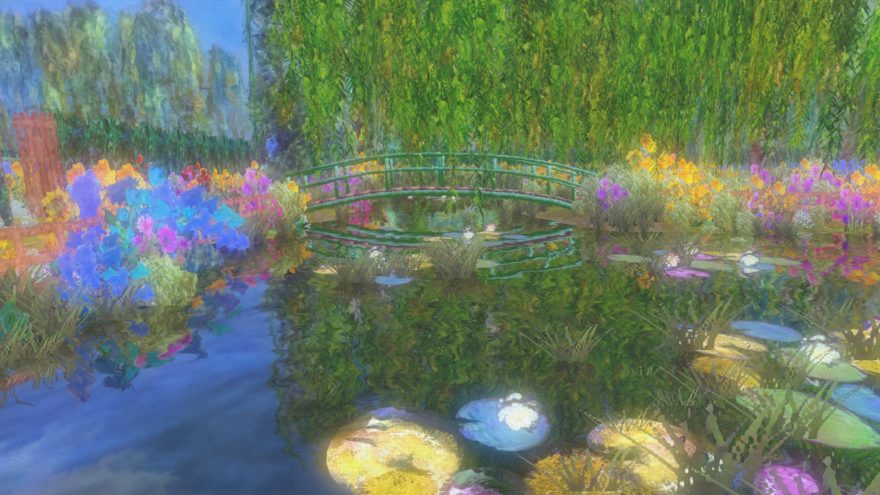 Plenty of games have toyed with the convention of going inside paintings—Oblivion (2006), Super Mario 64 (1996), and Dark Souls (2011) to name a few. But only a handful of games have been made with the sole purpose of perusing artwork from the inside out. IMPRESSIONISTa, a new exploration game from Gigoia Studios (whose games, in fact, all share this theme), is one of them.

perusing artwork from the inside out

The game transports you from a sterile gallery straight into Giverny, where most of Monet’s paintings were made. Specifically, IMPRESSIONISTa mimics the style and color palette of “Water Lilies”—arguably Monet’s most famous work.

Unfortunately, the game’s attempt to create a more vibrant feel by brightening the color palette only cheapens the understated beauty of the painting it was modeled after. And with only a small arena with muddied paths to wander it’s likely that you won’t get much more than 15 minutes of playtime out of it. The concept works but perhaps a few more paintings, or some more areas in the same style, could have been added for exploration’s sake.


This isn’t Gigoia Studios’s first stroke at a painting game the previous one was a more substantial and faithful wander around inside Giorgio de Chirico’s paintings called SURREALISTa. It seems that the studio isn’t stopping with just these two, either. The plan is to augment future works with VR support, hopefully creating a more immersive experience to match the studio’s ambitious ideas.

Until then, I’d suggest the film Loving Vincent as a better impressionist use of time and paint. Or, better yet, take the eight dollars it takes to purchase IMPRESSIONISTa and go to an art gallery. If you’re lucky, you might get transported to a better painting for free.

Oversaturate yourself with IMPRESSIONISTa here.