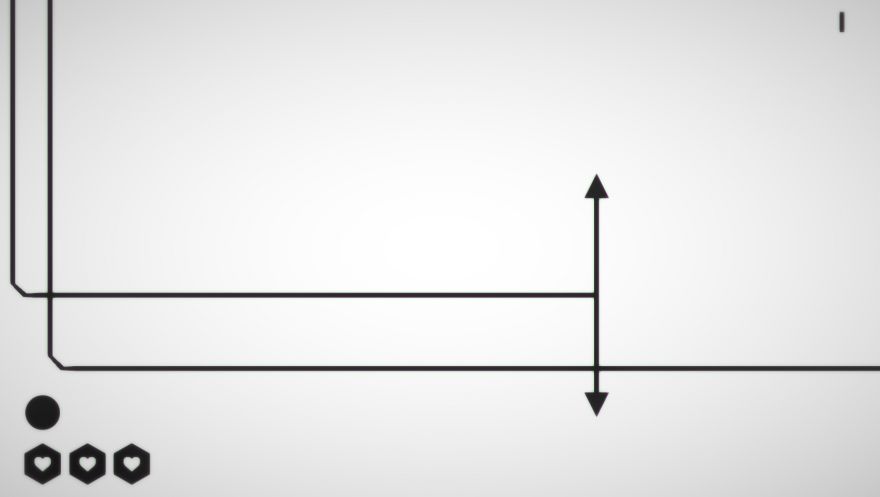 It’s a chicken and egg problem, and one with deep roots in videogaming history. And we’ll get to that, I promise. But first: some words about Line/Dash.

Created by Davide A. Fiandra, Line/Dash is a minimally modernized arcade game. Blocks float across the screen rom right-to-left. Your job is to intercept them before they exit stage-left. This is done by launching lines in their direction. At the click of a key, a line starts working its way downwards. At the click of another key, said line branches off to intercept the incoming block—or at least it does if everything is lined up correctly. Easier said than done.

Supposing, however, that the interception has been successful, that line can then branch off into two vertical and then horizontal stems to intercept another oncoming block. On and on it goes until one block escapes your linear reach. Your score is recorded. Play again.

This may not sound like much, but Line/Dash is profoundly addictive. Its lines and blocks collide with a pleasing thud. The whole screen shakes. What starts as a black-and-white color scheme gradually expands to neon shades on alternating black-or-white backgrounds. The game rewards reflexes with linear tableaus. A good round produces a score, sure, but also something that resembles a demented subway map.

Fiandra says the game “doubles as a procedural player-controlled multimedia sculpture,” which, insofar as all games can be art, is probably defensible. The underlying premise holds even if the ultimate conclusion is a bit of a reach. Still, a static image of Line/Dash does raise an important interpretive question: Are the lines barriers or live actors?


This question dates back to Snake, the arcade/early cellphone/graphic calculator-game, in which a line (umm, well) snaked around to gobble up dots and progressively grew longer. As this line extended, it began to serve double duty as a barrier. Snake, at the highest level, asked whether a maze, by dint of being self-made, could also be a maze runner? Line/Dash, with its similarities to Snake, doesn’t so much answer this question as it mines it for artistic inspiration. At any given moment, you may be building the maze or trying to navigate it. Insofar as that’s an interpretive challenge—and a fun one to solve at that—Fiandra’s claims about multimedia sculpture may not be so far off the mark.

You can purchase Line/Dash on itch.io and Google Play.