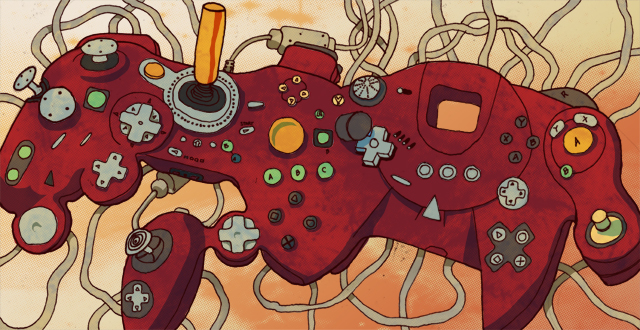 This piece originally ran last year, but fresh off E3, it made sense to look at some of the failed game projects of yesteryear to inform our future. If anything, there will be bow and arrows.

Dave Carter has a particular interest in odd controllers. During my tour of his collection, he pointed out a Taiko Drum Master and made sure to show off the acquisition of Capcom’s Steel Battalion. (Later, I’d play the mech simulator for the original Xbox. The game’s controller, a spate of nozzles, levers, switches, and pedals, is more 747 cockpit than DualShock. Moving forward is a cause for celebration. It’s a singular experience.) Then he picked up a doll, the spine of which opens up like a hand puppet’s. This is the input device for Majesco’s Babysitting Mama. “You put the Wii Remote in there and rock the baby,” he explains. “Fantastic.”

Four years ago, a faculty member in the Art department at the University of Michigan mentioned to a fellow librarian that they should do something with videogames. Carter wrote a paragraph explaining why, and sent it to his supervisor. “That’s interesting,” they wrote back. “Tell us more.” Carter’s three-page proposal was quickly accepted, and the Computer and Video Game Archive opened in 2008.

Today, Michigan is joined by a growing number of institutions—Stanford, University of Texas at Austin, and SUNY among them—devoting resources to games as a medium of study. I met Carter in the basement of the Art, Architecture and Engineering Library in the Duderstadt Center, or as students call it, “The Dude.”

How did the archive get started?

The mission of the library is to support the teaching and research interests of the faculty and students here at the university. Lo and behold, there are faculty making use of videogames in all sorts of different ways, in different departments. From teaching about programming, from studying them as part of the culture, to looking at sociology.

We made the case, “Hey, there’s people out here [teaching with games]. We should do something about it.”

What we proposed is pretty much what we ended up having here. Not only do we collect the games, but we let people come in and use the games. We’re different from a traditional archive. They lock everything away, in a vault, and you have to prove your worthiness in order to come in and handle the stuff. We did not take that approach to this. We wanted what I call a usable archive, where people could come in and use the stuff, just like they would come in and look at a book on the shelf.

A library wouldn’t be very productive if you could just look at the books from afar.

You know, that’s how libraries were in the old, old, old days, where everything was locked away in closed stacks. And you’d come up and ask to see a book, and they’d go and fetch it for you. That’s how archives typically go. We decided we wanted people to come and use the stuff.  Because a) I want people to be able to use the stuff, and b) to let people know that we’re here.

So that when it comes time for them to work on a project for a class or come up with a paper topic, in the back of their minds there’s this, “Hey! There’s all this videogame stuff on North Campus. Maybe I can somehow fold that into what I’m doing.”

Your space is only a few years old. Have many students found the archive and used it as a resource?

Frankly, most of our use right now is recreational. Especially in the summer; there’s not much going on. In the fall and winter terms, it’s maybe 80- to 85-percent recreational. The other is actual study. Which is fine. Obviously I want more of the academic use of the place. [Laughs] I know that’s going to be a slow build we sort of have to work on, do more outreach. But if it gives the kids a break from cramming the books so long, that’s fine, too. Sometimes you just need to take a break from nuclear engineering. Come in here and shoot at the red team.

What are your thoughts on an archive as collection of otherwise disposable objects? To build this library of things that otherwise might just dissolve in landfills… Is that a goal, too? To preserve?

Yes. What we’re after here is preserving the experience of playing games. And the way in which we do that is keeping the stuff, the original equipment as much as possible. The old television sets and things like that, so people can play them. Because it’s not the same if it’s not on that curved screen.

A lot of HDTVs, you hook an old console into them…

It’s not the same. We’ve done that on occasion—taken stuff on the road, and plugged it into the widescreen. It’s okay. You can do that, but … it doesn’t look the same, doesn’t feel the same.

“It doesn’t always have to be, ‘Let’s look at this wonderful, gorgeous, beautiful game.’ Yes, look at those. But also look at the mistakes.”

Are you a gamer yourself? Is this more of an academic project of yours? Or a personal, passion project?

I’m more of a casual gamer. Back in my youth, I’d spend hours in the basement on the Atari 2600. Go to the arcades. Now, I play games occasionally. I have a PS3 at home, which frankly gets used more for Blu-rays than it does for games, although games do occasionally get played on it. I’m more likely to play a game on my iPad than I am on a console, ’cause it’s right there. It’s simple.

You recently got in the Philips CD-i, and you mentioned how bad it is. And yet you seem pretty enthusiastic.

Oh, I love bad game systems! I think you can learn just as much about game design from seeing all the bad stuff as you can by looking at the good stuff. There’s a good research paper right in there: Why are those Zelda games for the CD-i so bad? What is it—about the gameplay, about the controller, about the system, whatever—that made it completely unsuited for trying to do that sort of game? It doesn’t always have to be, “Let’s look at this wonderful, gorgeous, beautiful game.” Yes, look at those. But also look at the mistakes.

So as not to make them again. Or just to poke into a little strange nook of…

Of history. Plenty of people have Super Mario Bros. Everybody’s played it. Everyone goes, “Oh, it’s fun to play again.” There’s plenty of those Nintendo games that nobody played, because they were bad. They didn’t sell well. Why are you going to spend your money on something that isn’t fun? But it’s still part of the history of the medium.

That’s the kind of stuff I’m more worried about losing than the popular stuff. We’ll always be able to grab another copy of Mario Bros. Everyone’s got a Nintendo in their basement. We’ll be getting those in for years to come. But CD-i machines didn’t sell well. There weren’t that many of them. They’re notoriously fickle and tended to break. So getting one of those that works was pretty good.

Are there any other bad games that exemplify that sort of philosophy?

The controllers for the Atari 7800 are just miserable. Just trying to hold those things while playing… You’ve got the joystick that was also a knob controller. You have the two buttons on the side. After about five minutes, your hand gets so tired. It’s not a natural way to hold things.

That’s one area where games have really improved in the last 20 years. They’re designed so you can hold them for hours at a time.

I was disappointed in the PlayStation Move. I thought it was too accurate. And it is. It’s much more accurate than the Wii. It’s got the light sensor, and the gyroscope, and whatnot. But it was hard to just pick it up—like their sports game [Sports Champions]. Playing the archery game, it was really sensitive to how you were holding the wand. And for picking up and doing casual gaming with it, I think they missed the mark. Whereas the Wii is just not as sensitive and not as accurate. So you don’t need to be accurate.

Since we aren’t all good sportsmen. We want to pretend.

If you would like to donate your mistakes to the Computer and Video Game Archive, get in touch.