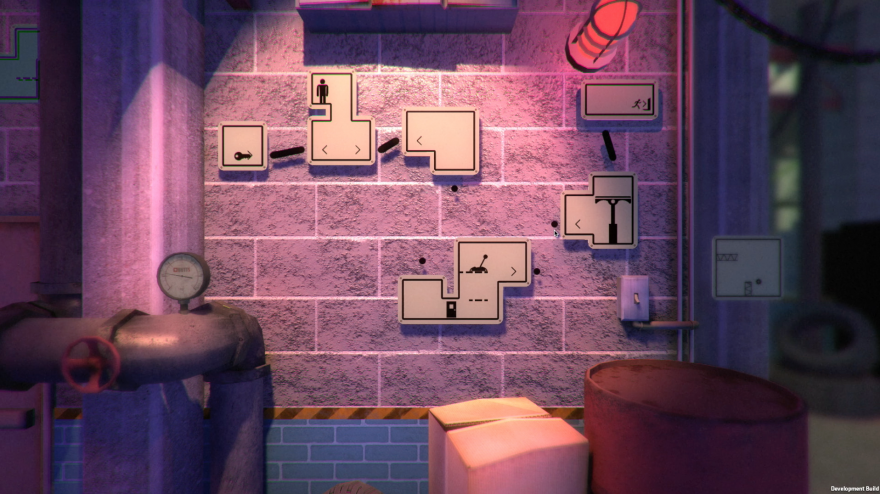 The genericized male figure has escaped his perch on the bathroom sign and soon his female counterpart in the gender binary shall do the same. That’s not bad as a political statement, but how does it fare as a game?


The Pedestrian, which developers Skookum Arts have slated for a mid-2016 release, turns this timely premise into an adventure game. The male figure is not running off, Man of La Mancha-style, to break down the gender binary; no, he’s out to rescue the object of his affections, the female bathroom figure. He travels the only way he knows how: through signs. The Pedestrian’s navigation-based puzzles take place in the built world, but its character can only move through signage. The player repositions signs, draws on them, and directs the male symbol so he can reach his goal. Each of these signs becomes a discrete puzzle, and they all add up to a quasi-sidescroller suspended on the walls of a building.

It’s all pretty meta. The Pedestrian is, after all, a game about wayfinding that takes place within wayfinding implements. It does, however, make a good deal of sense to proceed from the assumption that signage systems have inner lives. A sign that can’t decide where it points or what it means—a fate that is annoyingly common—is effectively experiencing an existential crisis. The Pedestrian literalizes that scenario. The signage in this world needs to figure itself out, and until it does it won’t be handing out advice.

You can keep track of The Pedestrian during its development on its website.