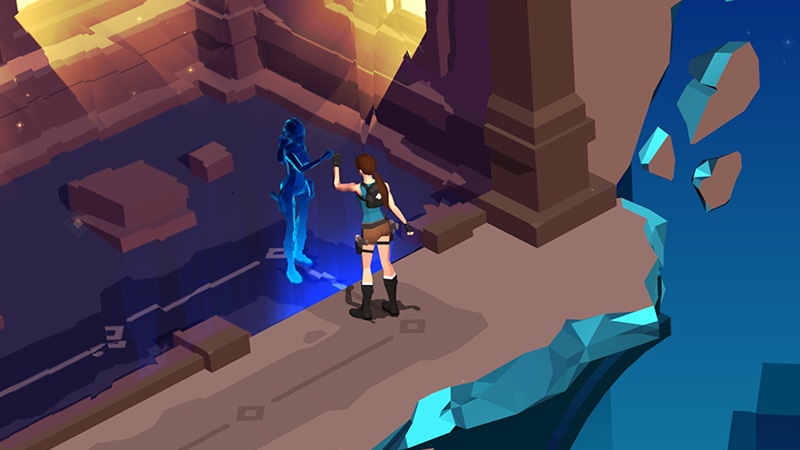 Lara Croft GO came out for PlayStation 4 and PlayStation Vita on December 3rd this year and brought with it a time-exclusive set of levels. Called “Mirror of Spirits,” these levels take the grid-based puzzles of the game’s dioramas in a radically new direction than the main levels and the first expansion, “The Shard of Life.” Whereas before Lara was dodge-rolling through jungle and underground caverns, concerned with the paths of rolling boulders and pursuing lizards, in “Mirror of Spirits” she enters a new reality through the titular mirror, where a completely new set of rules change the makeup of the game.

The reason why these levels are so different than the others is easily explained: they weren’t created by the original team at Square Enix Montreal. They’re the work of another Montreal studio, KO_OP Mode, the makers of upcoming puzzle game GNOG, which will have you spinning monster heads to explore the tiny worlds inside them next year. It was Antoine Routon, the co-creator of Hitman GO and Lara Croft GO, that first saw GNOG (at PAX East, apparently) and reached out to Saleem Dabbous of KO_OP Mode to arrange a meeting.

“We thought it was unusual, but decided to meet over a drink to see what they wanted,” Bronson Zgeb of KO_OP Mode, and the puzzle designer of “Mirror of Spirits” told me. “As it turns out, Antoine had seen our game GNOG and recognized that our approach to making this small handcrafted ’boutique’ game aligned with their own approach while making the GO games. At that point the more we talked, the more we realized the similarities between our two companies. To me it feels like one of the only difference[s] between our design philosophies is the scale at which we’re operating at. ”


Accepting the offer to create a level pack for Lara Croft GO, the team at KO_OP Mode started to explore as many wild ideas as they could come up with, being as it were that Square Enix Montreal had given them full creative freedom. “In the end I think our tight timeline had a bigger role than Square Enix Montreal did dictating what we could do,” Bronson said. There was, however, one request, and that was that the new levels somehow tied into the 20th anniversary of Tomb Raider.

“I think we all had fond memories of exploring the original Croft manor, so we used that as our jumping off point for the new content,” said Bronson. “Our new chapter starts with Lara placing a new artifact (the mirror of spirits) in her trophy room. Doing so causes a chain reaction in which the mirror shatters, which effectively shatters reality along with it. Lara’s spirit separates from her body and runs off. The story then revolves around Lara exploring the shattered version of the manor while trying to rejoin her body and her spirit.”

With that as a starting point, Bronson initially began to explore several ideas that he could design puzzles around, but quickly narrowed it down to just a few. His goal was to find puzzle mechanics that didn’t overlap with those in the other Lara Croft GO levels. The first he came up with is, and what features a lot in the first levels of “Mirror of Spirits,” are eyes that appear all over the walls of the manor.

“These act as triggers that go off as soon as anything living walks in front of them, but they can also be blocked by pillars and boulders. They’re essentially push plates that extend to every tile in front of them,” Bronson explained. “After that, I took those same eyes and attached them to pillars. With that, now you have a trigger that you can move around the level, which adds an interesting puzzle layer about positioning your triggers in addition to all the other puzzle solving elements.”

“if one of them dies, they both die”

These eyes make for a number of tricky puzzles that, admittedly, I struggled with. Being able to move the eyes around the levels makes for quite a lot of different possible formations. Trying to find the right one each time certainly tested my resolve. What I enjoyed more while working through “Mirror of Spirits” is the big idea that characterizes the latter parts of the level pack. “The big mechanic that ties into our narrative is the addition of Spirit Lara, who mirrors the player’s moves but on a separate puzzle,” Bronson said. “The way it works is both Laras have to be able to make a move for it to be valid, and if one of them dies, they both die. Later we mix this up even more by allowing both Laras to cross the mirror plane into each other’s world in order to solve puzzles.”

This is good shit. Despite the presence of a second Lara doubling your required perception in each level, these levels don’t feel quite as tough. That’s probably true on a fundamental level, but I’d wager that these puzzles felt more enjoyable to me as they changed the foundations of the game, serving up something genuinely new. You have to think in pairs, but also take this line of thinking further, realizing that not only can Lara cross over into the mirror realm, but so can the animals hunting her. The inclusion of Spirit Lara also feels like a callback to the doppelgänger of the original Tomb Raider, in which an Atlantean Lara (or “Bacon Lara“) did the mirror opposite of your every move inside one room.

These mirror realm levels are some of my favorite puzzles I’ve solved this year, helped along by the extraordinary sound design: shattered glass, warped screams, distant echoes. They feel truly out-of-this-world in their realization. KO_OP Mode attributes this achievement to the creative trust that existed in the partnership with Square Enix Montreal. “Because of the timeline we had to move fast and make design decisions quickly and if that trust didn’t exist, I’m not sure we would have been able to actually ship,” Dabbous said. “And that goes both ways—when we pitched an idea and they let us know why they thought it would or wouldn’t work, we had to trust in their experience too.”

After this positive experience, KO_OP Mode is definitely up for doing more collaborations in the future. But next up for the studio is getting GNOG out in 2017.

You can purchase Lara Croft GO for iOS, Android, Windows Phone, PC, PlayStation 4 and PlayStation Vita. However, only the PlayStation versions have the “Mirror of Spirits” levels until March.