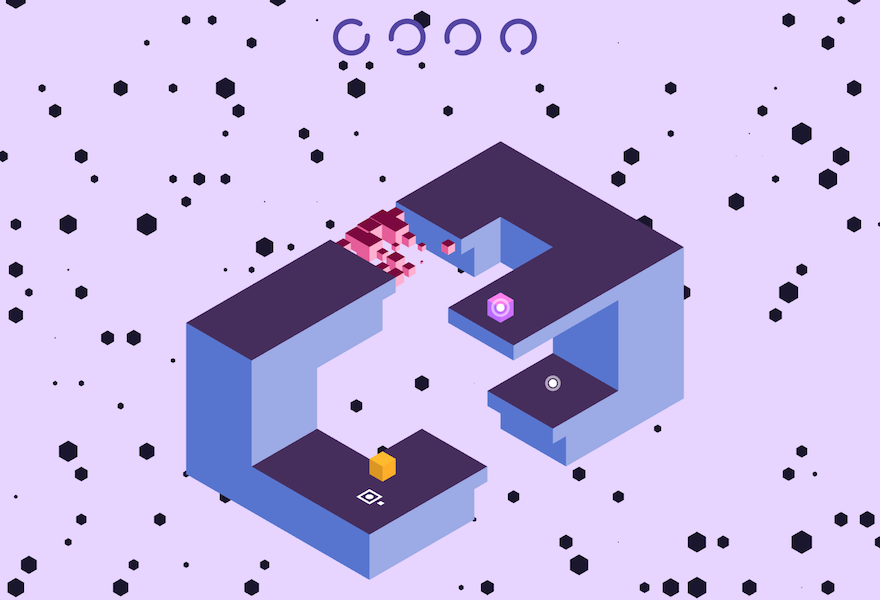 As Robyn testifies, dancing by yourself is the worst. It’s a miracle to find that lockstep tango partner who matches your breath, trustworthy beyond thought to twirl and catch with relative synchrony and grace. Telepathically, it would be ideal to team up with yourself, knowing that you are the only one you can trust. Homer Simpson speaks the truth: “Everyone is stupid except me.” Maddeningly, one of you isn’t enough to cut up the dancefloor.

Induction grants you this otherwise impossible team-up, with isometric puzzles requiring you to waltz with the best of the best: your time-looped past selves. Visually similar to Edge, you control a rotating cube navigating Monument Valley-sized Escher drawings. Zipping from A to B is the goal—easily requested but difficult to deliver without soon learning to rewind time and sashay with yourself to cross bridges, flip switches, and manipulate various other puzzle fare.

Developer Bryan Gale describes Induction’s approach to time-shifting that sets it apart from similar games: “When I introduce the mechanic that lets you take direct control of a past self, and lets you solve chicken-and-egg style puzzles—like you’ll need to reach a switch to open a bridge, but you’ll need to open the bridge to reach the switch—that’s when people who’ve played similar games go, ‘Oh.’” The subtle “oh” of a brain shutting down for a moment, awash in in the paradox of swing-dancing as both the chicken and the egg at the same time.

It’s a game of orchestrated dance rather than time-travel, as Gale doesn’t really cotton to that term: “For me [“time-travel”] sounds corny and conjures images of bad ‘70s sci-fi, so I definitely didn’t want to use that in game.” In fact, Induction doesn’t use much in the way of language, instead opting to present the use of its interweaving timelines visually. “I want the game to feel like it’s taking place is some kind of platonic realm. If I had the game talk to you in familiar, everyday language, I’d lose that. And that’s behind a lot of my UI decisions; I’m using intentionally unfamiliar symbols, and rejecting a lot of the easy options for communicating with the player.”

It’s a game of orchestrated dance

This approach works, albeit with the expected mental tangles. You need to cross a gap, and to do so you have raise a bridge by hitting a switch on the other side. Or once on that side you can’t get back, but now you have to hit a different switch you left behind to go forward now. What appears to be your second step is actually your first, as you have to mime it out before you leave the relevant area. Then you summon your past self and race to the bridge that you just opened so that you can cross it, hoping that the other you left you enough time to pirouette across.

Thus, Gale’s reluctance to rely on language: these concepts are more easily conveyed visually or through play. When asked about the benefits of framing these time-loops without language in the game, Gale says “I like the reaction I’ve had from players, telling me they understand what’s happening but can’t quite verbalize it. I find it very cool to be communicating with players in that way. And it’s been fun hearing the vocabulary players have come up with trying to explain what’s happening. Like having someone say to me ‘I think I need to push this pipe to give it to my ghost,’ and I’m left going, ‘Wait what? Pipe? Ghost?’”

Working with your dance partner (“ghost,” “old cube,” “green guy,” or how about “chrono-doppelganger”) results in a cascade of consequences and brow-knitting paradoxes. You don’t need to understand the specifics, you just need to make it work. But that doesn’t mean Gale isn’t attempting to remain theoretically provident: “I am borrowing an idea from quantum mechanics—that there are infinitely many different worlds where all possible things occur, and what we see is in some sense the ‘average’ of all these possible worlds. In Induction, I see there being an infinitely many timelines—if in timeline A you jump back in time, you reach timeline B, but that timeline contains a version of yourself that will jump to timeline C, which contains a version of yourself that will jump to timeline D, and so on. To solve a puzzle, you need to create a solution that has you succeeding in all these infinite possible timelines, as that’s how you guarantee that you succeed in the ‘average’ timeline.”

Gale’s own description of this teamwork with one’s self is choreography. You are surveying the landscape, planning for moves to be made ahead while you’re still lacing up your dancing shoes, and discovering the different ways to assist yourself. Gale outlines his ultimate quantum-rhythmic goal: “With the weaving of your different selves, I want finding the solution to feel like you’re jump-starting some kind of intricate perpetual motion machine. Right now when you complete each puzzle you’re just kicked back to the level select, but I want to change that to let the player see that they’ve effectively pushed the first domino that triggers these intertwining actions up through an infinity of timelines.” Tapping through this infinity involves some stumbles, a bit of imagination and the odd accidental epiphany, but the result is a mind-bending foxtrot of timelines.