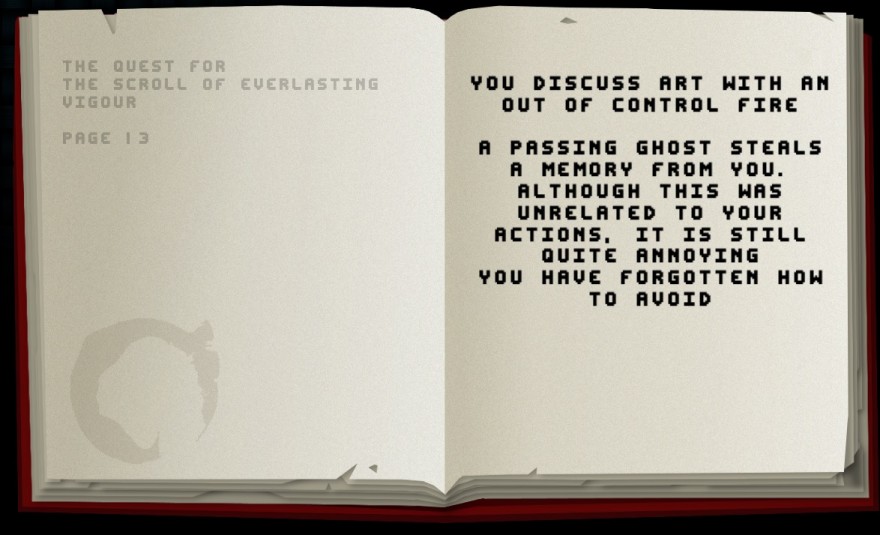 You’ve done it, haven’t you?

Of course you have—you’re a human being, and more than that, one who has the spoils of modern living out to entertain you at every corner. It all became a noise to you at one point, didn’t it? You were lost; tragically you’d say, in the toils of a life yet to be lived. And so you desperately sought a spiritual guide to put you on a path, to give meaning to your actions, to help you break the surface of the humming vacuum of automated sentience you were desperate to escape.

it’s not about the destination at all.

This, yes, this was when you attempted to dissect the famous “Life is a journey, not a destination” quotation in order to apply it to your own existence. But what does that mean? And, more importantly, how can you actually use it to enrich your daily meanderings through the tireless minutiae?

I don’t have the answer. But I do have something to show you. Play Infini-Quest. It’s a procedurally generated text adventure created by Second Dimension Games.

It’ll put you on a journey toward a made-up fantastical item: magic trousers, a monumental sword, or maybe an idolized glove. This item represents the end of your destination, the reason for you to head out on a journey; to seek it out and retrieve it. But it’s meaningless, and the fact that this item is randomly generated with each new game draws attention to this.

If you play with intent, trying desperately to survive to the end of the journey and get to your magical item as quick and safely as possible, skimming across each of its pages by travelling through the exit straight away, you will have no fun. And at that point, the quotation you dissected previously will start to unfold—you’ll realize that it’s not about the destination at all.

find the bizarre humor in the randomly generated interactions

What you’ll realize after beating Infini-Quest the first time is that the fun of the game is found in dwelling on each moment of the journey. On the left of the screen, you’re given items, weapons, actions, dialogue options, and skills to use at each leg of the journey. While on the right are icons representing the features of your current environment: a blackberry bush, an abandoned house, an angry duchess, perhaps an ancient scroll.

What you should do, then, is take the time to find the bizarre humor in the randomly generated interactions that occur when you combine the concepts on the left page with the features on the right. Drag a “brick” over to an “abandoned gallery” to be told that you did it maniacally, and the result was a trail of destruction—the gallery being vanquished by the interaction. Do as I have done, and as others have also shown me with pictures, and lick cats, cast demons to battle lazy bees, discuss impressionism with brick walls, and show concern for a beautiful flower.

Yeah, you’ll lose options along the way, while also gaining new skills and weapons at times. It doesn’t matter what you do, as long as you do something, and that you get an anecdote out of it. As it’s these unexpected interactions, incited by your actions, that make Infini-Quest worth playing. And, dare I say, it’s the same with life. It’s an amusing, weird, and terrifying game at times, but all of its sentences are procedurally generated, and so it’s only you who brings meaning and emotion to each happening. That’s the important bit.

Perhaps you can take something away from this and apply it to your existence in meat space, outside of the game. Maybe you should delight on those small moments that treat you well or astonish you, focusing on how they make you feel, and stop worrying about where you’re going and how you’ll get there. Instead, and this is only a suggestion, try to actively and constantly put two things together, commit to an action, and see what it results in. It may surprise you.

You can play Infini-Quest for free right here.