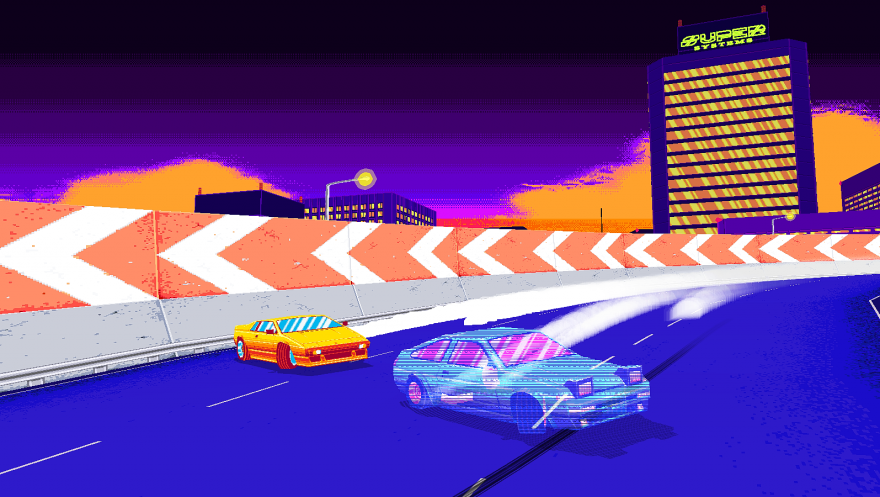 Growing up with diecast cars and car carpet city, there were two main camps: Hot Wheels and Matchbox. Matchbox represented something to appreciate from afar—nice details but not built to throw in a racing track. The raging colours and tough builds of Hot Wheels, on the other hand, screamed, “I want to go sideways!”

I’ve been getting familiar with the sharp turns of this metropolis, having spent the last few hours sliding, often into walls, through an urban circuit in a bright orange car called the Bulldog.

“Eventually I just released all the content from Turbo Run for free, and that’s when Chase [Pettit] ended up picking it up,” Blanchard said. After a brief Twitter chat midway through 2014, they decided to work together.

“It pretty much came together out of nowhere,” Pettit, the game’s programmer, said. “I kind of on a whim, just on a weekend, thought, ‘I really miss arcade racing games.’”

Much like the Ferrari Testarossa of Out Run or the titular vehicle of Lotus Esprit Turbo Challenge, the design of the Bulldog hoists that mantle of an iconic 80’s two-door coupé. Drift‘s team, going by the name Super Systems Softworks, sets the stage for an 80’s piston-lust homage with poise.

While the 80’s retro aesthetic has seen a bit of a resurgence, the state of the arcade racing genre has decidedly not, as much more realistic racing games have taken the spotlight in recent years. Yet, much like Vektor: The Courier’s pitch-perfect evocation of the dystopian vibes of Akira, Drift Stage brings the arcade racer back to its pre-millennial beginnings with a modern polish.

Music lead Hugh Myrone came to the project in a manner as happenstance as Blanchard and Pettit did—by stumbling onto GIFs of the game’s art on Tumblr. Following the reblogs lead him to Blanchard’s original post, and he inquired about making the music.

“I tweeted at both you guys, and you guys were like, ‘Yeah, I guess this guy could make the music,’” Myrone said.

Super Systems’ more difficult target ghosts always seemed a step ahead further than me, cutting effortless lines while I narrowly avoided hitting the walls with my rear end. My attempts to keep up with the “expert” ghost were often in vain.

I imagined the panels of Initial D‘s Takumi Fujiwara sliding down Mount Akina in his Toyota AE86 Sprinter Trueno, struggling to make a pass until he hits a bump and sends his car sideways.

Drift Stage has just been launched on Kickstarter. Otherwise, you can check it out via the available technical alpha or on Steam.