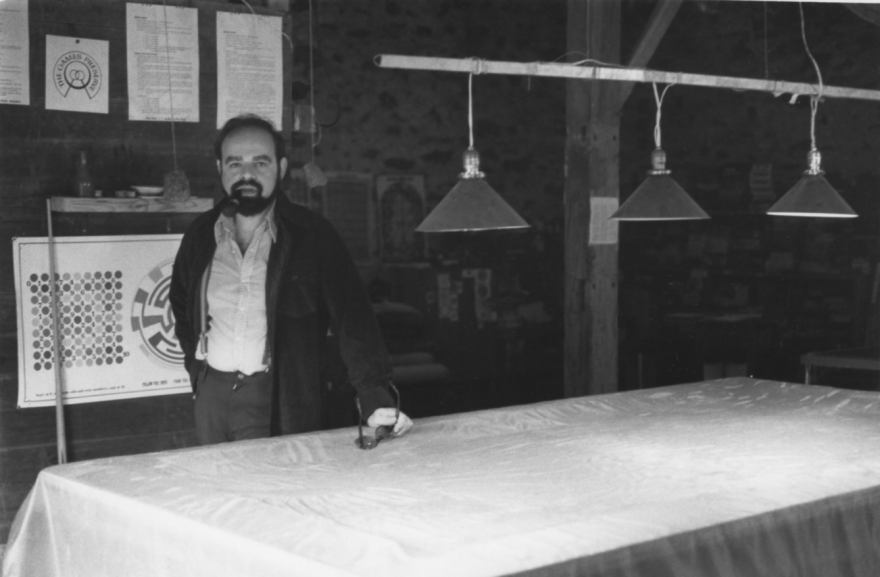 The fun theorist Bernie De Koven, whose influential book The Well-Played Game was recently reissued by MIT Press, introduces himself as a visionary of the New Games Movement, a playful crusade that grew out of ‘60s counterculture, when free love, sustainable living, and psychedelic bus murals were the spirit of the time. It was in the aftermath of that era when he founded his Games Preserve on a farm in rural northeastern Pennsylvania. That stretch of farmland was to become an utopian society founded on the ideals of good play—a commune and art colony that opened its gates to any person and every game. This is his story, as he told it to me.

There’s a guy named Stewart Brand, who was a member of the Merry Pranksters. He wanted to create an event that—this was in the time of Vietnam—was an alternative form of demonstration. [1] Not a sit-in, but a “play-in,” where a bunch of people got together to play games. He got the idea from military training programs—these fairly violent exercises the military was doing. [2] He called it “soft war.” That’s how things got started. [3]

We wound up with maybe a thousand different board and table games and puzzles.

I had an organization that I called the Games Preserve. It was on a fourteen-acre farm. Later, we expanded it to twenty-five acres. We bought it in ’71. We weren’t interested in raising animals. We were interested in creating a retreat to further the study of play. There was a big barn full of games that people would send to us. We wound up with maybe a thousand different board and table games and puzzles. It was kind of like an open toy store. We had so many different games: Pinball and pool and box hockey. Traditional wooden games. Skittles. Ping pong. Air hockey. Sliding boards. We painted a whole wall of the barn so we could play blackboard games. There was a library full of books on games. Each game embraces a slightly different mode of play. It really made you think about the art of play.

I’d do workshops. At that time I called them play-shops. We had all kinds of people, from youth groups, to scholars, to local prison officials who were interested in correcting the animosity between the guards and the prisoners, because the guards were too oppressive. There were couples interested in personal growth. And individuals who believed that play was really important: “Maybe fun is something I need to be pursuing in life, instead of aggression.”

We had a big sign in front of our place that just said “yes.” We had a sign calling it the Games Preserve, but hunters kept coming up and wanting to shoot something. People had to sleep on thin mattresses in the barn, or they could pitch tents in the woods or in the fields, or they would come inside the house. That’s where the only kitchen was. We’d make meals together. We’d move games into the house.

We started playing with biofeedback. More spiritual, reflective ways of playing. There was a local artist who made these beautiful metal sculptures—these vertical rods embedded in metal. If you brushed against them they’d make this beautiful chiming sound. We also had flying rings. A dancer came over and she started swinging the rings with her body and they’d touch the sculpture and they’d chime. She’d be moving to the sound. It was that kind of environment.

We never made any money. This was not a profitable enterprise.

We never made any money. This was not a profitable enterprise. It was basically a skin-of-your-teeth survival thing. Groups would leave behind some of their food. Some of them were given food by the government. We’d get a twenty pound box of SPAM. Peanut butter, or dried eggs. Sometimes, people actually paid us. We went on like this for ten years, from ’71 till ’81. By ’81, we were flat broke. I took all the money in our penny jar, and managed to get just enough for a one-way trip to California. I was absolutely convinced that my next step was to be a designer of computer games.

I didn’t get a job with Atari as I had hoped. I got a job with a small company called Automated Simulations. I was not a programmer. I was a designer—one of the few in the industry at that time. Since no one really knew what a computer game was supposed to be, I got to create some outlandish games. My second game was Alien Garden. Later on, they called it the first art game. Jaron Lanier was my programmer. He was my programmer! You could sense his artistry, but he was very uh, different. He was the archetypical person that you’d call an artist. He had all kinds of musical instruments. He was very unearthly. It was difficult to develop an easy-going relationship with him.

I went on and worked with Children’s Television Workshop and C.B.S. Software. Eventually, I gave up on videogames. As more money came into it, people became closed to experimenting with different ways of playing. You couldn’t design a game iteratively. You had to have a game document. Every aspect was worked out before it got programmed. Things got a lot less playful.

This was around 1983. [4] At that time, the New Games Foundation was doing programs all over the world. We were renting out equipment, including the Earth Ball, this big six-foot diameter rubber ball. It had the world painted on it. It was very symbolic and powerful and fun to play with. We would rent them out or sell them to people. A college had rented it. They were doing a freshman orientation or something. There was a paper that said to never leave the Earth Ball unattended. Never. You can get hurt on it. But they left it outside. Some kid climbed the fence and tried to stand on the Earth Ball and he fell down and became a paraplegic. He sued the foundation. That pretty much was the catalyst for its demise. Very sad. That’s what happened to New Games.

[1] “Playing in public in itself is a political act, especially in hard times. To get people together of different ages and cultures and languages, and have them all enjoy each other and play games, is so different from what was going on at the time. The hippies were protesting. The government was cracking down. The military was attacking its own civilians. There was racial unrest.”

[2] One of these games was similar to the Joust event from American Gladiator, where two gladiators would use padded clubs to knock each other from their podiums. Another involved a cage ball, a large metal sphere which two teams would push against each other on a field.

[3] The first New Games Movement event was organized by Pat Farrington. It took place in 1973 at Gerbode Preserve in the Marin Headlands, just north of San Francisco across the Golden Gate Bridge.