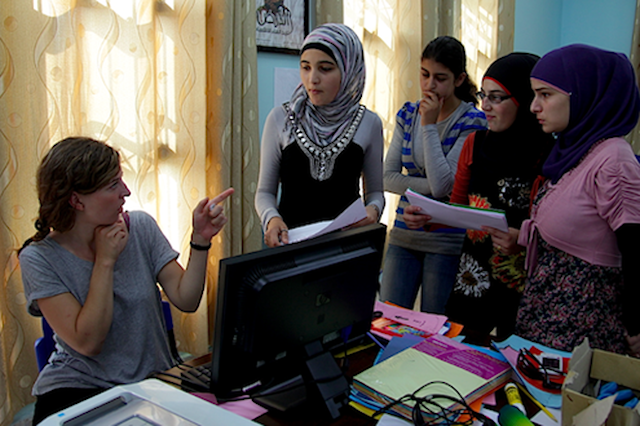 The objective of Find Me is familiar: the player is tasked with finding a unique character in a crowd of faces. But then the ghostly drones of the game’s score kicks in, wisps of lo-fi murk, haunting and nostalgic. A frowning, tear-stained face greets the player at the start screen. This is not Where’s Waldo. The six Palestinian teenagers who made the game all agreed: Find Me is about someone who is deeply lost.

Find Me was the end result of a July gaming course for teenage girls in Anabta, a town in the north of the West Bank. The event was part of the Game Girl Workshop, a program created by two Danes, Nevin Erönde, a sound engineer, and Andrea Hasselager, a copywriter and interactive designer. The idea emerged at the Nordic Game Conference in 2010, where the subject was The Emerging Arabic Market.

“In a place like Palestine, the gender roles are very specific,” Erönde says. “Women don’t have the same freedoms as men and can be chastised for disobeying certain gender laws.”

Last fall, with the help of ActionAid Denmark, they conducted a mini workshop in Ramallah. At the time, they had a male photographer traveling with them. It became apparent that the girls were reticent and reserved when he was in the room. It was only after the photographer left, Erönde realized, that the girls started to relax and open up.

The games returned again and again to themes of decay and loss.

During the mini-workshop, Erönde and Hasselager played a card game with a small group of 14 and 15 year-olds. Their hope was to support collaboration and teamwork. The women sat in a circle, holding illustrated cards. In turn, they went around the circle and built a story upon the previously laid cards. “Before we started the workshop we wanted to encourage a sense of unity within the woman’s group,” Erönde says. “We wanted them to know that it was a safe environment to express themselves.”

In June and July of this year, the Game Girl Workshop began programs in Anabta, Balata, and Nablus. Erönde stressed that the goal of these workshops was to “demystify” the logic behind game-making. In Balata (Palestine’s largest refugee camp), the women in the workshop knew very little about graphics and audio composition. Using coding-light software like Reason Essentials and Game Maker, the workshop was designed to set the foundation of game-making without intimidating the students.

The games that resulted are expressions of daily life in the Occupied Territories. In Fishman, the player starts on the right and moves left, the opposite of Mario and the direction in which Arabic is read. In GM 3, a young boy attempts to collect pocket watches, as an elderly man tries to grab him. The player has to collect time in order to prolong his youth. In Flower Garden, the player has to gather crops before insects can devour them. The games returned again and again to themes of decay and loss.

“These girls are experimenting,” Erönde says. “What comes out is incredibly raw and pure.”