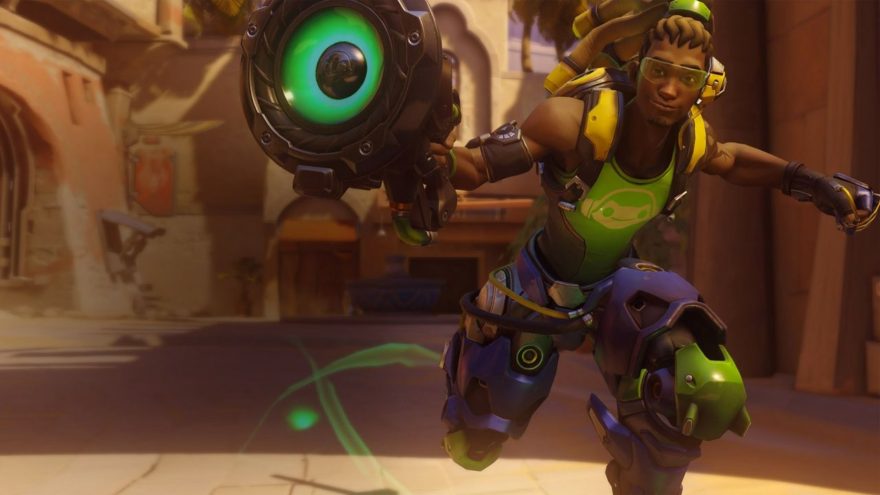 “Look at this team! We’re gonna do great,” Lúcio says, before his team gets crushed at the first point for five minutes straight.

“This payload is bumpin’!” Lúcio says, before he’s yanked off the payload and mauled by a giant wearing a gas mask.

“This is gonna make you feel better,” Lúcio says, adjusting his stereo as his team is annihilated by rockets and bombs.

Lúcio, Overwatch’s skating DJ, is what you’d call an optimist. Like D.Va and Tracer, he’s always peppy. But his own cheerfulness crosses the line into mania. He spins every situation as a positive. After he dies and respawns he says, “Time for an encore!” Nobody else asked him for one—he’s happy to cheer himself on. The experience he’s eager to repeat is getting his ass kicked.

the guy is off in his own little world

He loves to talk about beats, and jams, and “the mix.” Lúcio is like the squeaky-clean hero of a Jet Set Radio (2000) knockoff where everyone’s too scared to deface public property. He’s the police department youth liaison who’s here to talk to you about positive skating. The fact that he’s got a Jet Set Radio-inspired spray is an insult even to the kind of rebellion that’s rated E for Everyone.

Lúcio’s sunny outlook runs exactly counter to your own internal monologue and the running commentary in chat. While you’re thinking “look at this fucking team,” Lucio’s shouting “we’re gonna do great!” Your doomed last-ditch effort to attack the point becomes a “party on the objective!” No matter what kind of bullshit is happening around him, the guy is off in his own little world.

But this is also what’s great about Lúcio. (Who I’ve played, full disclosure, for over 20 hours.) It’s annoying to be on his team, but it’s much more annoying to be on the other team. It’s infuriating to watch him dance in his bubble of idiot optimism, skating just out of reach, knocking people back, shouting about the drop and the hook and the tempo. You’re trapped at a concert put on by a man who only plays two songs and keeps turning the volume up.

It’s not uncommon for Lúcio to outlive his teammates and start hopping forever around the payload or the point, delaying the red team’s final victory. This is what he was born to do. On a map like Nepal: Shrine, Lúcio can often grind around the central pillar for an insufferably long time, toggling between his speed boost and heal, spamming “You gotta believe!” or “Can’t stop, won’t stop!” to make everyone hate him even more. Sometimes he holds out long enough for his team to get back to the point, and they hold out long enough for him to respawn, and then—oh, time for an encore!

Ana – Ana is the protective mother we all want
Mercy – Mercy is the most terrifying character in Overwatch
Symmetra – Go ahead, sleep on Symmetra
Zenyatta – Praise be to Zenyatta, then chill the heck out