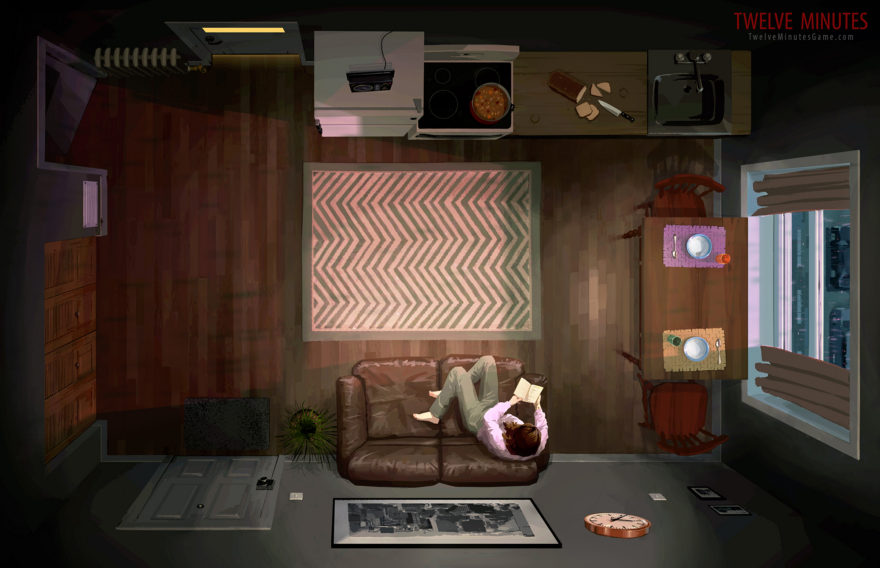 Visual artist Luis Antonio’s been around. He used to work at a couple big name game companies (Rockstar and Ubisoft). But, feeling unfulfilled, he jumped ship to work on Jonathan Blow’s The Witness, a game that incidentally inspired him to learn programming and pursue his own personal project, Twelve Minutes. Twelve Minutes has been in development for around three years, but until now, was merely a passion project, a side activity. But now, that’s all changed: as Antonio’s announced that development of Twelve Minutes has achieved funding, and has become a full-time project.

(A screenshot from the Twelve Minutes prototype)

Twelve Minutes is a top-down adventure game, experimenting with the unwieldy world of time loops. Think Groundhog Day (1993) but with more Stanley Kubrick in the mix. The entire game takes place within a minuscule apartment, as a man relives the same 12 minutes of an evening with his wife, disrupted by a cop barging in and beating them up. Using your knowledge of the situation, you seek to break the time loop and prevent that from happening. “The game doesn’t tell you what to do. It doesn’t tell you what is right or wrong,” Antonio told us at the Game Developer’s Conference this past March. “It’s a lot about discovery, and how you use your knowledge of your given situation and how to use that knowledge to achieve certain outcomes.”

“The game doesn’t tell you what is right or wrong”

The apartment environment is central to Twelve Minutes. The entire game takes place in the small rectangular shaped room, and all the actions, all the characters, everything resides within it. Antonio took inspiration from another notable location: the ominous hotel from The Shining (1980). In Stanley Kubrick’s classic horror, the environment has a life of its own, yet it’s “dream-like and comfortable.” In Twelve Minutes, the apartment is mundane, but with its time-leaping twist, grows more and more unsettling with each rewind. “The goal is to create a ‘lived in’ place, with story, personality and intimacy,” writes Antonio on his recent blog post celebrating the positive news.

In conceptualizing Twelve Minutes, Antonio sought help from sculptor Andrea Blasich (who also lent a helping hand to The Witness). “I wanted to try a different approach for character design,” writes Antonio of the unique project. “Rather than starting with concept art, why not do the exploration in 3D?” Blasich’s sculpture concept is palpably human, but not in a photo-realistic sense—which is exactly what Antonio hopes to be conveyed in the final game.

With funding now in place, Antonio’s goal is to polish the prototype into a fully-fledged game. That means focusing on further developing the animation, writing, character design, and even hiring other people to work on the project. “I want the characters to express their emotions through the ways they move and behave,” writes Antonio in the blog post. “With believable dialogue that doesn’t just read like an exposition dump, but actually expands on the game’s dramatic narrative and reveals each character’s nuanced personality.”

Follow Antonio’s devlog for more updates on Twelve Minutes, with a hopeful release in Q1 of 2017. Reporting contributed by Roy Graham.