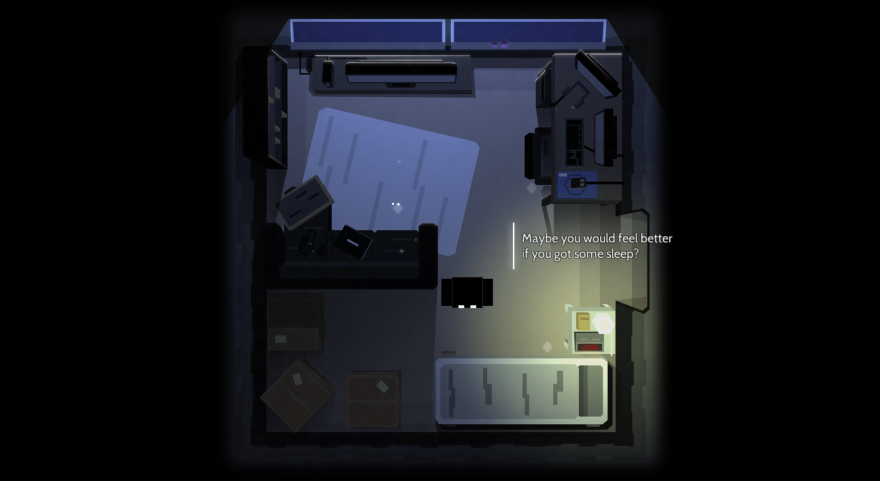 “This could be anyone.”

This is the premise for game designer Michael Levall’s upcoming game, Please Knock on My Door. It’s a choice-driven narrative, with three paths awaiting the player on exploring the realms of depression, social anxiety, and general phobia.

The game begins almost as any working person’s day would. The player drowsily wakes up from their noisy alarm, and slogs out of bed. Then an omniscient, The Stanley Parable-esque narrator pipes into the game, and urges the player to eat breakfast and speed off to work by 7:30am. This is where player choice comes in, as they can listen to the narrator and abide by their instructions, or choose to stay home and wallow in their bleak, dark apartment. “The shadows become encroaching,” said Levall of the apartment’s space, as the lighting fades throughout the day, and the rooms feel claustrophobic. The apartment is a prison but work is just as emotionally draining. The player feels trapped, no matter what the avenue.

Levall’s research for Please Knock on My Door saw him expand from his personal experiences to listening to his close friends’ own stories, to articles written by people who have suffered from any sort of mental illness. It was this research that solidified Levall’s mindset of not creating just an autobiographical game, but a game with a wider range of perspectives. “While it’s based on personal experiences, it’s not my story, you’re not playing through an autobiographical game,” said Levall. He pulls directly from his own personal experiences only when the game benefits from it, such as modeling the drab in-game apartment from his own past home. “As long as I don’t feel it has a negative impact on the experience,” said Levall. “I use things from my own life to help me get inspired.”

“There’s value in having a choice”

The protagonist of Please Knock on My Door is something of an anonymous entity—that’s intentional. As a black cubular being, with surprisingly emotion-filled rectangular eyes that change depending on the player’s mood, the character is ripe for the player’s projection. The anonymous being can really be anyone, no matter the gender or ethnicity, because of its simple shaped existence. As Levall described it, the character is sculpted with anonymity in mind to show that anyone can feel the “black void” that the in-game character feels.

Tackling far-ranging perspectives has always been a singular point of access for Levall. In his game A Can of Soda (2015), Levall explored the value of having different perspectives on life through religion, focusing on the differences and similarities between Christianity and secular humanism. “I don’t want to make up my mind about something, about what I think is right, and just convey that through a game to the player,” said Levall on his use of perspectives in games. “I want to offer a space where the player can make up his or her own mind about what they think about the themes, such as depression, or life philosophies.”

As the day grows on in-game, the narrator barks at the player for either not following his instructions on leading a “healthy” life, or even prods him with inspirational quotes. Something along the lines of “it gets better,” it says. It’s feels like an empty assertion. As the player stares out the lone window in their kitchen, they see a centered tree (which Levall says is a metaphor for the player’s situation), with other anonymous characters in the distance, smoking or staring blankly at their phones. These outside characters are all alone, isolated, just like the player themselves.

Levall’s game is not the first to tackle the experience of suffering from depression, and it won’t be the last. Levall hopes that his game will exist as a tool for others. Its wide-array of choices in the narrative to prove especially useful to players looking for different layers of perspective within the same title. “There’s value in having a choice,” said Levall. “I think we need several different perspectives, made by several different people, in order to be able to offer the gaming community a better array of perspectives, a better understanding of the suffering that people with these issues go through.”

Please Knock on My Door is aiming to be released in Fall 2016. Check out the rest of our coverage of GDC 2016 here.