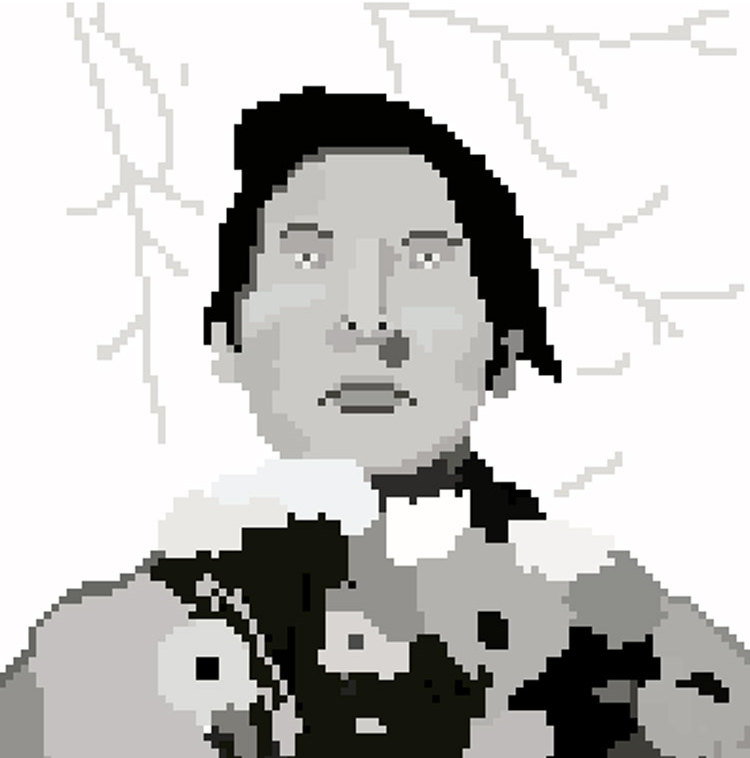 Whether or not you consider games to be works of art, you have to admit, the games industry and the art world are currently two very separate places. Games and art are sold in different marketplaces, covered by different press outlets, discussed in different forums, and taught in different academic departments. There are exceptions to these categorical rules though, and they’re occurring with increased frequency. One such example is performance artist Marina Abramovic’s Kickstarter campaign to establish a physical space for her Marina Abramovic Institute (MAI), which will be dedicated to long-durational artworks. As part of the project Abramovic has commissioned indie game maker Pippin Barr to create original games that adapt MAI visitor activities and past Abramovic performances into videogames.

The games industry and the art world are currently two very separate places.

Abramovic has become an art-world superstar, hobnobbing with Jay-Z and inspiring, apparently, Lady Gaga. Pippin Barr, on the other hand, isn’t quite a household name for gamers, but he’s closely aligned himself with Abramovic. In 2011, he released The Artist is Present, a simulation of sorts of Marina Abramovic’s 2010 performance of the same name at the Museum of Modern Art in New York. Part art world satire and part genuine tribute, Barr’s The Artist is Present requires that you play it during actual museum hours and that you wait in line for the exhibition for hours to get a chance to seat your avatar in front of a pixel-art Abramovic and watch them stare into one another’s eyes. Turns out the real Marina Abramovic played the game and liked it, so much so that she went on to contact Barr about the Kickstarter collaboration.

As part of the crowd-funding campaign, Pippin Barr is creating a game that acts as a kind of interactive virtual tour of the MAI building and the experiences that will be housed inside, as well as 3 additional backer-exclusive Abramovic Method games including “rice counting, stepping on grass, and complaining to a tree.” How exactly these games will look and play remains to be seen. The MAI tour game will use the blocky, low pixel-count visual style of The Artist is Present, but Barr has stated on his blog he’ll be using a more hand-drawn style for the Method games.

It’s a challenge, but one that Barr finds “quite rewarding.”

Performance art has a reputation for stone-faced seriousness, so it will be interesting to see how Barr adapts aspects of performance art into videogame form, seeing as he’s most known for games that make players laugh. His World of Glue game presents itself as a Mario-esque platformer, but where the ground is covered in glue, preventing the player from jumping or doing much other than slowly trudging forward. The result sends up how we expect side-scrollers to play. For the MAI games, Barr must take intensely reality-based activities like sitting face-to-face with a total stranger and somehow make them work in a disconnected digital environment. It’s a challenge, but one that Barr finds “quite rewarding.”

They’re not inherently deadly serious or ridiculous, it’s about the stance of the person experiencing them.

So, as absurd as a game about airing grievances to a spruce sounds, Barr notes that he has to keep his jokey side in check. “The humor thing is tricky. One good thing about the sorts of exercises Marina’s interested in, though, is that they’re really much more about what you bring to them—they’re not inherently deadly serious or ridiculous, it’s about the stance of the person experiencing them. As such, while something called ‘Complaining to a Tree’ might seem ridiculous to people, it’s entirely possible, I think, to commit to or accept the experience and really get something out of it. A great thing about a game version is that it’s even easier to try it out without the ‘risk’ of feeling embarrassed by talking to a real tree.” This is just one way games can help break down certain barriers of accessibility to the artworks.

There’s an outside impression (which is shared by some from within) that the art world is a weird, stuffy and self-serious place; it can seem as foreboding to newcomers as Call of Duty multiplayer is to people who don’t play videogames. But videogames, particularly those you can play alone in the comfort of your own home, provide safe spaces to engage in play and fail without losing face in a social environment. Barr uses humor to mitigate perceived pretensions in art and art games, breaking through their hard exteriors to expose more relatable human qualities.

“The humorous aspect of my games was a big part of what had attracted her to them in the first place.”

Ironically enough, this echoes the way Barr’s preconceptions about Marina Abramovic were shattered by simply speaking with her. “[Upon meeting Marina,] I had, like most people I suppose, expected her to be kind of severe or detached or…something, but in fact she’s very warm, excited, and funny. The humorous aspect of my games (particularly The Artist is Present) was a big part of what had attracted her to them in the first place, and she certainly sees room within performance art and the institute itself for humor.”

It’s great that Pippin Barr’s games can act as gateways to accessing esoteric performance art, but they also function as artwork in their own right. Barr says Abramovic is gracious in this regard. “What I appreciate most about the collaboration is Marina’s willingness to let it be as much about games and what they are and do as it is about performance art or art generally,” he says. “That’s meant spending time thinking about the intersections of the two, and how performance art and Marina’s take on it might ‘look’ in the world of a game.”

It doesn’t hurt to have a globally recognized artist out there promoting the cause.

MAI’s focus on long-durational works seems primed, in concept, to include videogames as well, though nothing official has been announced outside of the Barr collaboration. Certain games, MMOs in particular, can be played in perpetuity, with no fixed “ending” to conclude the experience, and often thrust users into the role of performers as much as players. There’s rich, minable material here for MAI’s consideration, and it’s reassuring to know that Abramovic is lending an ear to someone like Pippin Barr when it comes to the intersection of art and games. On the subject, Barr admitted, “I don’t have a great fix on how games/interactive work might actually feature at the institute as of yet, but I’m certainly hoping to have some input!”

This crossover may or may not be signaling a new paradigm for understanding of games as artworks or vice versa, but it is nonetheless part of a wave of designers and artists who see the distinctions between the two fields as increasingly blurry. It doesn’t hurt to have a globally recognized artist out there promoting the cause. If only within his own work, Barr is already looking to blur those lines further. “It’s definitely been an interesting experience, and it’s led to some very fun source material for games,” he said.

And of those high-profile friends? Barr adds, “If Jay-Z comes knocking, I might be able to be convinced to collaborate.”