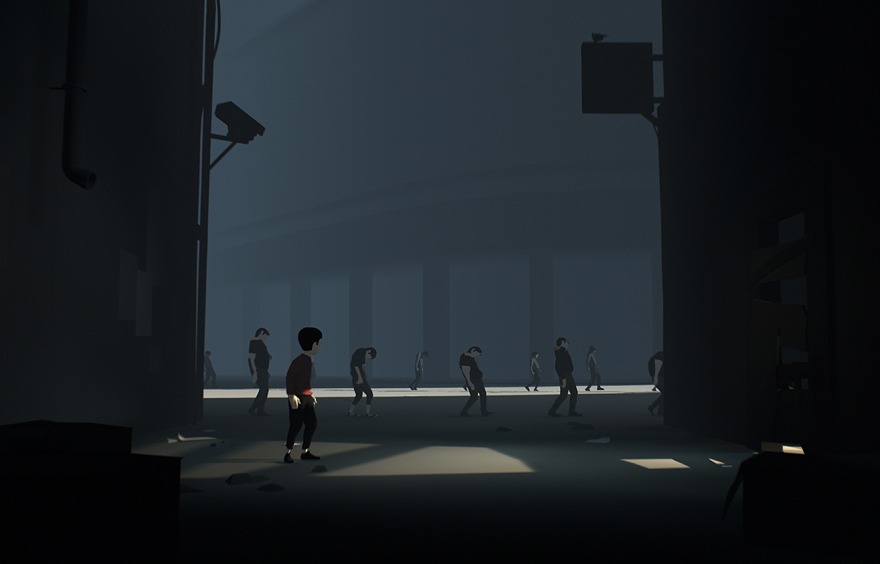 Developer:
Playdead
Platform:
PC, Xbox One
Reviewed On:
Xbox One

Everyone who has ever played Éric Chahi’s Another World (1991) remembers the “Beast.” Emerging from a pool of water, you see a four-legged silhouette perched menacingly on a nearby ledge. The creature then exits to the right. On the next screen it appears momentarily in the background, but you’re distracted by the poisonous worms crawling towards you. By the third screen you may have forgotten about it altogether until crossing an invisible threshold triggers it to appear. It snarls. You run. It chases you. But you didn’t run soon enough, and it catches you, kills you, and sends you back to the pool of water.

But this time you’re ready. You start running immediately. It still doesn’t look like you’ll make it to the rope hanging three screens away, but you have to. This is a videogame after all, and the people who make videogames don’t make puzzles that can’t be solved, obstacles that can’t be overcome. So you keep running. You hope. You jump. And as you catch the rope you exhale, except it’s not the end. It snaps and swings you over to the other side of the Beast. So you run the other way as it closes the distance. You keep running, and three more screens later a hooded figure appears and pierces the creature with a laser. You let out a long sigh of relief—and then he shoots you too.

men with flashlights try to hunt him down and strangle him

People remember this scene because for a few moments it made them forget they were playing a game. Rules and systems crumble and the façade of calculated outcomes fall apart to reveal something more immediate and spontaneous. The boundaries between winning and losing that helped create those moments slip away and all that’s left is the impression of a time, a place, and a feeling.

This is the template for Inside’s success. So clean, pure, and polished, its only residue is the sense of having shared in someone else’s life and grappled with the conditions that propelled it.

When Inside starts, three words appear on the screen: “Press any button.” These are the only words in the entire game. Their unbridled optimism points toward unlimited possibility, but the reality is very different. A small wooded area comes into view while a boy dressed in plain clothes stumbles forward. You can steer him, make him jump, or have him grab hold of things. It’s simple and uncluttered, as if designed for the original Nintendo controller. You can press any button to begin the game, but after that most of them won’t do anything.

The boy is faceless. Just an anonymous lump of dots on a screen. He could be anything, do anything, but this is what the creators decided for him. And then they dropped him in a forest while men with flashlights try to hunt him down and strangle him. It’s a raw deal, and one the rest of the game commits to complicating with every new puzzle, sound, and visual detail. But everything blends together too well to break the game into parts like this.

At one point the boy is running through a warehouse when a dog starts barking in the distance. Keep him running and you eventually see a fence you can climb with a boarded-up door on the other side. But as you get closer the dog appears in the middle of the frame, small at first, but soon much larger as it descends on you from the background. Fortunately, you hop onto and over the fence just in time, pausing to admire the scene before getting to work on the door.

an ambiguity about who is really in control

But the boy is small and there are a lot of boards. Then you notice the dog has left as its barks get quieter. It’s then that Inside pulls a dastardly trick. The dog is not bound by the same side-scrolling geometry as you and the boy. It doesn’t have to hop the fence as you just did. It can go deeper into the warehouse and circumvent it altogether. That’s when the dog stops simply being a narrative set piece to build suspense and becomes part of the puzzle.

Limbo (2010), Playdead’s previous game, delighted in its brutish minimalism. The creators seemed to enjoy shredding the needless baggage that accompanies most videogames as much as their protagonist. No collectables. No dialogue. Not even colors. But Inside takes the conspicuous absences of its predecessor and transcends them. Rather than flaunting a sleek, highly-stylized design, it balances every one of its creative drives—bleakness, desperation, companionship, discovery—in such a way that the experience that’s produced isn’t overwhelmed by its presentation. The shadow it casts can make Limbo feel like a prototype by comparison.

Inside doesn’t eagerly brandish its juxtapositions like Limbo. Instead, they subsume one another. The introduction of color makes the visual contrasts more subtle, and the dynamic relationship between bold foregrounds and detailed backgrounds draws from a more nuanced visual palette. Pastoral scenes give way to industrial spaces. Funnels of light cast harsh shadows. Hurried footsteps followed by the barking of a guard dog cuts through the silence in a way that makes it louder than both. And the interplay of action and reaction, from the player to the boy to the environment, creates an ambiguity about who is really in control that persists long after the final scene.

Traversing Inside requires viewing its objects, structures, and people as interchangeable devices, each to be manipulated in order to open the next door, climb the next ledge, or escape the next threat. It’s an undercurrent that surfaces in more explicit ways as each new act progresses. The tension in using another person in order to save them begins early on with the player forcing the boy off a cliff, but grows more disturbed and layered from there.

Where death offered a through line for Limbo, both thematically and materially, Inside is less rigid, and thus more encompassing. Death is not funny in Inside. It’s cruel and sad, even when it’s unavoidable. Inside‘s boy doesn’t get buzz-sawed or impaled. He gets strangled by strange men or mauled by dogs. He suffocates underwater, choking as the liquid fills his lungs. Inside doesn’t encourage subordinating the flesh in service of experimenting with puzzles. The boy wants to escape and you want desperately to help him. When it does employ dying as a tool, it’s in the service of other narrative elements rather than sadistic glee. The sonic blasts reverberating across a narrow chasm in an underground cavern show the cruelty of the gauntlet laid out before you. When a surveillance machine spots the boy it tazes him and drags him away, insinuating there might be worse things in Inside‘s world than death.

To the degree that Inside has an animating force, it’s one provided by something like the paradox of condition described by Simone de Beauvoir in The Ethics of Ambiguity (1947). “[Men] know themselves to be the supreme end to which all action should be subordinated, but the exigencies of action force them to treat one another as instruments or obstacles, as means,” she wrote. If Limbo was obsessed with the consequences of an action, or their absence, Inside is haunted by the link between control and freedom.

An air of totalitarianism permeates the game. Where Limbo was otherworldly, Inside feels acutely human. Its horrors are familiar and man-made, no matter how strange and surprising they appear in the moment. As the player you control the boy, but sometimes the boy is controlling other bodies as well. Sometimes you get him killed; sometimes he gets them killed. But because he seems unique in some way, surrounded by a world hostile to him—and to you, and your relationship together and its seeming independence from programs running in the background—you push on together and try not to look back.

But this independence is an illusion. “The more widespread their mastery of the world, the more they find themselves crushed by uncontrollable forces,” de Beauvoir wrote. And the closer you and the boy get to the end, the more inescapable it feels. The hierarchy of control is revealed to be something else. Inside is perhaps the closest I’ve ever come to feeling like a videogame was actually playing me.

Developers have mostly moved away from pre-rendered cutscenes in favor of having scenes play out in-engine with the player still in control. Quick-time events are an attempt to make the cinematic playable. Characters keep walking and talking in the background even as you explore a room and analyze its contents on your own. The result is supposed to be more fluid and natural.

Inside breaks down the distinction entirely. Everything is a puzzle. Everything is part of the story. Including you. Its world doesn’t just feel “alive,” it feels seamless, which is why when you search for the strings holding up the puppets, or a man behind the curtain, you won’t find one. Playdead’s greatest feat in creating Inside was making it look like they never created it in the first place.