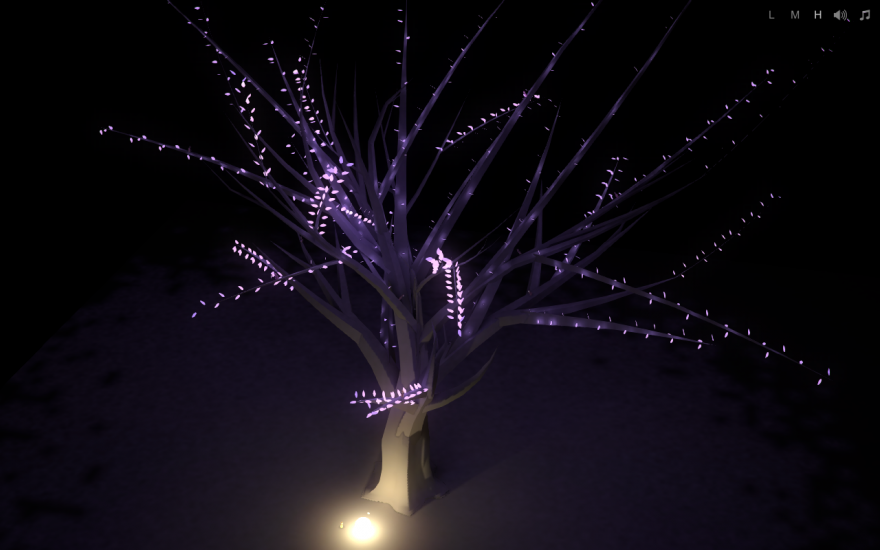 Creator Alexander Ocias calls The Yearning Tree “a quiet space for you,” the player. At first, the muted scene depicting a lonely flame in front of a tree does appear to be yours and yours alone. At the zoomed out angle, even the looming tree stands at a distance, accompanying you only at arms length. The hum of crickets underscores your isolation, on a dark and moonless night illuminated only by the tree’s phosphorescent petals.

You settle into the solitude, as an introspective piano tune encourages your curiosity. With nothing else to do, you use one of the few points of interaction available, zooming in and out of the luminescent bubble you share with the tree, surrounded on all sides by an impossible kind of nothingness.

Then, a tiny speck by the fire catches your eye. Could it be an insect, a rock? To your surprise, after clicking it, words flash across the screen. “It’s nice and warm here,” the speck says, proving itself to be much more than a pebble. Looking closer, a pygmy figure comes into focus. Basking in the glow of the flame, he swivels his head around inquisitively—but not to gaze at you. He looks past you, only reacting to your clicks to divulge more of his inner monologue.

Turning to the tree, you realize an entire host of hidden little monsters are living and breathing up there, clinging to twigs with their tiny monster hands. Suddenly, the space you thought was yours to wallow and want in all by your lonesome self becomes instead a community of yearners, all searching around for some sort of instruction. Just like you were seconds before.

The Yearning Tree houses it all

You climb up the tree, collecting snippets of each monster’s inner world. They may look the same, but beneath the surface ranges the downtrodden to the hostile. The little monsters wonder idly about the world around them, plagued with questions about the parts they cannot see for themselves. Calling out to no one in particular, many of them wish for some version of a better world, to help themselves or others, making promises they can’t keep to try and do their part and change it. The Yearning Tree houses it all. Our fears and desires, all twisted into its bark, branches reaching up permanently.

Despite the commonalities in their inner thoughts, all the pygmy monsters remain separated, never acknowledging the others living on the same exact tree. Like you, they believe they are alone in their introverted reflections. Standing on different branches, all of them looking up (believing themselves islands), you—the player—connect their threads into one collective whole. As the omnipotent entity and witness to their confessions, you see the full picture. Though their desires differ and each little avatar stands on a separate branching path, they’re all part of the same foundation—all their branches reaching up to the same sky, all of them wanting.

You can play The Yearning Tree for free on Windows, Mac, and Linux, or just play a quick version on your browser. Follow creator Alexander Ocias on Twitter and check out his website for past titles.