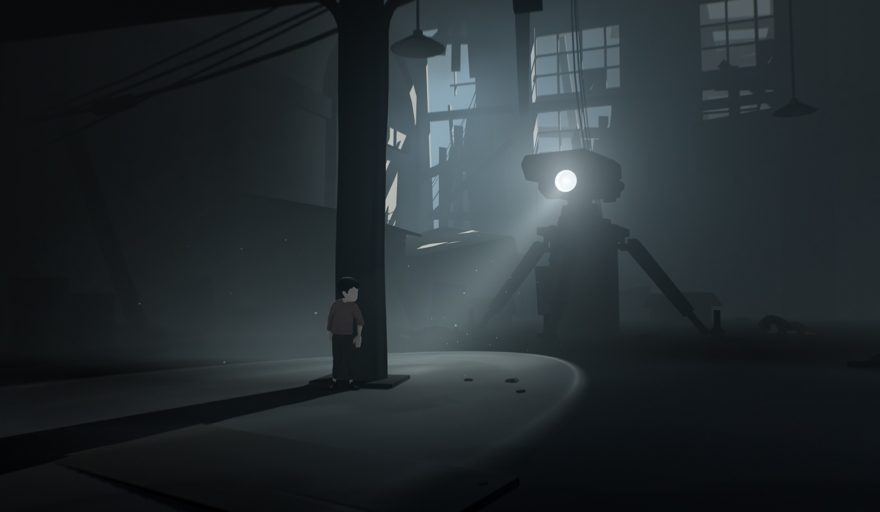 It’s been six years since black-and-white sidescroller LIMBO (2010) came out. It might not feel that long—it doesn’t to me—due to it having lingered with an almost ghostly presence over the world of videogames. Small or large, it didn’t matter, many games have since adapted LIMBO‘s foggy chiaroscuro and quiet, morbid world for their own stories. You might think then, given that length of time, as well as the lasting paucity of LIMBO, that the studio behind it, Playdead, would have moved on. Plus, surely, the two-tone 2D landscape was made out of necessity; don’t they have wilder dreams to realize off the back of its runaway success?

Well, take a look at the new trailer for INSIDE, and you’ll see that while, yes, Playdead’s second game is bigger, more animated, and has crowds of people rather than a single running-and-jumping boy, the tone is wholly familiar. Playdead, as is perhaps given away in its own name, is a studio interested in foreboding scenes of overhanging darkness and young boys in a lot of danger. With LIMBO, the studio struck down hard with a determined style, and hit it off big. And now, with INSIDE, it looks like the studio is going to take the same idea and weave it with an eerie sci-fi tone fitting of both the Cold War and the 1953 movie adaptation of The War of the Worlds. Large stabby spider legs and spear-throwing tribes are replaced by men with flashlights, pick-up trucks, and guns.

The world of INSIDE seems to be one made to make you ask the question: what kind of people would be so willing to shoot a small boy dead? You can see this happen in Polygon‘s 10 minute footage of the game in action. The boy hops over a wall—after pushing over a block to reach its top—sneaks past some guardsmen in the background, before being chased by his pursuers into a trap. POP. POP. His chest bursts open with the impact of the bullets and he dies. Grim.

assembly lines of humans are overseen by steel robots

The impassiveness with which this violence is presented totally resembles LIMBO‘s silent approach to death and the killing of children. It’s Playdead’s way of communicating two things: 1) You fucked up, try again; and 2) This is a nasty place, take nothing for granted. This is why there’s a totally serious moment when an angry pig wakes up and chases the boy, charging him as if it had horns to do any damage with—everything in INSIDE wants its main character to die as immediately as it spots him. Suffering isn’t an option; it’s gotta be instant, bloody death.

A little later in the footage we find out why this might be the case as a machine-guarded facility is traversed and the sunken city beyond it is explored by way of single-person submarine: welcome to dystopia. The most telling detail here is the technology on show. It is not modern, in fact, it’s perhaps closest to the future envisioned by George Orwell in 1984 (1949), one in which assembly lines of humans are overseen by steel robots, and not the other way around. The fact that there are armed men driving around in military-like vehicles shooting runaways, while we’re also shown large halls of people sat around occupying their time, suggests that a robot manufacturer (read: corporation) or a government has got away with ruling this darkened land with violence and surveillance.

What is the big fear that they have used to pin down this population, though? That’s the big unanswered question. You’d typically expect to see propaganda plastering walls to tell this part of the world’s background, but it’s either in short supply or completely absent. However, perhaps it isn’t needed at all. In one scene, the boy happens across a device that looks like an upturned sieve, which sucks onto his skull and allows him to control the adults in the background as if they were puppets. He flings his limbs around and they copy the motion. It’s the kind of invention that drives scientists mad and turns bullies into dictators. You can see where this is going…

INSIDE will be coming out for Xbox One on June 29th and Steam (for PC) on July 7th. You’ll be able to pre-order the game on its website.