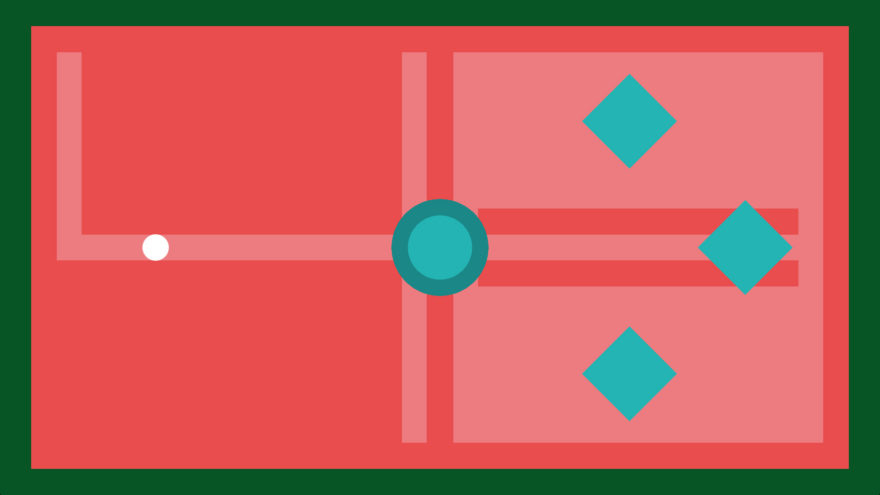 Some visual styles become particularly entrenched in games. The continual quest for photorealism drives graphics technology towards lots of different ways to light scenes and throw particles all over the place. Different engines and art teams end up producing something like house styles—DICE’s Frostbite engine means the upcoming Battlefield 1 is lit a lot like Battlefield 4 (2013), CryEngine’s lush environments look pretty similar in Far Cry 3 (2012) and Far Cry 4 (2014), and in games more far afield like Monster Hunter Online (2013).

THOTH suggests that the arcade resembles a gallery

Even in games that come out of much smaller studios, certain lo-fi looks rise and fall in popularity. For a while there were lamentations about affected retro styles like “pixel art,” and some folks are insistent that games made in Unity all look alike.

When games look completely outside that pedigree for visual inspiration, the result is something that looks as striking as THOTH. Produced by Double Fine and designed by Jeppe Carlsen of Playdead (y’know, the creators of 2010’s Limbo and this year’s Inside), THOTH suggests that the arcade resembles a gallery.


It plays as a twin-stick shooter but borrows the simple shapes and bright pallets of mid-century design—the almost psychedelic colors of the backgrounds from Looney Tunes cartoons and stark lines like the patterns on Saul Bass posters. Additionally, it features music from avant-garde electronic artists Cristian Vogel & SØS Gunver Ryberg of SGR^CAV, a duo that has released tracks that are sometimes very material and physical and other times chirpy and clearly digital.

Gallery-bound visual art, arcade-focused game design, and avant-garde sound art don’t tend to hang out in the same places all the time (or at least, not in projects backed by a publisher as well-known as Double Fine). But this isn’t Carlsen’s first solo outing, and his previous, award-winning musical game, 140 (2013), managed to pull it off pretty well. That said, he’s described THOTH as “anti-140,” in that it has “no rhythms, no loops, no timed sequences,” whereas 140 was all about that. Intriguing.

THOTH is coming out in October. You can find out more about it on Steam.