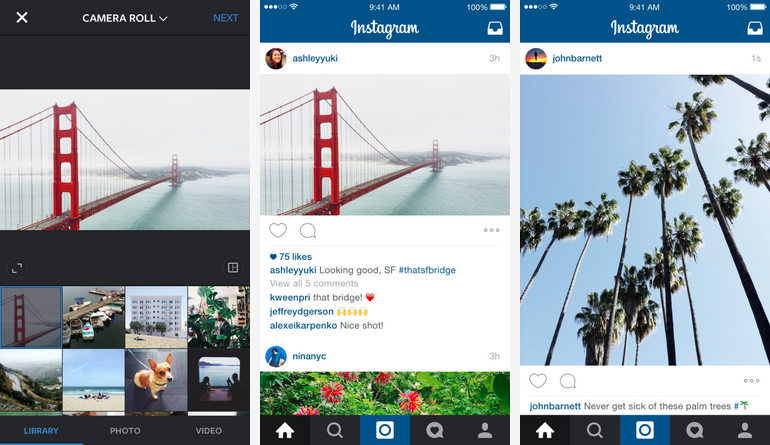 Instagram announced on Thursday that its signature 1:1 aspect ratio was no more. An update for Android and iOS clients will allow users to upload full-sized portrait and landscape photos. The square will remain Instagram’s fundamental unit, but its value as a cultural currency has been devaluated. Without the hassle of using third-party apps or aggressive cropping to fit images into a square frame, one can only expect the proportion of oblong images in Instagram feeds—currently estimated at 20%—to increase.

As The Verge’s Ariha Setalvad points out, this is good news for tourists at the notoriously tall Eiffel Tower. It is also good new for all but the most rotund fashionistas, who previously “[had] to choose whether to crop out either their new haircut or their new shoes.” Fair enough. Those people are surely happy about this. But that doesn’t mean this change is the greatest of ideas.

The square created a language

Instagram’s square frame was always limiting, but it was also interesting. For better or for worse, it encouraged specific forms of visual composition. The best images on Instagram were often those that made the most of these constraints. Some subjects, such as food photography, benefited from Instagram’s aesthetic. Other subjects, as Setalvad’s Eiffel Tower example attests, could not thrive in this environment. That was the trade-off inherent in Instagram: It was not suitable for everyone or everything, but it was more interesting for this very reason

What is Instagram without the square? Now, more than ever, it is Apple’s camera app tethered to a larger social network. It is another feed of images in a digital world teeming with feeds of images. It is, above all, another victory for hardware at the expense of software. If a camera can take landscapes and portraits, I should be able to share landscapes and portraits, goddammit!!! Instagram is a layer of technological intermediation between your camera and the world. By way of intermediation, it imposes its opinions, such as what constitutes the optimal aspect ratio, onto its users’ images. Instagram is more than a pure conduit because of that. Remove those opinions, however, and Instagram is just a reflection of a camera’s capacity.

Users do have recourse against these opinions. Writing about the attribution scandal involving Instagram celebrity “The Fat Jew” (née Josh Ostrovsky), The Awl’s Brian Feldman noted, “Adding repost functionality [to Instagram] has become a cottage industry.” A similar industry devoted itself to escaping the tyranny of the square. Thus, Instagram’s Ashley Yuki told Ariha Setalvad “For the average person, one in every five stories in their feed looks like it’s natively supported in our app, which is not great.” These “not great” moments can be solved by appending functionalities that snuff out lesser implementations. This is how Twitter came to have the retweet and why Instagram now supports a plurality of aspect ratios. The add-on section of the App Store functions as an outsourced R&D lab, gradually expanding the worldview of popular apps.

How, then, does a large company tell the people in its R&D lab that their opinions are wrong—not wrong in any objective sense, but wrong in terms of what the mothership seeks to achieve? Ashley Yuki’s feed problem could be solved by discouraging letterboxing, but that would involve telling users that they are incorrectly employing Instagram. The customer can always—or at least frequently—be right, but that requires the app to be wrong on a regular basis. The customer is admittedly sometimes right, as in the case of Twitter’s retweet function or the calls for better attribution on Instagram. It is nevertheless hard to look at the evolution of the app ecosystem and not think that, on the aggregate, apps are growing less opinionated instead of developing smarter opinions.

Instagram’s square frame was far from perfect, but at least it gave the app a worldview. It structured user behavior and the aesthetic of shared images. To that end, Instagram has rarely made full use of the devices on which it operated. But much as new games really, really don’t need to make the most of VR technology just for the sake of making the most of VR technology, photography apps don’t always have to make the most of cameras. There will always be another app for that, and it may be worse off for its lack of convictions.

The square is dead; long live the square!